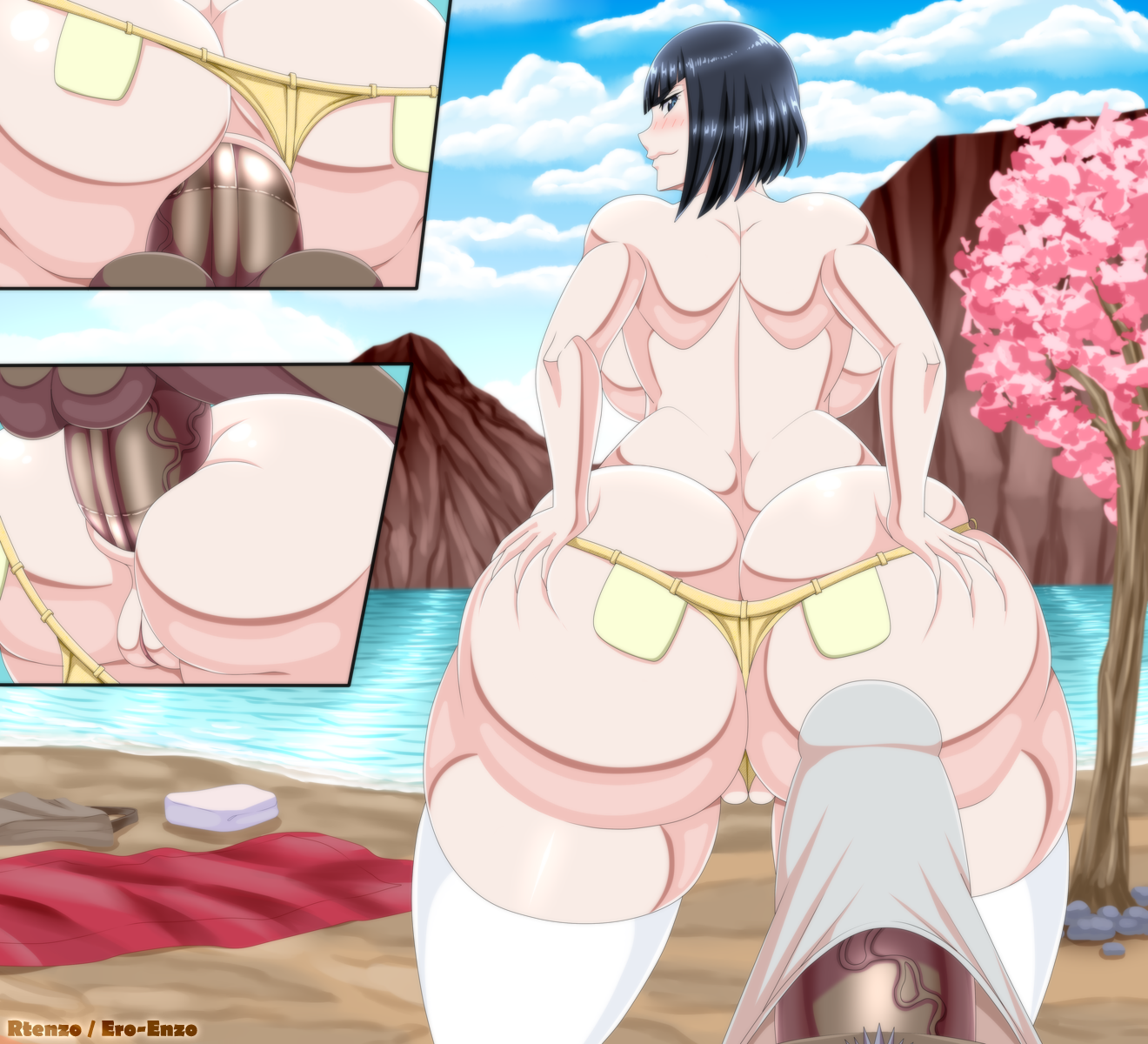 Satsuki Kiryuin sat in the back of a large SUV as it drove along a rough patch of road. The high end suspension and tires made the ride feel as though it were a well kept city street, making the trip fairly comfortable. Next to her sat Rei Hououmaru, looking nervous as she looked at the tablet she held in her hands.

“Something wrong?” Satsuki asked her.

“N-no Milady,” she told her, glancing again at her hair, “I just, why cut your hair again?”

Satsuki smiled and ran her fingers through her once again short cut hair, “I had my reasons. Why, does it look bad?” she asked her.

“Thank you.” Satsuki said as she crossed her legs and looked out the window. She was dressed in a pair of extremely short shorts that barely even qualified as panties, let alone shorts. A pair of white elastic stockings and hiking boots, and pulled over her heavy breasts was a three sizes too small t-shirt. All of her clothes were mixed with dormant Life Fibers awaiting activation.

Rei herself was dressed in a very light gray pantsuit much like she always wore. Satsuki had been trying to get her to wear more relaxed attire when they weren’t at work, but old habits and all…

“Will the other’s be meeting us where we’re going?” Rei asked.

“No, not today,” Satsuki told her, “I’m taking us to a place I went once before the building of Honnoji Academy. While my Father was still living with mother and I.”

The flush on Rei’s cheeks deepened, “I, I’m honored, Milady.” she said.

Satsuki just smiled at her, Rei could be so cute when she was flustered. It was a far cry better than the emotionless expression she always had when she worked for Ragyo. She still tried to hide behind that mask, but Satsuki could see beneath it now. And just how infatuated Rei had become with her.

The SUV began following a long curving bath up into the mountains, the road was barely even passable for seasoned hikers. So even with the top of the line shocks, the ride became bumpy as they moved along the path. The road then opened up as they reached the end a few minutes later. Satsuki smiled at the look of awe on Rei’s face as they emerged from the forest into an idyllic landscape.

“Oh, wow…” said Rei as she leaned closer to the window.

“I know.” Satsuki said as she smiled while the car pulled to a stop. The two of them then stepped out into the sun and looked out at a small pond surrounded by miniature mountains and small sakura trees that never seemed to get any bigger.

Closing her eyes, Satsuki inhaled deeply, everything was the same, the sights, the smells, even the warmth of the sun here. Rei moved over by the water’s edge and laid out a large beach towel and set her bag down next to it. The dark haired girl then gave a nod to the man driving the SUV and he backed the car out of the area and turned to leave.

“Huh!?” Rei gasped when she turned to see their ride leaving.

“I just wanted a little privacy is all.” Satsuki said.

“Priva…cy…?” Rei echoed as Satsuki reached down to grab the edge of her shirt and pulled it off, exposing her big heavy tits as she began walking towards the water.

Satsuki grinned as she heard Rei gulp audibly and turned her head back to see the massive tent rising in the woman’s pants. It was a good thing Rei’s clothes were also infused with life fibers, otherwise that erection would have ripped right out of her pants!

The dark haired girl turned around fully, her heavy breasts jiggling with the motion. She licked her lips at the way Rei’s cock twitched in it’s confines as she walked over to her, making sure to sway her hips with every step.

“My my, is that for me?” Satsuki asked as she licked her lips. She stood flush against Rei as she ran her hand along the length of her cock through her pants. She then grabbed the waistband of her pants and pulled them down, smiling at the sight of the petite woman’s gigantic throbbing erection. The sight of it made Satsuki’s pussy ache to feel it sliding in and out of her as she pressed her mouth to the tip of Rei’s cock and kissed it lovingly.

“Mi…Miladyyy…” Rei breathed softly as Satsuki sat her back on the beach towel and slowly dragged her heavy tits along her length. She then slowly stripped off the woman’s pants before moving to lick her dick from the base to the tip. Rei let out a soft sound as Satsuki kissed the tip again before dragging her tongue back down the underside of her dick.

“Mmmmmmmmmmh, you like that?” Satsuki asked her in a husky tone before she began licking and sucking on her cantaloupe sized balls.

“Hoh, you think my mouth is sexy?” Satsuki asked as she kissed her way back up to the tip of the mocha skinned woman’s cock.

“I… Ahhhhh…!” Rei began, but then moaned as Satsuki opened her mouth wide and engulfed the top several inches of her dick. Her jaw ached deliciously as she felt her throat bulging with the sheer girth!

“GUH GUG, GUGH GUGH GUH GUH…” Satsuki choked on Rei’s cock as she began bobbing her head up and down quickly. Taking the massive length deeper and deeper with every motion, she moaned in pleasure as she could feel the tip pushing into her very stomach!

“OH YESSSSSSS…!” Rei moaned in pleasure as she reached her hands down to grab hold of Satsuki’s head. The dark haired girl smiled inside as Rei began pumping her head up and down on her pole, fucking her mouth and throat! Satsuki felt her pussy spray in orgasm as she came hard, soaking the crotch of her shorts and sending trickles of her juices running down her thighs.

“GUGH GUG GUH GUG GUH GUG!!!! YESSSSH, PHUCK MUH MOOUUPH!!!” she gagged and slurred around Rei’s cock as her eyes rolled back in her head. “HAWDER, HAWDER, PHUCK MUh MOUPH MOARRR!!!” she moaned as she rocked her hips from side to side in wanton lust. The fabric of her clothes began glowing a soft red under the light of the sun as her ecstasy began to trigger the Life Fibers within.

“MILADY SATSUKI, MILADY SATSUKIIIII!!!” Rei moaned as Satsuki gagged and moaned around her cock. Satsuki then pulled her head free as she felt Rei’s cock throbbing inside her throat.

“Mmmmmmmh, yes!!!” she gasped then turned around to present her ass to Rei. “Don’t hold back Rei, take me! Loose all of your lust and desire into my ass!!!!” she told her as she pushed her shorts down just enough to loosen them from her butt, pulling the crotch aside to expose her ass and cunt to the other woman.

“HMMMMMMMMMMMH!!!!!!” Satsuki then groaned as Rei was instantly on top of her, her huge cock pushing up her asshole, stretching her wider than she could ever remember being stretched! “YESSSS, RIGHT THERE, MY ASSSS, FUCK MY ASSSSSSS!!!!” Satsuki screamed as Rei bucked back and forth atop her. Satsuki’s back rocked back and forth, her tits swaying with her motions until Rei reached around to grab them and squeeze them in a pair of vice-like grips. She could feel her stomach stretching up and down from the massive length of Rei’s cock.

“MILADYYYY, AHHHH YOUR ASSS, I LOVE YOUR ASSSSSS!!!!!” Rei howled in pleasure as she slammed her cock in and out of her even harder.

“MMMMMMMMMHHHH!!!! YESSS, FUCK ME, FUCK MY HOLE TO YOUR HEARTS CONTENT REI, I LOVE THE FEEL OF THAT GIANT DICK INSIDE ME!!!” Satsuki screamed. “OOOOHHH SO FUCKING BIIIG, MY ASSS, MY ASS IS SO FULL, I CAN FEEL YOU FUCKING MY STOMACH!!!!”

“MMMMMMMH, MILADYYYY, I LOVE THIS!!! I LOVE FUCKING YOUR SEXY BODY SO MUUUUCH!!!” Rei moaned as she and Satsuki shifted positions, Satsuki moving to straddle Rei’s lap, her cock still buried in her ass as she bucked herself up and down quickly. She looked down at her stretched out stomach, loving the sight of it as she pushed herself all the way down. It amazed Satsuki at how much she could take in as she began moving her hips in long slow circles, stirring Rei’s cock inside herself.

“HMMMMM, YESSSS, THAT’S IT REI, MORE, THRUST YOUR COCK UP MY ASS HARDER, FUCK MY ASS UNTIL IT LOSES ITS SHAPE FOREVERRRRRR….!!!” she screamed in raw lust as the clothes both of them still had on began glowing brightly even in the afternoon sun.

Both women screamed in ecstasy as they came together before Satsuki fell on top of Rei in a panting heap. Her body ached in a wonderful way as she continued to lay on top of Rei while her body recovered.

“Ah, hah, hah, hah….” Rei panted beneath her as Satsuki rested her head next to hers. “…love you…” she heard Rei breath softly.

“Ahhh, that was a productive session.” she said to Rei, “I told the driver to return in three hours, what do you say to having a quiet lunch before then?”

Rei got herself up and nodded, “Right away Milady Satsuki.” she said in her usual formal tone.

As she went about setting up their meal on the still clean section of the towel, Satsuki said, “I’m very fond of you as well Rei.” then smiled as Rei dropped the thermos she was holding, spilling the tea onto the ground with a soft splash.

Incredible KLK chapter Sailorlo, I really like how it turned out with Satsuki and Rei are growing more closer with each other. I can’t wait for next chapter. 😁👍👍

Thanks, I really enjoy writing them together. I hope everyone enjoys the stuff I have planned for them going forward.

Just another great chapter!!! The artwork is crazy good and satsuki looking thick as hell and it’s amazing. Another great chapter between satsuki and rei as she fucks her pussy and ass with her massive big black cock! Excellent.
8.5/10

Thanks man, really glad you enjoyed it! I really like this pairing, and have a lot of plans for them going forward.

How about big enough to rip right through? I’ve done that a couple times. 🙂

Is it just me or does short hair Satsuki actually look more related to Ryuko? And what would happen if Ryuko and Rei got together. Would Satsuki get jealous?

This was an extremely adorable story as we see these two’s relationship develop further. I also like the description of Rei almost bursting her pants due to her erection. So great job, very cute story 🙂

Thanks, glad you enjoyed it.

I had a lot of fun doing this one. I think short haired Satsuki is sexier than the long haired one. Kinda makes her seem more open to having fun.