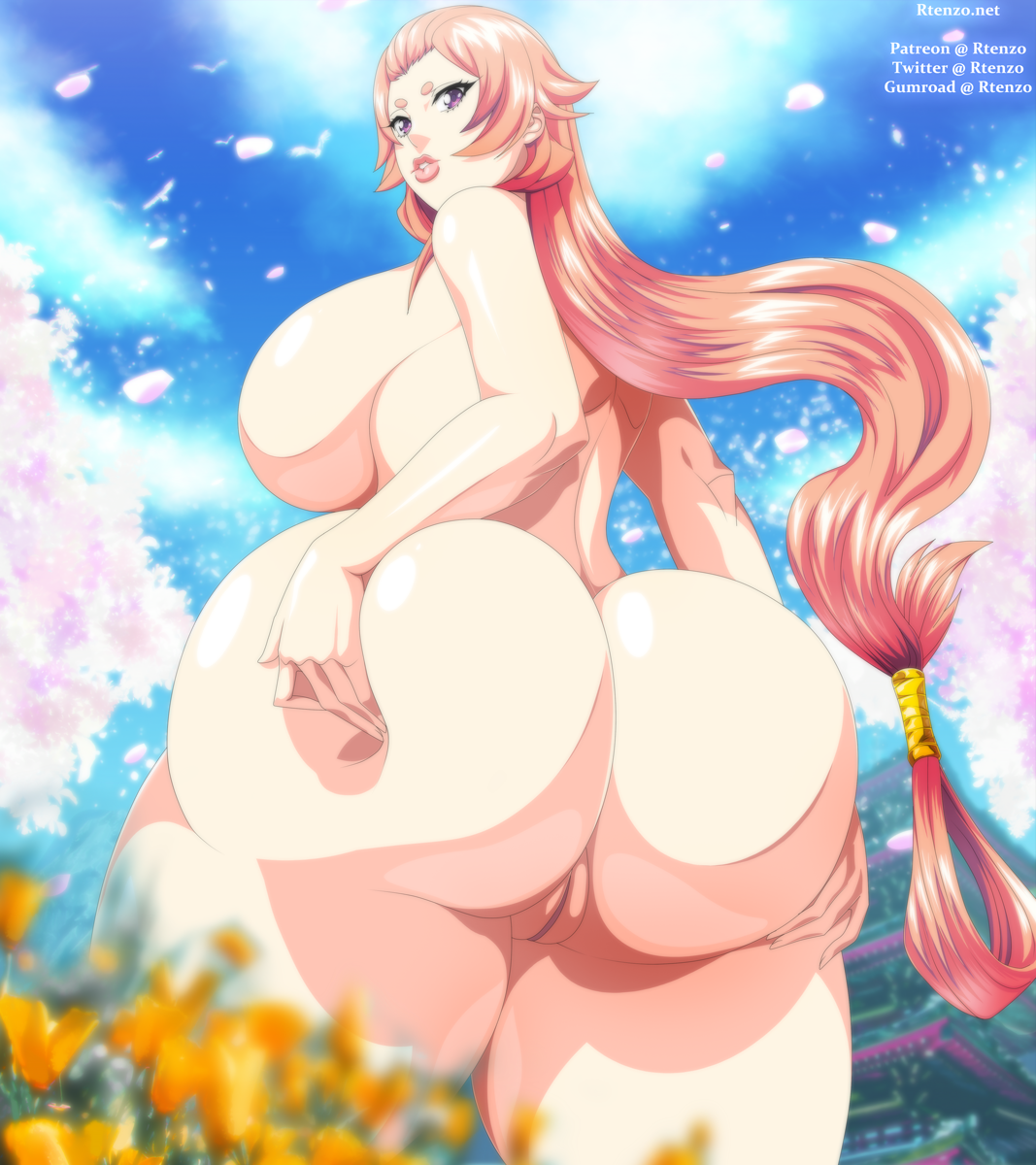 ‘I wonder why Erina texted me and asked to meet me all the way out here?‘ Soma wondered to himself, even as he admired the scenery. It was an out of the way place, with an old-fashioned building, a field of flowers, and numerous cherry blossom trees, all in full bloom.

“Good, you’re on time. Given your plebeian upbringing, I wasn’t sure if you would understand the importance of punctuality.”

Jumping at the smooth, cultured voice behind him, Soma whipped around…and stared, his face slowly turning the same shade as his hair.

Mana Nakiri looked coolly back at him, hands on her hips. She didn’t wear a single stitch of clothing on her body, and seemed completely unphased by her nudity.

“…what do you mean, I’m on time?” Soma asked warily, doing his utmost to keep his eyes on her face. “I’m meeting Erina.”

“Oh, that. I’m afraid that was a trick to get you to come out here,” Mana admitted shamelessly. “I thought that if I contacted you myself, you would be too wary to attend.”

A sweatdrop grew on the back of Soma’s head as he stared, deadpan, at Mana. “So instead you used a fake text from your daughter to lure me here?”

At Mana’s nod, Soma face-palmed. ‘I’m never going to understand this family.‘ Lowering his hand, he asked, “All right, so here I am; what do you want?”

“As blunt and tactless as ever.” Walking past Soma, almost brushing his body with hers, Mana stared out over the field before speaking over her shoulder. “Against all odds and expectations, you managed to impress me with your cooking, something I had thought impossible from a lowly cook like yourself.”

Having heard similar insults many, many times before from her daughter, Soma remained quiet and waited, trying to ignore his steadily hardening cock.

“I found myself wondering if your talents extended to other areas, ones that I have also been bored with for quite some time.”

“…you want me to fuck you?” Soma asked in disbelief. That had been his first, wild impression, but to actually hear her say it was something else entirely.

“Crudely, but accurately, put.” Mana ran her hands over her body, emphasizing her curves, finishing by cupping her round ass. “You see I’ve been aware of how often you pleasure my daughter’s mouth not only with your cooking but with your body…”

The revelation caused the red haired chef to tense up “H-how do you know about that?!”

Mana chuckles “My sister-in-law and her daughter like to gossip at the dinner table… no topic is off limits between the two, even among the company of other family members.”

“…you know what? screw it. This whole situation is nuts; I might as well enjoy myself. Sure, go ahead, and then I’ll give you the fucking you need.”

Mana’s eyes gleamed. “I’ll hold you to that.” Turning and gliding forward, she gracefully sank to her knees and freed Soma’s cock from his pants, blinking at the sheer size of it. “Hmm…perhaps you can back up your claims after all.”

Soma’s smart remark was swallowed up by a gasp when Mana began to slowly lick his cock all over. He could feel it going over every nook and cranny, until his shaft and balls alike were dripping with her saliva. “Shit, that feels amazing…” he breathed.

Impressed despite herself with the size and girth of Soma’s erection, which was stretching her jaw, Mana licked and sucked with careful precision, aiming to maximize his pleasure as quickly as possible. She rubbed her thighs together as a wet warmth began to build in her pussy.

Soma gave her a bright grin before plunging his dick into her. She arched up with a hiss, her fingers digging into the grass and dirt. He went hard right from the start; if she wanted to experience ‘crude’ and ‘unsophisticated’ fucking, then that’s what he would give her!

“Ah! Oh! Mm! Hm!” Mana gasped and grunted softly, her toes slowly starting to curl as pleasure built steadily in her body. She could feel her nipples harden as well as she tossed her head around, her hair spreading around her like a halo.

“You like this?” Soma asked confidently, locking eyes with her. Mana’s face was flushed now, a hint of sweat on her brow, and it made her look even sexier and hotter. She nodded, eyes half-closed with pleasure. “Then buckle up, because here comes desert!”

Mana let out a squeal as Soma pushed her legs even further, her ankles close to her ears; this allowed him to really pound her, as if her pussy was a nail and his cock was the hammer. Her whole body was coated in sweat, and her pussy was dripping steadily onto her thighs.

It was some of the best sex she had experience in years.

Grunting and panting, Soma fucked Mana with all his strength, until, with a combined scream of pleasure, they both came. Soma’s seed poured into Mana’s tight, hot pussy as it gushed with love juices, staining both of their thighs.

Staggering back, Soma wiped the sweat from his brow, only to be abruptly tackled to the ground! Landing with a grunt, he looked up at Mana, who had a strange look on her face as she straddled his body.

“Congratulations. For the first time in a long time,” Mana’s eyes were sharp and her smile was the biggest Soma had ever seen on her face, “I’m very, very, hungry.”

So saying, she plunged her body down, moaning as Soma’s dick pushed into her ass.

“So I hope you’re ready for a long day and night of…cooking.”

10/10 This is an amazing story. The interaction between the characters is superbly spelled out. And you can have more stories with the participation of Mana and Soma.

Thanks man! thrilled you enjoyed the story! 👍

Soma must fuck Leonora too.

She hides it under that kimono outfit

I like Leonora but I LOVE Mana’s character design

More MILFS are always welcome, I like the pose she’s in and I really liked this story, good job everyone I will be looking forward to more of her.

Thank you ungrateful I really appreciate that you enjoyed the story

That was HOT and a great surprise to see Mana. I didn´t expect this and Mana looks great especially breast and ass. Mana should be prepare to fight with her daughter for Soma in a different type of Shokugeki. It will be a great duel when we can be sure that Soma will be the winner. Maybe we will see Alice and Leonora again. 10/10

It was only a matter of time before we ended up seeing Mana on here, and she’s even more of a authoritarian nympho than her own daughter. Not to mention quite the looker.

Anyway, that was a fun little chapter. Soma had to experience the full force of Mana, who is also something of a nudist here huh? Well then. I welcome this.

I can only wonder how things would go if he sees Alice’s mom. XD

Overall like this. Nice work. Looking forward to seeing more. 😀

HOT DAMN! Now that was something I didn’t expected to see! Rtenzo you did an excellent job with this artwork here! The mother of Erina Nakiri looks so sexy and attractive as heck with her naked body and huge ass. Though I don’t know much about her is still an incredible display. An outstanding 9.5/10 in my book. 😁👍

Still, it was pretty good.

I thought about that too but I recall Mana vomits out anything she doesnt like because of her super God Tongue, and I felt that would have derailed the entire scene

Yea Mana does not appear until the final arc of the series. I’m happy you like the picture! thank you for commenting 👍

What a wonderful milf surprise to wake up to! My god momma nakiri looking fine as fuck! Her ass looks a bit smaller than her daughter’s but you can’t tell erina got some good thick genes! And who better to fill and destroy some nakiri pussy and booty then the best cook around soma kun. This story Is quite great I must say as soma finally broke as the actions of the family drove him to just fuck them all, the writing is also great as well as mama nakiri knows soma’s bed skills cause alice and her mother are gossiping whores. Gold star all around on this!
9/10

Erina got all the thicc genes from mama mana lol I’m pleased you enjoyed the story, especailly the part about Alice and Leonora lol 👍