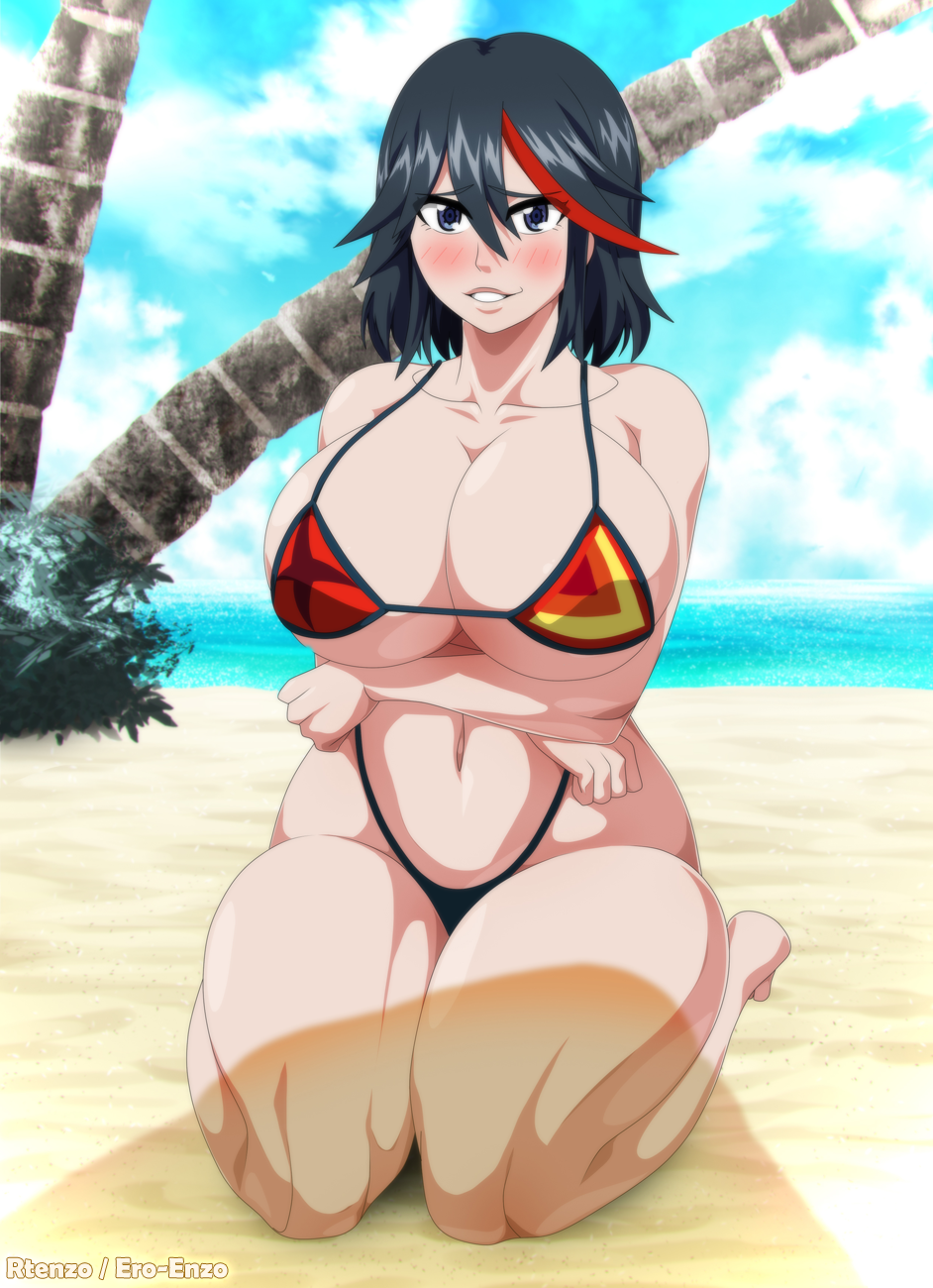 Satsuki was, even now, after everything had settled down, still an evil, manipulative bitch.

…okay, so maybe Ryuko was being a little too harsh on her sister, but as she knelt on the sand, wearing nothing but a very skimpy bathing suit, a smile, and a blush, she couldn’t stop thinking about how this all gotten started.

All she done was ask Satsuki about the reports she had been reading the night before. Then they started talking about how things were still bad in places but getting better; that lead into Satsuki telling Ryuko about her ideas for various fundraisers and charity events.

Somehow, by the end of it, Satsuki, that silver tongued demoness, had gotten Ryuko to agree to do some swimsuit modeling and let the pictures be sold to benefit a local charity.

Once she realized what had happened, Ryuko was not happy, but she already agreed, and it WAS for a good cause…

So here she was, doing her best to follow the instructions of the photographer while the damn swimsuit showed off all of her body. Yeah, she had gotten used to fighting in Senketsu, but that was fighting and Senketsu made her stronger, so she actually got a benefit from dressing like a slut. This skimpy thing was designed to show her body off for perverts; there was no way she would ever wear it for actual swimming, that was for damn sure. It would probably get knocked off by the first strong wave.

Breathing a sigh of relief when the photographer told her they were done, Ryuko stood, brushing the sand from her knees. She wanted nothing more than to change back into her regular clothes and enjoy the rest of the day.

The familiar cry had Ryuko turning into surprise, just in time to catch the ballistic missile that was Mako as her hyperactive friends glomped her. The impact sent Ryuko staggering back a step, and she could feel her blush return as Mako happily rubbed her face against her breasts. “Mako?! What are you doing here?!”

“I wanted to spend the day with you, but you weren’t home, but then Satsuki told me where you were,” Ryuko renewed her vow to get revenge on her sister, “and so I came right over!” Mako told her, all in one breath, smiling up at her, making Ryuko smile back.

“Wow, you look so sexy!” And there went Mako, darting around her like a hummingbird on a caffeine high, looking at Ryuko from every angle and making her feel even more flustered and embarrassed. “I think your boobs and butt have gotten bigger; I’m so jealous!~”

Ryuko blushed harder than ever before shouting (she did not squeal or shriek, and anyone who said otherwise was a damn liar) when Mako grabbed her ass with both hands, giving it a quick squeeze, before releasing that set of soft mounds and grabbing Ryuko’s other pair, groping them vigorously.

“MAKO!” Ryuko yelled, managing to get away from her very affectionate friend. She took a deep breath, intending to keep from yelling, but found herself cut off yet again when Mako grabbed her hand and started pulling her toward the water. “Wait, what are you doing?!”

“We’re at the beach and you already have your swimsuit on and I’m wearing mine under my clothes because all of my underwear was dirty, so let’s have a fun day swimming and getting some sun, Ryuko!~” Mako told her cheerfully, still pulling her along.

Sputtering, Ryuko continued to half-heartedly try to free herself, knowing deep down that she was going to end up doing what Mako wanted.

Well… there were worse ways to spend the day.