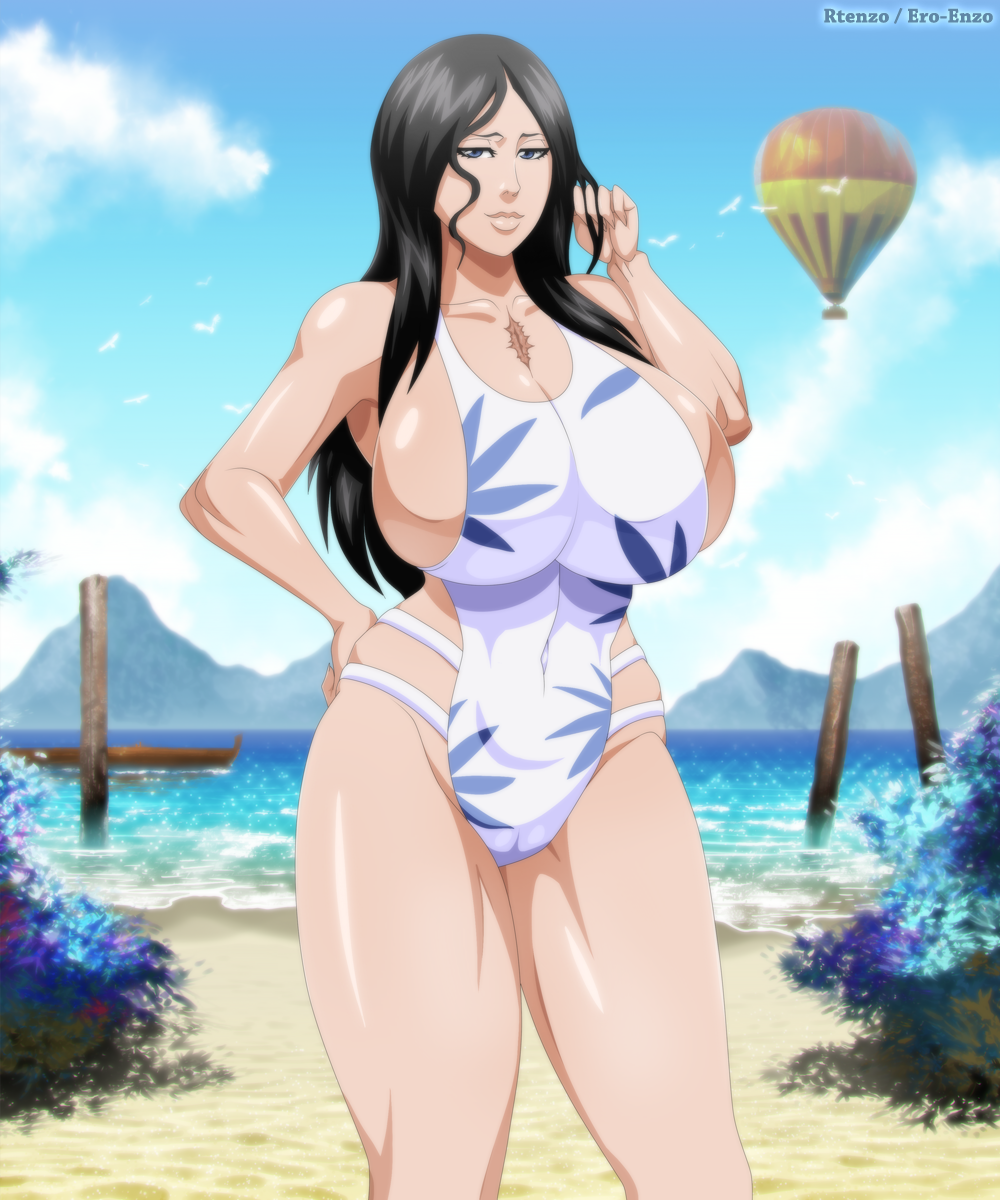 Walking along the beach in her new swimsuit, Retsu Unohana smiled as she looked back at Toshiro. The two of them were just outside her condo at the resort, and she couldn’t help but smile at the naked youth’s embarrassment at his own nakedness while she herself wore a one piece swimsuit.

She smiled as she turned around to face him and said, “Alright, I was planning to do this when we were more out in the open, but…” she told him as she hooked her thumbs into the shoulder straps of the bathing suit and pulled them away and down, stripping herself naked in front of him. She smiled again at the way he gulped at the sight of her naked body as she stepped out of the swimsuit and draped it over her shoulder before continuing on. A little farther out onto the beach they came across a spot Retsu had set up earlier that day with a lounging chair and umbrella already in place.

Laying back on her lounge chair on the beach, former Squad 4 Captain Retsu Unohana savored the feeling of the hot sun on her naked skin. Even after several years, she never got tired of this sensation. Sitting by the table next to her, Captain Toshiro Hitsugaya still looked uncomfortable with his massive erection as they shared a drink outside her apartment. She had to admit she was impressed by the young captain’s size, impressed and more than a little jealous Momo had something like it all to herself.

“Yes,” she said, “Plans for this started with Captain Yamamoto actually. Though faking my death was never really a part of it. Originally I was going to wait for Isane to master her Bankai before quietly retiring after seeding my position to her. Then the mess with the Quincy happened, and I needed to properly pass the title of Kenpachi over to Zaraki. Isane found me after the fight, I was very near dead,” she explained, gesturing to a faded but still visible scar between her breasts, “And we used that chance to fake my death after everything was settled with Yhwach.”

“Why fake your death though, instead of letting everyone know you were being decommissioned?” Toshiro asked. “I’ve never been to the ceremony for that, but I heard the parties afterward can be quite fun.”

Retsu smiled at him, “They are, but that wasn’t an option. If Kenpachi knew I was still alive…”

“Exactly, so we went with the best option.” Retsu told him, “Shunsui knows where to find me in case of an emergency.”

“I gotta say, you picked a very interesting place to retire to.” Toshiro told her.

“Thank you, I really rather like it here.” she said with a smile. “It was nice to find a place where I could indulge myself again.”

“Huh?” said Toshiro with a blink.

Retsu got up from her lounger and stretched her body languidly, making sure to show off her heavy tits and the way they bounced with her movements. “As a Captain, I needed to maintain a certain air about me, so I kept my carnal desires under a tight lock and key. But now, that’s no longer an issue.” she confessed as she moved over to where he sat.

“Speaking as a doctor, I know that can’t be comfortable or healthy after this long, let me help you with that.” she told him.

Retsu let her spiritual pressure rise to an intimidating level as she smiled sweetly at him. “Captain Hitsugaya, stand up.” she ordered him.

Toshiro got to his feet and Retsu got down on her knees, licking her lips at the sight of his huge dick still standing fully erect even after they’d been chatting for about an hour while Momo and Isane were out exploring the rest of the resort. Kiyone was here as well, from what he’d told her.

“Mmmmmmh, ahhhhhmmmmmmph!” Restu moaned as she wrapped her heavy breasts around Toshiro’s surprisingly large dick and quickly took the top ten inches down her skilled throat! She didn’t gag even in the slightest, sucking large dicks being nothing new to her as she moaned around his length. How she loved the feel of a big, hard, cock moving in and out of her mouth! Retsu could feel her pussy overflowing already as she moved her head back and forth slowly, her lips making lewd wet slurping noises every time she pulled back. The dark haired woman made sure to drag her lips along Toshiro’s dick as she moved, loving the way his body shivered under her attentions.

“Ohhhoo…” Toshiro groaned as Retsu slowly took his cock deeper, letting her breasts fall away from his thick cock as she took it all the way into her mouth!

‘Mmmmmmmmh, how long has it been since I had a dick this good!?’ Retsu thought as she began moving her head back and forth faster, feeling her pussy dripping down her thighs constantly. She loved the way his cock throbbed in her mouth, the feel of her throat bulging from his thickness moving through it, and the ache in her jaw as she kept the white haired youth’s cock locked firmly between her lips!

“MMMPH SLURRRRP, MMMPH, SLURRRP, MMMMMPH!” Retsu moaned around his cock, sucking hard on his length every time he pulled her head back, her lips making deliciously lewd noises each time she pulled her head back. She then pulled her head away fully, long glistening ropes of saliva trailing away from her mouth. “AHHHAAAA…” she moaned like a whore as she slowly licked her way up the underside of Toshiro’s cock from the base to the tip.

“Mmmmmh, I love big dicks like this…” she purred as she nuzzled her face against his cock like a cat in heat. She then took it back into her mouth, moaning in sheer pleasure as she felt her throat stretching around his girth again. “MMMMMMMPH!” she moaned as she felt her pussy gushing as she came just from the feel of his cock in her mouth alone!

“Ohhh fuuuuck…” Toshiro groaned as Retsu continued bobbing her head back and forth, moving her head faster now. Long tendrils of her saliva hung off her lips and chin and dripped off his balls as she moved.

“UUUGUUUGH…” she moaned as she lifted her head away. “Ahhhh, yessss, that’s what I wanted…” she moaned as she ran her tongue along the side of his cock slowly. She then blinked her gray blue eyes as she noticed that he was still hard! “Oh my, now this IS impressive.” she said as she pushed him back onto the lounging chair and slowly climbed on top of him, making sure to drag her naked breasts over every inch of his bare skin that she could.

“Most of the men here are one shot and done, I’m so glad you’re not one of them.” she said to him.

“I… Uhhh, hahhhh…!” Toshiro began, but his words became a groan as she slid her pussy down onto his cock, impaling herself on him.

Beneath her, Toshiro groaned in pleasure as Retsu began rolling her hips in slow circles. She loved the feel of the white haired youth’s fat dick stirring around inside her! More than that, she loved the SIGHT of it spreading her pussy wide while stretching up her abdomen. She clawed at her own breasts, gripping and squeezing them tightly. The dark haired woman then pulled one fat tit to her own mouth, suckling her nipple roughly and moaning from deep in her throat!

“Hmmmmh, you don’t need to hold back you know.” Retsu breathed into his ear as she leaned her body down close, her heavy breasts pressing against his chest warmly. “This is a place where no one frowns on your desires.”

“Ahhaaah…” Toshiro groaned as he reached his hands up, Retsu grabbed his wrists and placed his palms against her breasts. She moaned as he squeezed them reflexively at first, then on purpose as she felt his hips thrusting against her own.

“Mmmmmhhh…. Yes, just like that…” Retsu moaned, “AHHHHH, HARDER…” she screamed in pleasure as she bounced up and down on top of him. “OHHH FUUUUCK, YES, YES YES YES!!!! I LOVE THIS FEELING!!!! FUCK MEEE, FUCK FUCK FUUUUUUCK!!!”

“You, sound like… A whore…” Toshiro groaned, his hands gripping her breasts tightly, his fingers sinking deep into the soft mounds as he continued pounding his cock up into her.

“Fucking… Sluuuut!!!” Toshiro groaned as he began slamming his hips up and down, Retsu could feel her ass rippling with the force of his motions as she held onto his shoulders to keep herself from being flung off of him.

She then fell forward on top of him, panting hard for every breath as she felt her heart racing in a most delicious way. Toshiro let out a slow breath beneath her, “Pffffft…”

Retsu giggled at the sound, Toshiro inadvertently motorboating her breasts as his head was currently buried between them. She could feel his lips against the dark scar between her big tits as he exhaled.

“There, now was that so hard?” she asked him with a smile as she sat up again, moaning softly as she felt his cock still inside her.

“T… TOSHIRO!!!!” squealed a voice from their right.

Retsu turned her head and smiled at the sight of Momo and Isane standing a few feet away. Both were naked, and Momo had a look of utter shock on her face while Isane was blushing a deep red as she had both her hands between her legs as clear juices ran down her thighs.

Again, if I get a pic for it. Just a big dick with dark pubes should be of use, or a small one so I can make of joke of Uryu’s attitude.

Sometimes you need a Care Package from HQ to keep you going ya know?

Well you know what they say, big things* come in small packages**

*Toshiro is the big thing
**Unohana is the “small” package