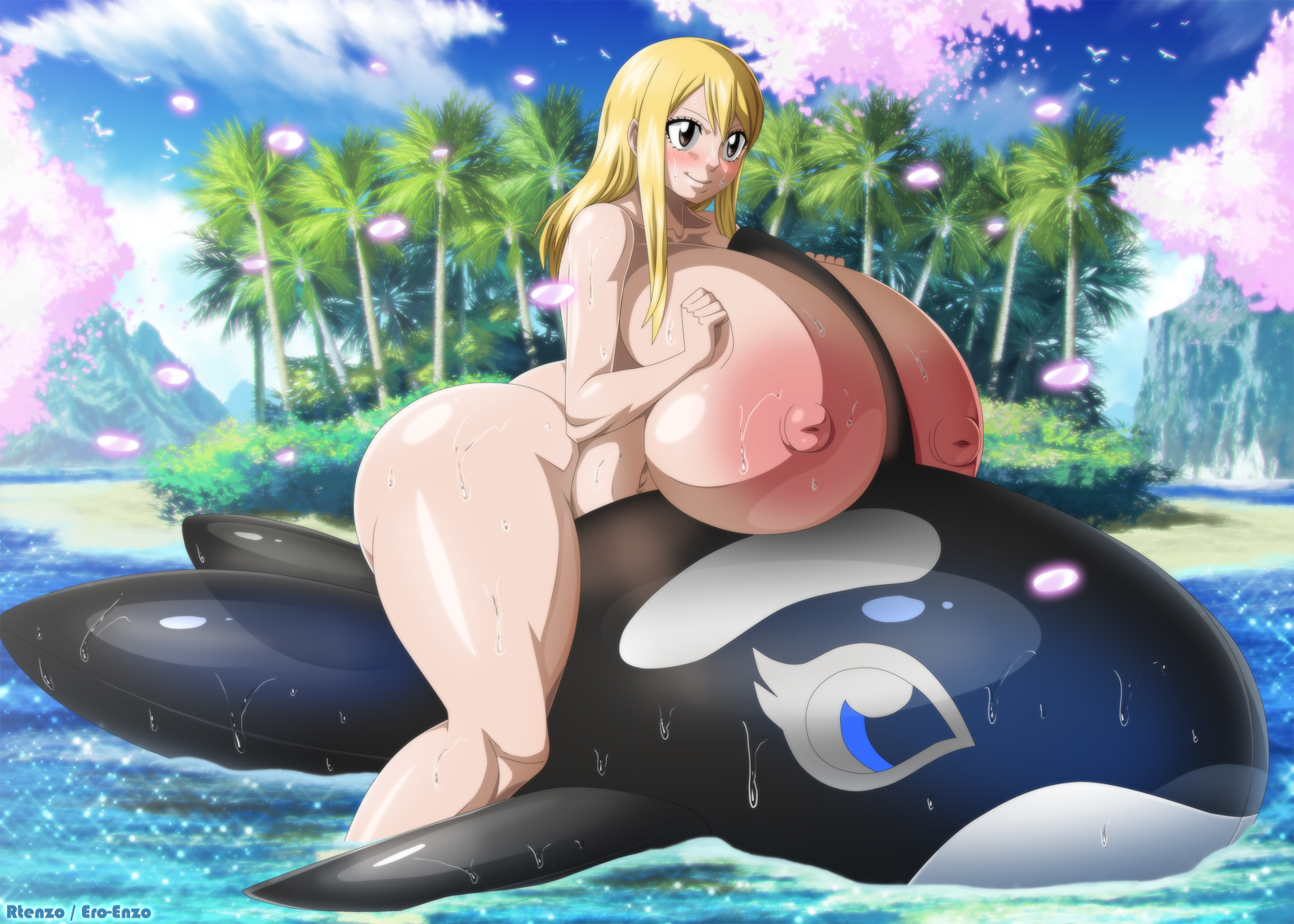 Lucy kept up her smile as she floated around the small collections of islands, stark naked and her tits on full display. The inflatable whale she was riding made it easy to show them off; all she had to do was put the fin between her boobs, and ta da! Instant sexy display.

The people on the beach loved it, cheering and catcalling her. Lucy was getting better when it came to putting herself on public display like this, but she still had a bright blush on her face.

As for why she was doing this…

“HAHAHA! You see that fat assed, big titty bimbo out there on the water?! She’s my date! Isn’t she sexy as fuck?!”

It was her first client, back again and just as fat, ugly, and rich as ever. Where he got his money, Lucy had no idea, but he seemed to have plenty of it and loved to spend it. The whole beach party was being paid for by him, complete with food and drinks, and he had wanted her to show off her body for everyone.

“Hey, slut! Get back onto the beach! Time for some more fucking!”

Feeling her eye twitch at yet another demeaning nickname, Lucy adjusted her course, kicking her ways towards the beach where her client waited. She made sure to strut and wiggle her way towards, swinging her hips exaggeratedly and putting an extra bounce in her step to make her breasts jiggle. “Yes?~” she cooed, pressing her body against his fat belly.

With a wide grin, he wrapped an arm around her, his large hand resting on her ass and giving it a hard squeeze, making Lucy squeak. Bending his head, he gave her a slobbery kiss, his wide lips covering her mouth as his tongue pushed inside it.

After a few long moments, he stopped kissing her, though he kept his arm around her, clearly enjoying the feel of her body against his. “Am I lucky son of a bitch or what?!” he shouted, his hand sliding up Lucy’s body to grope her boobs.

“EEK!” Lucy squealed, more to play to the cheering crowd than any real surprise.

“So what kind of fucking do you perverts want to see first?” her client yelled.

He roared with laughter. “Damn, babe! They want to keep you busy! What do you want to do first?”

Lucy made a show of biting her lip and thinking it over, before smiling up at him. “Why don’t you fuck my huge ass first this time?” Slipping away from him, Lucy turned, spread her legs, and bent as far over as she could, her tits almost touching the sand. Craning her neck, she looked back at him and winked, wiggling her butt in the air invitingly.

“HELL YES!” he shouted, lumbering forward at impressive speed for someone of his size and weight. His sausage-like fingers grabbed hold of her hips and ass and pulled her back; Lucy didn’t have to pretend when she yelled in pleasure as his cock was slammed into her ass. “I CAN’T GET ENOUGH OF FUCKING YOUR BUBBLE BUTT!”

“LOOK AT THOSE CHEEKS RIPPLE!”

“DAMN, HER TITS ARE GOING CRAZY!”

Lucy squealed and panted as he slammed his hips into her ass, driving his dick deep into her asshole. Her boobs swung wildly back and forth, her nipples getting harder with each passing second. “IS THAT ALL YOU’VE GOT, YOU FAT BASTARD?!”

“HA! Not even close!” he declared, sweat already dripping down his body. Tightening his grip on her hip, his thrusts gained even more power, rocking his body up onto his tiptoes and slamming his balls against Lucy’s pussy.

“THAT’S MORE LIKE IT! EEE!” Lucy shrieked when he spanked her left ass cheek.

“YOU LOVE GETTING YOUR WHORE ASS FUCKED AND SPANKED, DON’T YOU?!”

WHAP! Another spank on her other cheek, and Lucy could feel her pussy start to drip its arousal down her thighs.

“FUCK YEAH! GIVE IT TO ME AS HARD AS YOU CAN!” she screamed back, rocking her body in time with his thrusts.

His body was like a blur as he fucked Lucy in the ass as fast and as hard as he could, spurred on by her reactions and the acclaim of the beach going crowd. Lucy was panting and sweating by this point as well, making her body shine under the hot sun.

Breathing, he slowly pulled his cock out of Lucy’s ass…only to grin widely before slamming it up her dripping wet pussy! “SURPRISE, YOU SLUT!”

“Sure thing, whore! Hey, anyone want their pussy ate out or their cock sucked?” he yelled out to the crowd.

A few seconds later, Lucy looked back at him over her shoulder, a deadpan look on her face despite being fucked. “Didn’t quite think that through, did you?” she drawled.

Her client never missed a beat in fucking her tight, wet pussy, even as a sweatdrop hung off his head. “Yeah, not my smartest move,” he admitted, watching the crowd wrestle and fight for the privilege of being the first one Lucy pleasured.

like how lucy is just 100% fine with her job now. client pays to fuck she fucks. client pays for a fun day outside naked or clothed she has fun. shes a full 100% embraced whore now. love how you can see the change in her from hating this guys guts to enjoying her job.

Another lucy picture huh and some public sex not bad! Love the background here it’s quite beautiful! Lucy looking sexy as fuck but I need to be honest too small, the story on the other hand was ok as again she was spending the day with her first client when fairy tail turned into a sex guild. It’s pretty good as Lucy’s performance was amazing in this! Unfortunately I can’t get excited over a jobber so 7.5/10

Eh their fine but I rather lucy with someone else.

Ah yes another fine image. You just can’t go wrong with a huge tittied and fat assed Lucy I say plus she’s a great combo of cute and sexy in this pic with the background and inflatable whale.

Is their anyway possible for natsu’s cock and balls to grow so he can be on par with shiki. Because without natsu their would be no shiki and without fairy tail their would be no Eden’s zero, natsu and fairy tail are OG’s that inspired their spiritual successors creation!

What??? How do you know his dick is bigger? I don’t think Shiki has had sex in this story yet

Um, Because you told me? So can you do the cock and ball growth because one(fairy tail, natsu) wouldn’t exist without the other(Eden’s zero, shiki). You gotta the give the OG dragon MC some love!

Oh, I must have forgotten. Nothing like that is planned yet. And it’s not a competition

“Yet” I like the sound of that and also i know it isn’t a competition I just want them to to be on par with each other and be equal in dick and balls size.

Um, because you told me? So can can go through with the cock and balls growth? Because one (Eden’s zero, shiki) wouldn’t exist without the other (fairy tail, natsu) and you gotta give the OG dragon MC the respect he deserves!

Well, here’s a guy certainly getting his money’s worth with Lucy! And I certainly love seeing Lucy at least getting repeatedly stuck with the “ugly bastard”.

P.S.
I forgot to mention this two chapters ago: I bet Wakaba is going to be spending a lot of money at the new guild now that Mira’s joined.

Lucy attracts all the FUBs, the most in the guild

Now this has to be the cutest image you ever dropped. And I don’t mean that as a joke. I’m completely honest when I say that no girl ever looked as sweet and cute, as Lucy does here, sitting on an inflatable (and just as cute) killer whale, with it’s fin separating her tits. Her expression is also full of confidence, while also being just so darn sweet. Amazing background, though the sakura trees on the side makes the water/ocean area seem rather small since they are so close to Lucy and because I doubt that they grew in the water nowadays xd. Quite exotic and nice to look at nonetheless. The water that dripples off of her body mixes really well with the cum version. I love the makeup version although it’s nothing special. But giving the cute inflatable whale some lipstick marks was just such a brilliant idea.

Lucy really grows to become a true slut. The way she deals with the ugly Bastard makes this pretty clear and I find their dynamic quite funny. I hope to see him more (maybe even in an artwork since I don’t really mind the “Ugly Bastard trope”). Pretty short sex scene but I like it and especially it’s beginning and ending. The crowd really represents me, if I were at that situation. I couldn’t, for the love of god, decide which way to fuck her first xd. And the ending was pure comedy gold, with the crowd battling it out to see, who gets to experience Lucy’s tongue first.

Honestly, this whole package has everything I ever could wish for: an amazing Pin Up which looks dynamic and sexy, a cute inflatable whale, a funny and hot story and of course one of the biggest sluts in your casts (be it just Fairy Tail or everything else considered). Have I mentioned how much I like the whale?
9/10

Wouldn’t be so sure about the ranking (I ranked the One Piece cafè setting/story line and a few others the same or more) but still, thanks for appreciating my support.
As for the ugly bastard: I at least think that it creates a funny atmosphere and that the girls in your stories with them seem even more sluttier and degraded. And hey, ugly bastards need love too xd.

Today has been full of pranks so it’s good to know there’s still someone out there who’s not joking around. Thanks for the art and story!

I would have liked it more, if Lucy had been fucked on the whale.
But again fantastic work on the pic.

YES!!!! Our favorite blonde bimbo is back and looking sexier than ever with those thicc thighs and huge boobs 🔥🔥🔥🔥 good story to go along with a good picture. Will we ever see Brandish or Cana in this story?