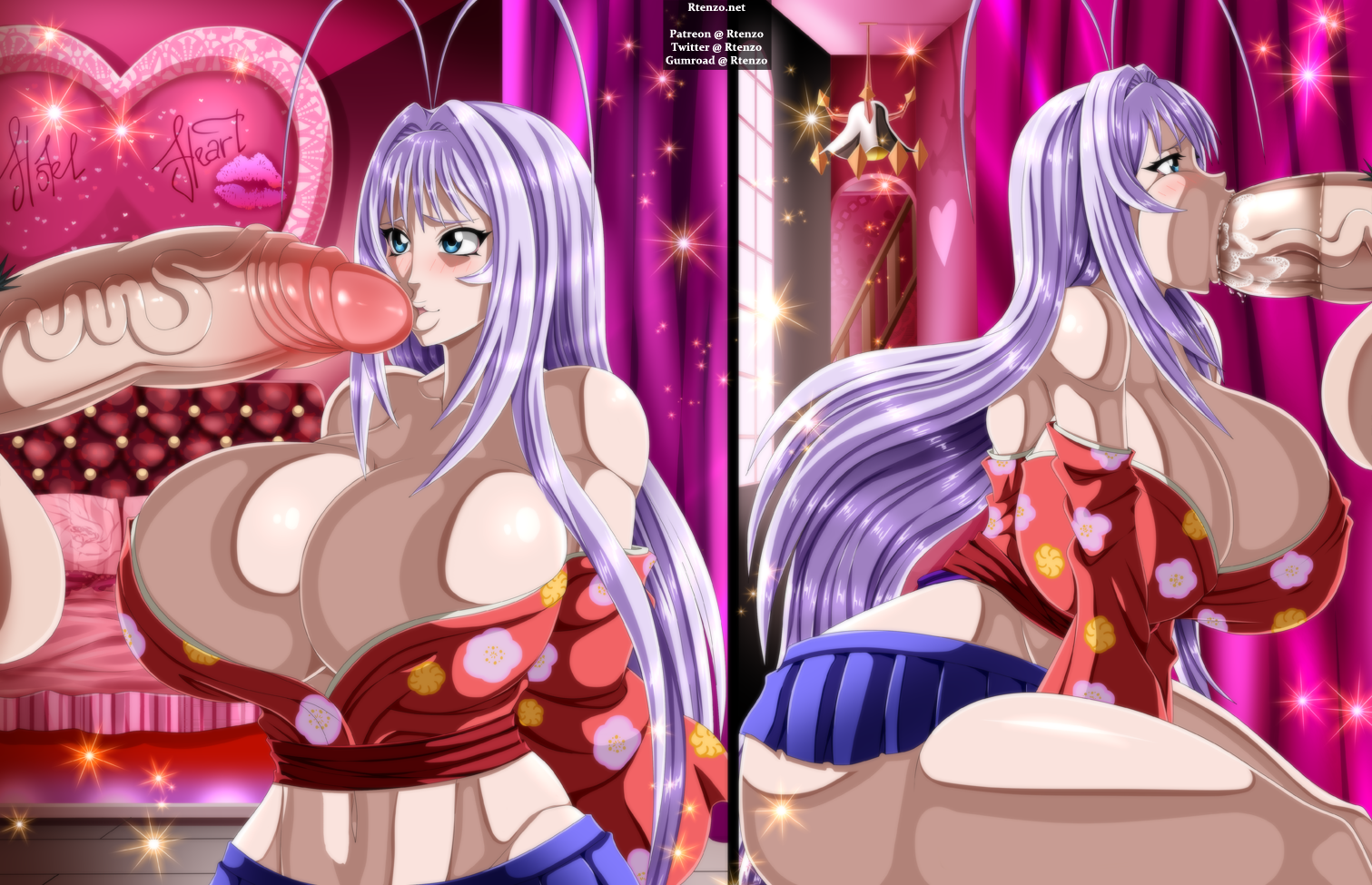 Masataka eyed the hotel door, comparing it to the address texted to him by Maya. The room numbers matched, but why was Maya asking to meet him in a hotel? After a moment, he shrugged; there was an easy way to find out, after all. Knocking on the door, he waited until he heard, “Come in!” before opening the door.

And he stopped just past the threshold, eyes widening and barely registering the door closing behind him. From the pink coloring of almost everything, to the heart themed decorations, it was clear that this room was themed around romance and sex. ‘Why would she…‘

Maya’s giggle broke Masataka out of his stunned thoughts. Blinking as he looked at her, Masataka felt a blush steal across his face. He wasn’t unaware of how attractive Maya was, of course, but given how much time she spent in her child form, it was easy to forget how incredibly sexy and beautiful she was in her true form.

Not so much this time; lounging on the bed, the silver-haired woman had every single one of her curves on display, her modesty barely concealed by her usual open shirt and short skirt. Maya also had a smirk on her face, adding to her beauty. “You look surprised, Masataka,” she teased.

Shaking his head briskly to clear some of his confusion, the black-haired young man cleared his throat. “That’s because I am. Maya, why are we meeting in a room like this?”

Maya opened her mouth, a teasing expression on her face…before slowly closing it, her mirth slowly draining away, leaving her looking somber and tired. With a soft sigh, she slipped off the bed and padded closer to Masataka.

“I was going to tease you some more,” Maya admitted, running a hand through her long hair, “but I guess this really isn’t the time. Instead, I’m going to be honest with you.”

Weary blue eyes met wary yellow eyes. “Masataka, we’ve both been chasing after and pining over different people for a long time now. You with Aya, and me with Mitsuomi. And you know what? I’m tired of it,” she admitted bluntly. “So I thought…”

Stepping even closer, she laid a delicate yet strong hand on Masataka’s chest. “Why don’t we both look closer to home, so to speak?”

Masataka’s eyes widened considerably, and his jaw opened and closed a few times without making any noise.

Maya shrugged, which resulted in some very interesting bounces to her breasts. “And maybe we’ll both decide this was a mistake and we’ll never do it again. Or maybe…” The heated look she sent him had Masataka’s cock abruptly harden. “Maybe something more will develop from this. So…what do you say?”

Maya did her best to sound nonchalant, but there was a shadow of vulnerability in her pretty eyes, as she waited for him to make the next move.

Taking a single step forward, Masataka pulled Maya into his arms and kissed her, his libido heating up as her breasts pressed against his chest.

Maya froze in surprise for just a moment, then she was kissing him back with a soft moan of need that made his dick rock hard in an instant. She pressed herself closer against his body, and Masataka was more aware than ever of how sexy she was.

How long the kiss lasted, Masataka wasn’t sure; it could have been seconds or an hour for all he knew. But when it ended, Maya immediately dropped to her knees and almost ripped his pants to pieces in the process of pulling them down. She then paused, a blush spreading across her cheeks, when she saw the size and length of it. “Wow…” she whispered, scooting closer until her lips were brushing the head of it.

Masataka groaned; even the light touch of her lips felt amazing. And when Maya opened her mouth and began to slowly suck on his cock, the young man was pretty sure he was in heaven. “Oh god…Maya…” he moaned.

The room filled with the sounds of Maya slurping and sucking on Masataka’s dick. Her jaw spread wider and wider; her cheeks ballooned outwards as she continued to push her head forward, taking more and more of the erection into her mouth and down her throat. Her right hand stole down between her legs and began to rub her pussy as she moaned with pleasure.

She squealed when Masataka tackled her backwards onto the bed, his face buried between her boobs as he kissed, licked, and sucked on them. Her squeal got louder when his dick plunged into her pussy; she arched her back, pushing her breasts harder against his face as she wrapped her legs around his torso, pulling him in even deeper. “Ahh! Yes, Masataka! Fuck me! It feels so gooooood!”

They never left the hotel room the rest of the day, or the following night. As for what would happen in the days to come…well, neither of them were sure about that, but both would admit, with smiles on their faces, that they definitely didn’t regret the change in their relationship.

Everyone what a one-shot of history’s strongest disciple kenichi and if it’s just going to be a one-shot you should go all out and do the unexpected, so instead of doing a pairing of kenichi and miu, kenichi and shigure, or a kenichi and renka do a one-shot no one would see coming, a one and down chapter of kenichi and the older but extremely sexy bewitching fist Mikumo Kushinada fucking the day lights out of each other!

I mean think about, their martial artists who have learned secrets about the human body just imagine the possibilities.

Oddly enough, I never got into Tenjou Tenge, but I did through all of the guy’s other series Air Gear. 😂… Still great by the way 😅

Now this came out of nowhere! I wouldn’t have expected a Tenjou Tenge one shot on here. Let alone a Maya Natsume picture.

Still, it’s a breath of fresh air. And on that note, Masataka really got lucky here too. XD

Well, this was a nice surprise. Well done. 😀

Thanks Hiryu, expect more surprises in the future! 👍

Wasn’t expecting it… but I liked it. And I’d be open to more.

lol Happy you like it Spectral and thanks for the feedback 👍

I haven’t thought about this manga/anime in years. Love the pic and I also thought this would turn out to be a dream. Really glad it was real.

Damn! Masataka gets lucky in more ways than one. I honestly expected this to end up being a dream for him. Loved the Maya art. You dont see Tenjo Tenge much or at all anymore.

Yeah, Some animes get forgotten over time. I’ve only ever seen the anime, I think the manga gets really weird