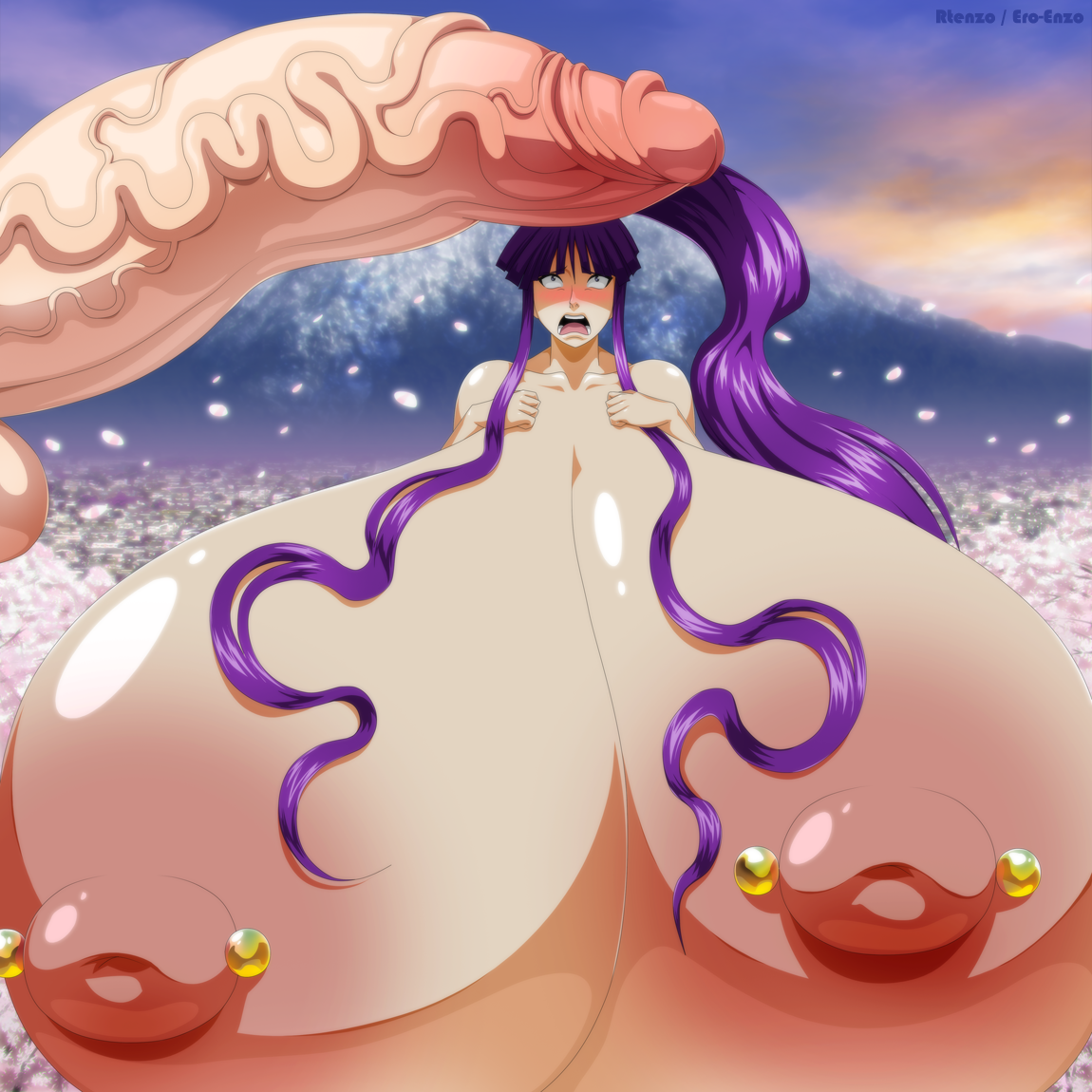 “…” Densuke gaped, eyes bugged and his jaw scraped the ground. Kirika smirked and preened at his reaction; her monster sized tits jiggled and wobbled with even the slightest movement, and Densuke honestly had no idea how she was able to stay standing.

“I finally have your attention all to myself!” Kirkia proclaimed happily, her smirk widening. “I bet you’re wondering how this happened. Well, don’t worry about it! All you have to know is these babies,” she slapped her ginormous tits for emphasis, flushing with pleasure, “..are one hundred percent real! So…do you feel inspired, Densuke?~”

“Um, not the reaction I was expecting,” Kirika said slowly, tilting her head to one side. “What’s so funny?”

Densuke’s pants suddenly exploded from his body, making Kirika flinch. When she opened her eyes, it was her turn for her jaw to drop as she stared upwards, her face shadowed by Densuke’s mind-boggling enormous dick!

“You’re not the only one who improved,” Densuke said proudly. “And now, after all that teasing and flirting, you’re finally going to get the cock you always wanted! Open wide!”

Grabbing her and spinning her to face him, Densuke slammed his massive pole in between her enormous boobs and thrust his hips forward. Kiriki, her mouth open to say something, gagged and sputtered as the head of his dick was forced into her mouth. Her jaw stretched wider, and wider, and then wider still as more and more of Densuke’s cockzilla was pushed down her throat.

“YOU LIKE THAT, SLUT?! YOU LIKE GETTING YOUR HUGE FUCKING TITS AND YOUR SMART MOUTH POUNDED BY MY DICK!?” Densuke yelled, grabbing hold of Kirika’s pierced nipples and twisting them. Her muffled squeal vibrated down the length of his cock, making him even harder. “WELL, GUESS WHAT?! I’M JUST GETTING STARTED!”

Pulling out his cock, Densuke didn’t even wait for Kirika to stop coughing; he spun her around again and, without giving her a chance to realize what was happening, slammed his rock hard cock into her hot, wet pussy!

“AAAAAIIIIIIEEEEEE!” she squealed as her pussy was filled to its limit and beyond. “IT’S TOO BIIIIIIG! BUT IT FEELS SO GOOOOOOOD!!!”

“THAT’S RIGHT, WHORE! NOW MOVE THOSE HIPS! FUCK ME BACK LIKE I KNOW YOU WANT TO!” Densuke ordered, spanking her equally huge ass and making her squeal again.

Kirika thrust back with all her strength; her monstrous breasts swung wildly, forcing her to move her head to avoid being smacked with them. Densuke’s huge balls slammed into her stomach with thrust as her pussy rapidly began dripping and getting hotter and hotter.

With a mighty roar, Densuke sped up his thrusts, his hips a blur as he pounded Kirika’s tight pussy with all the energy his body could give him. He grinned when she screamed her lungs out with pleasure, her orgasm causing her pussy to tighten even more on his cock, pushing him over the edge.

“We’re not finished yet, bitch,” he hissed, pulling his still hard dick out of her pussy…and starting to push it into her unsuspecting ass!

“That’s right, I am! And we’ll find out how much you can take together!” Densuke declared, pulling back his hips yet again…

(Meanwhile, Back in the real world)

“What do you think he’s dreaming about?” Chiharu asked innocently, tilting her head to one side as she watched Densuke smile in his sleep and mumble something.

“Hmm…probably something perverted,” Kirika said authoritatively, licking her lips at the look on Densuke’s face and rubbing her thighs together. She turned hungry eyes on Chiharu. “What do you say we give him a show when he wakes up?~”

the fic said that Kirika have a equally huge ass. Will we see pics of Kirika as monster thicc as Isane some day?

Probably not, most of my Kirika pic commissions are tit focused

Well. Are even other girls comissioned to be monster thicc like Isane? If yes, then. Like who?

No one that I can think of off the top of my head… maybe Kaguya from Naruto?

Bamboozled by the dream ending yet again !
But what a fantastic dream it was, can’t wait to see more Eiken stuff like this.

Unless he acts that way in the manga? i dunno

Amusingly enough…kinda. He pervs out all he likes in his head, but in reality the man is very big on the concept of consent. The one time he went nuts on Chiharu because a layered dream left him thinking he was STILL dreaming when he woke up, poor kid was feeling pretty guilty when he realized he was awake.

Astounding artwork rtenzo, I like the shocked expression that Kirika is giving as an almighty cock looms overs her head above. Also, her gargantuan sized boobs with nipple piercings were amazing as well.
On the story part, it’s was a great read, Densuke dominating Kirika was incredible, even though it was all a dream again. 😑
Never the less, a great story wished it was longer. 😁👍

Thank you Nameless! I’m happy that you enjoyed the various elements of the pics including the story