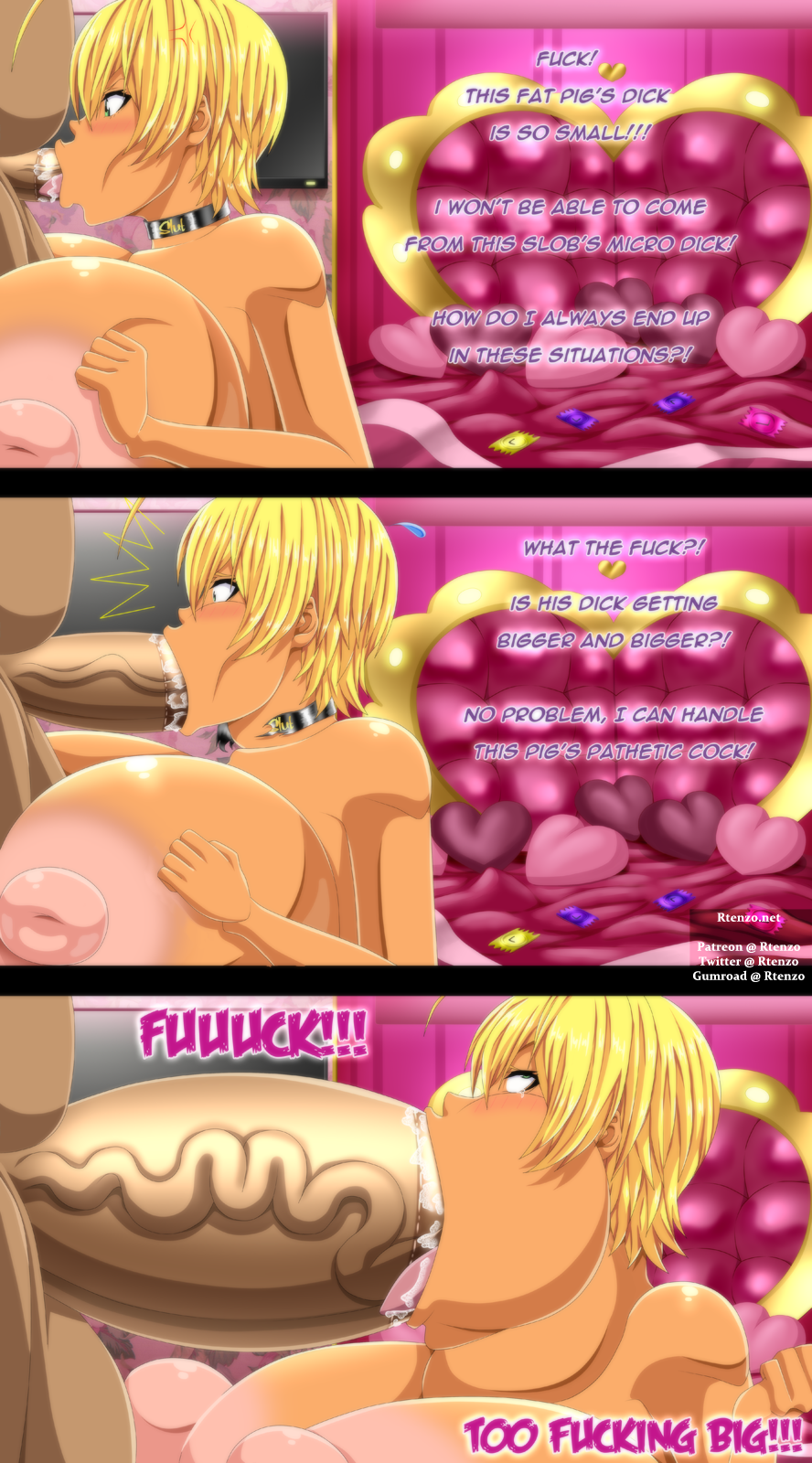 ‘Fuck!‘ Ikumi swore to herself, staring at the pathetically small cock of her partner. ‘This fat pig’s cock is so small!!! I won’t be able to come from this slob’s micro dick! How do I always end up in these situations?!‘

Oh yeah, because she got too impatient. Several of the men in her dorm were more than capable of satisfying her, but they were all so busy! Cooking, classes, hunting for ingredients: it was hard for Ikumi to corner any of them for a quickie, let alone a proper fucking.

Then something strange happened; it started slow, so slow that Ikumi almost thought she was imagining it. But after several seconds, it was obvious.

‘What the fuck?!‘ She thought in shock, opening her eyes wide. ‘Is his dick getting bigger and bigger?!‘ Sure enough, her eyes didn’t lie, and neither did her mouth: she could feel her mouth and jaw stretching.

Ikumi’s eyes snapped up to her partner’s; he was looking down at her with a smug look, as if he knew what she was thinking. Narrowing her eyes in determination, Ikumi deliberately shook her head. Hefting her tits, she began rubbing them against his balls as she sucked and licked harder.

‘No problem; I can handle this pig’s pathetic cock!‘ She told herself. ‘And if it actually gets to a decent size, maybe he’ll actually be able to make me come too!‘

And it just. Kept. Going.

‘FUUUCK!!!‘ Ikumi thought frantically, her eyes rolling up into her head as her jaws and cheeks were stretched to their utmost limits. Her hands fluttered helplessly as she gurgled, her tongue pinned outside her mouth and drool bubbling around her lips. ‘TOO FUCKING BIG!!!‘

“You like that, slut?!” the man asked with a chuckle, reaching down to grab Ikumi’s thick nipples; his strong fingers twisted them, causing her to let out a very muffled squeal. “My dick might not look very impressive at first, but as you can see…”

Ikumi gasped and spluttered as he put a hand on her head and began pumping his cock back and forth. Her tits bounced and wobbled, not even touching his body as he face fucked her.

“It gets much better and bigger as time goes on,” he finished happily, moaning lightly as Ikumi’s throat and lips squeezed his erection. She was smoking hot, and at least she hadn’t been one to outright laugh at him. That put her above several other ladies he had fucked into submission, so he wouldn’t hold too much against her.

“MRPH! RGH! OHMPH!” Ikumi grunted, frantically doing her best to lick and suck, even as he pounded his dick down her throat. It was getting harder to breath, and she thought she might pass out, but then-

The busty blonde gasped for air when his cock finally pulled out, letting her jaws and mouth snap back into a more normal position. She coughed and sputtered a few times, trying to get her breathing and heart rate back to normal.

“So…do you want to keep going?” he asked, some resignation in his voice. A lot of ladies had stormed out when they came to this point, furious at him for ‘tricking‘ them. He wouldn’t be surprised if-

He arched his eyebrows in surprise when Ikumi finally lifted her head…showing a wide, beaming grin and a hungry look in her bright green eyes.

“You’re out of your fucking mind if you think I’m leaving just when things are getting really good!” she told him excitedly, staggering to her feet and tugging him towards the bed. “Holy shit, that was amazing! I hope you have endurance to match your size, because I’m going to fuck you all night long!”

He blinked and then chuckled, feeling a matching hunger to her own. “Oh, believe me: I’m more than up to it!”

I´m glad to see more of Shokugeki no Soma, especially in Alice Nakiri´s birthday. Nice short story hope there is more down the road. Ikumi received a nice surprise and she had a new partner for the day

Thanks for commenting Shadowdragon! I’m happy you enjoyed the story! 👌

Wooo, I’m happy seeing my request on here. I was surprised you went with a random guy for the idea when I sent it to you but I think it still came out well.

I’m glad story wise that it didn’t turn into some sort of mistreatment from the guy. Plus I’m also sure he’ll soon realize that she’s probably far too much for him to actually handle hahaha.

Really innovative spin on this kind of artwork. Since this isn’t exactly a new concept, it is always nice to see you mix it up. I love the three very distinct and different expressions on Ikumi’s beautiful face and how she quickly comes to the realization, that there is more than meets the eye, when it comes to the strangers cock. It looks like that her nipples also became much bigger and without doubt harder, the bigger her partner became, which shows that she greatly enjoys sucking monster cocks. Always great to see some choker snapping and the background looks nice as well. In my opinion, the lipstick marks are not the greatest. Cyan fits her quite nice but I think that the marks are just too small and too many at the same time. Maybe make them slightly bigger next time and not so many (that’s my opinion at least, maybe others see it differently). I love that the text changes in the cum version and it really fits the scene. The ammount of spunk is just right for a connoiseur of fine tastes and the “tidal wave” of cum, spurting out of her stuffed mouth looks really great.

Not much can be said about the story. It is nice from start to finish. Ikumi is simply nice to read and watch getting fucked.

My oh my did this catch me by surprise! Short and pretty hot as I’m not the biggest fan of random guys but seeing more ikumi is always amazing! I love the art love seeing how she takes him easy and then gets harder and harder as he grows its really hot, I think a nice touch is her choker got snapped off which I find hot! The story wasn’t too thrilling but had some great dialog with meat meat foul mouth at start before being closed shut! Also he isn’t bigger than soma which is good im not a fan of random characters being bigger than main cast characters. Overall very nice
8/10

Yep, she did not think it was gonna become so big but looks can be deceiving lol 😈