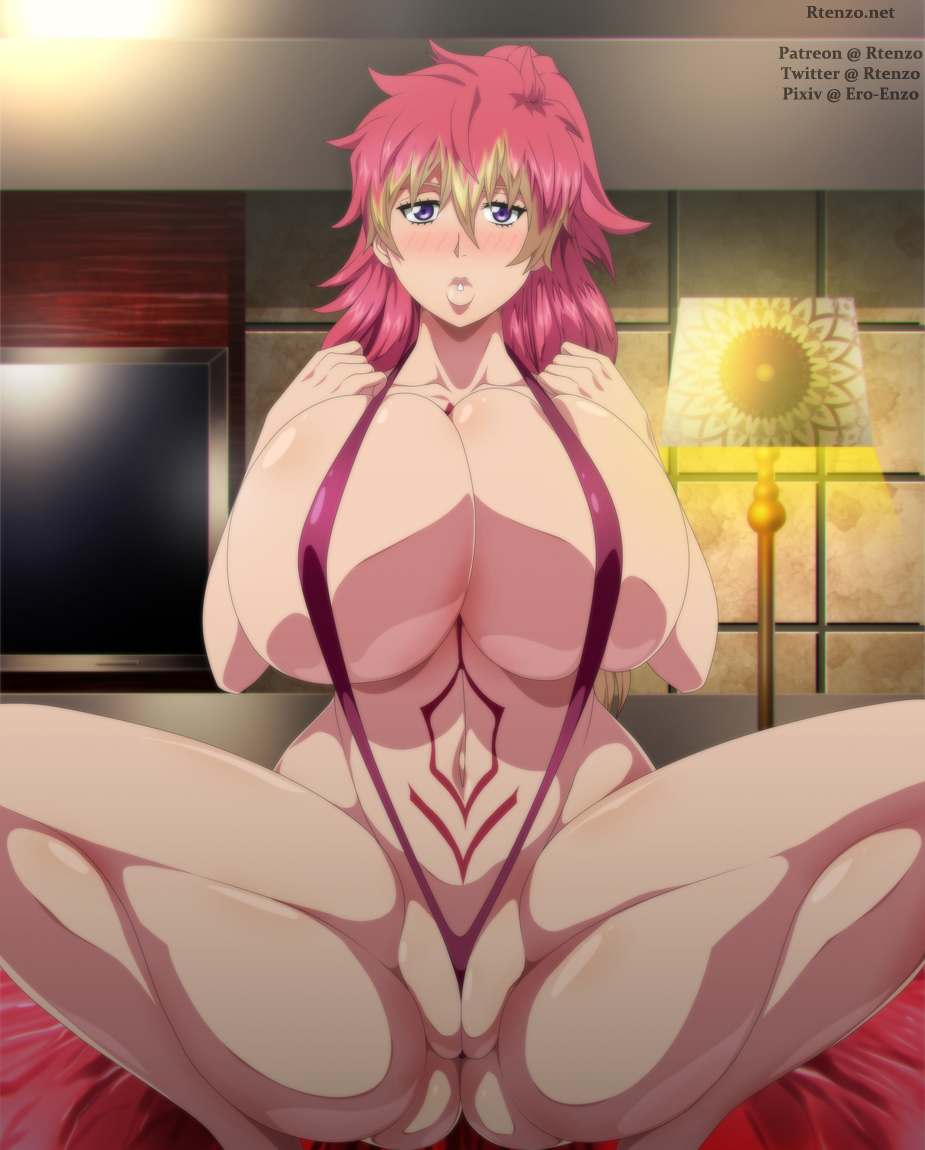 As the demon with powers over time and space, Mephisto was seldom surprised. Or at least, he could have set it up so that was the case.

But where was the fun in that?

He had come to the human world and helped them out because of their unpredictably and potential. Knowing too much would have spoiled the experience, so he avoided using his powers whenever possible.

So, when he came back to his bedroom, humming a new song he’d heard on the radio, and found Shura squatting on his bed, wearing nothing but a bikini that could generously be described as a pair of thin straps, he stopped in his tracks. He did at least have the presence of mind to close the door behind him, but mostly, Mephisto was preoccupied with staring.

Shura blushed harder with each passing moment, wriggling slightly in place as she waited. The motion, small as it, almost exposed her nipples and her pussy. Just walking here had been hard enough without being seen, let alone constantly exposing herself.

…all right, fine: she normally didn’t mind showing off her body, but there was difference between being teasing and showing off everything. Particularly when it came to people she actually had feelings for.

Mephisto broke silence by chuckling. “Ah, this world never ceases to entertain me,” he announced, already starting to remove his clothes.

“…really? You’re just going to accept that I’m here like this, just like that?” Shura asked skeptically, feeling a little disappointed. She had been hoping to fluster Mephisto a little bit, maybe even get him to blush. Just rolling with it wasn’t nearly as much fun-

Her train of thought was neatly derailed when she saw Mephisto’s cock. Already hard and erect, it looked like it was pointed straight at her, making her mouth water and her pussy pulse with sudden, urgent need.

“Pretty much, yeah,” Mephisto answered nonchalantly, though from the look on Shura’s face, he wasn’t sure she actually heard what he was saying. “Unless I’m reading this situation very wrong, in which case, I can leave…”

He was just teasing, of course, and part of Shura knew what he was doing. That didn’t stop her from growling with need and launching herself across the room, smashing her lips and chest against his.

Mephisto was barely rocked, bringing his arms up to wrap around Shura even as he kissed her thoroughly back. Grabbing onto her ass, he fondled it shamelessly, making her moan into his mouth as she writhed against him. His dick rubbed against her pussy for a moment before he pulled his hip back just enough before thrusting forward.

Shura screamed into the kiss when Mephisto plowed into her. Then she was spinning in his arms as he turned. She was slammed into the wall, though not hard enough to knock her breath out or hurt her. He was being oddly gentle, though it was probably just so he could continue fucking her.

No complaints from her.

Now that the wall was supporting Shura as well, Mephisto was able to move one of his hands off her ass and up to her tits, grabbing one and squeezing hard. She threw her head back with a gasp, breaking the kiss and giving him the opportunity to suck on her other breast. He grinned, feeling her nipple harden under his teeth and tongue.

“HELL YES! I WANT IT! I NEED IT! FUCK MY ENTIRE BODY!” Shura howled, squeezing him with her legs and bouncing along with his thrusts, trying to get his cock even deeper into her pussy. It felt amazing, even better then she had hoped. Sweat appeared like magic on her body; she could feel it dripping off her face and ass.

“Don’t mind if I do!” Mephisto grunted, thrusting harder and faster with each passing minute. It had been a long time since he’d fucked anyone who could actually keep up with him; he had almost forgotten how damn good it felt.

Shrieking as she came, Shura whipped her hair around, clawing frantically at Mephisto’s back. “YESSSSS! DON’T STOP! DON’T YOU FUCKING DARE STOP!”

Well, it was a good thing she said that, because he couldn’t stop now if wanted to, and he certainly didn’t want to, at all. Shoving her against the wall, Mephisto buried his dick as far as it would go, yelling, “TAKE IT, YOU SEXY BITCH!” as he came

Shura’s scream was window shatteringly loud; luckily, Mephisto’s room was magically reinforced. Her clawing at his back became positively vicious, but he welcomed the pain; it made the mind-blowing pleasure even better.

“You didn’t come here for just one quickie, did you?” he asked rhetorically, pulling back enough to look Shura in the face.

The hunger in her purple eyes told Mephisto everything he needed to know, and he laughed. “Good. Because I wasn’t close to being done yet either.”

“Shut up and fuck me some more,” she growled, though she was smiling as she pulled him down for another kiss.