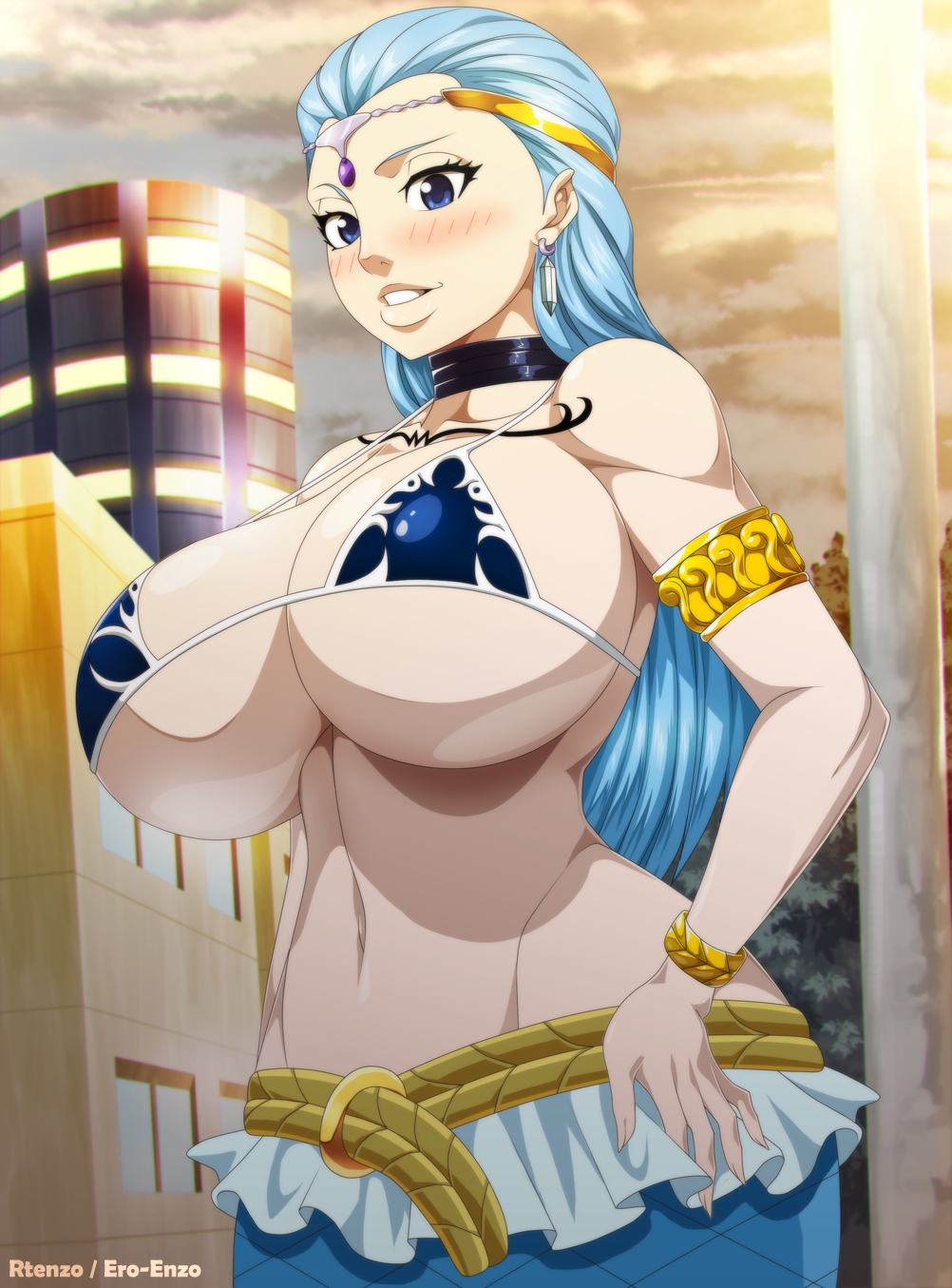 (Earlier in the month)

With Juvia and Natsu both leaving on a mission together, Lucy had been looking forward to some peace and quiet. No one breaking into her apartment without warning or dragging her off on crazy missions. No one accusing her of being a ‘love rival’ and glaring at her for hours.

Nope, just normal guild shenanigans, some peaceful missions, and time to herself to relax and maybe even work on her novel. It would be great!

She lasted less than a week before she cracked!!!

Traveling to the human world was always a pain, but at least this time her crybaby of an owner hadn’t pulled her away from a date with Scorpio or something equally important. In fact, Aquarius’ day was shaping up to be pretty boring.

So when she emerged from the bathtub full of water, she was only mildly annoyed, rather than seriously irritated. “All right Lucy, what do you need me for this time…?” Her voice trailed off when she got a good look at her summoner.

At first glance, the blonde appeared to be normal. More normal than usual, actually, since Aquarius almost always saw her in the midst of a fight of some kind. However, now they were simply in Lucy’s bathroom, with Lucy waiting for her.

A closer look revealed that Lucy was sweating and twitching slightly. There was a strange look in her eyes, one that Aquarius couldn’t ever remember seeing before. It made her a little nervous, if she was being honest; it was like the crybaby was hungry for something, and it definitely wasn’t food.

“The hell is wrong with you?” No point in beating around the bush, and Aquarius would admit, she was the tiniest bit concerned about Lucy.

…and now Aquarius was REALLY worried, not to mention stunned. She gaped at Lucy for a long moment before finally gathering her wits. “Again, the HELL is wrong with you?! Did you get hit by a spell or something? Why one earth do you want me to fuck you?!”

“And I was the first person you thought of?” the Celestial Spirit asked skeptically, folding her arms under her breasts.

Lucy blushed, looking away. “I got really desperate and grabbed my keys. Yours was the first one I got a good hold on.”

Aquarius snorted. “That certainly sounds like something you would do.” Ignoring the blonde’s pout, the mermaid gave her a pointed look. “And why should I do this? Ignoring the fact that I don’t like you,” she ignored the little voice in her head that laughed at that, “I’m sure you can find plenty of other people that would be happy to bang your brains out.”

“Yeah, but most other people don’t have the cock size Natsu has! plus you’re right here in front of me, and I really need it!” Lucy clasped her hands in front of her body, looking to be on the verge of falling to her knees. “Please! I’ll do anything!”

Slowly, Aquarius smirked. “Really? Anything? Well, now you have my interest.”

“So… you’ll really do it?” At Aquarius’ nod, Lucy squealed with happiness, making the spirit wince. “THANK YOU! What do you want in exchange?”

“Oh, we’ll discuss that after I’m done with you,” Aquarius purred. “For now, just get naked.”

The spirit would later swear that all she did was blink and Lucy’s clothes were on the floor, leaving the blonde naked. With her clothes out of the way, Lucy’s arousal was clear to see: her nipples were hard and sticking straight out, while her pussy was already dripping, juices running down her thighs.

“You really are hot and ready, aren’t you?” Aquarius’ lips curved into a smirk as she got her urn ready. “But luckily for you, I have the perfect toys for you.”

Aquarius giggled more than she should have at the sight of Lucy’s expression when a thick tendril of water shot into her mouth. The blonde’s surprise didn’t last long, as she became far more distracted by the second tendril that emerged and began rubbing her pussy. “MPH! MPH! MMPPHH!” she moaned, as loudly as she could around the water tentacle in her mouth.

“What’s that?” Aquarius asked sweetly. “Still not enough for you? What a slut you turned out to be! Still, as your loyal Celestial Spirit, I’ll do my best to satisfy you.~”

A veritable forest of water tendrils poured out, heading right for the wide-eyed blonde, who seemed torn between running away and welcoming them. And in a few seconds, it was a moot point; the tentacles surrounded her body. They squeezed and fondled her breasts, paying special attention to her nipples; they pulled and twisted them without mercy, stretching them without mercy, flooding Lucy’s breasts with pain and pleasure.

More squeezed in between Lucy’s thighs, pushing into her pussy, while others tweaked her clitoris, producing a muffled shriek. Aquarius made sure to push in as many water tendrils as the blonde’s pussy would take; she also kept flicking and playing with Lucy’s clitoris, sending her into a frenzy of orgasms, one after the other.

Her ass wasn’t exempt either; her round cheeks were rubbed and spanked, while still more water squirmed in between them, heading towards her asshole. Lucy did her best to glare at Aquarius for the spanks, but utterly failed to intimidate her smirking water spirit.

Caught in a storm of watery tentacles, all of which were focused on giving her as much pleasure as possible, Lucy flailed and wiggled. Sweat mingled with the water as she came yet again with a shriek, the sound vibrations traveling through the thick tendril jammed into her mouth. “MMMMMMPPPPHHHHH!”

Then a particularly thick rod of water finally pushed itself all the way into her ass. Eyes bugging out, Lucy screamed as the biggest orgasm yet tore its way through her body. “MMMMMMMMPPPPPPPPPPHHHHHHHHHHH!”

“That sounded like a big one,” Aquarius noted, smirking deviously as she set her urn down. “Well, I think I’ll go check out your library, see if you have any new books I can read while you’re having fun.”

“Don’t worry, I’ll be back in a few hours. That should be enough fun even for a slut like you; then we can discuss how you’ll repay me for such a wonderful experience.”

Aquarius stretched as she headed back to the bathroom, a smile on her face. Whatever other complaints she had about Lucy, she would admit, her key owner had a good library. Still, she had left the crybaby alone long enough; time to check on her. Opening the bathroom door, Aquarius was immediately assailed by moans; she raised an eyebrow at the sight of Lucy.

The buxom blonde’s body was limp, held up entirely by the water tendrils that continued to fuck her. Her brown eyes were dazed and half closed; she looked on the verge of passing out.

Aquarius suppressed a small wince. ‘Maybe three hours was too long?’ Picking up her urn, the Zodiac Spirit pulled her water tendrils back into it; this time, she really did wince slightly when Lucy slumped the ground, her massive tits squashed under her body and her bubble butt in the air. She was soaked all over, with water and her own juices, her tongue hanging out of her mouth.

Slowly, the brown eyes rolled up and focused on Aquarius…then the biggest smile she had ever seen appeared on Lucy’s face. “Mmmmm…so much better,” she murmured, a bright flush on her cheeks. “Thank you so much, Aquarius; I love you…”

Feeling a blush of her own start to form on her face, Aquarius hurriedly straightened with a cough, putting a smirk on her face. “Yeah, yeah, whatever you say,” she said, unable to keep a trace of fondness out of her voice. “Just don’t forget that you owe me big time, and I’m going to collect VERY soon!”

With that, Aquarius headed back to the Spirit World, intent on finding Scorpio. Seeing Lucy like that had left her more than a little hot and bothered herself, and she was sure that her boyfriend wouldn’t mind helping her.

Sometimes its not her fault tho lol

Will you at least leave out the Wendy parts and let Gray get laid?
Maybe even let his Devil Slayer form give him a BBC.

And Cana would be a good member for the sex guild since she’s into both genders.

Gray will get laid more yes that is the plan

More Lucy greatness! Also her RNG is sorta bad that she grabbed Aquarius key first when could’ve gotten Tauros if she needed a good dicking plus it’s gonna be awhile until her and Gray starts to bang but I guess that gives me something to look forward to

And so begins Lucy’s side of the story.

lol yep. Her and her whacky adventures