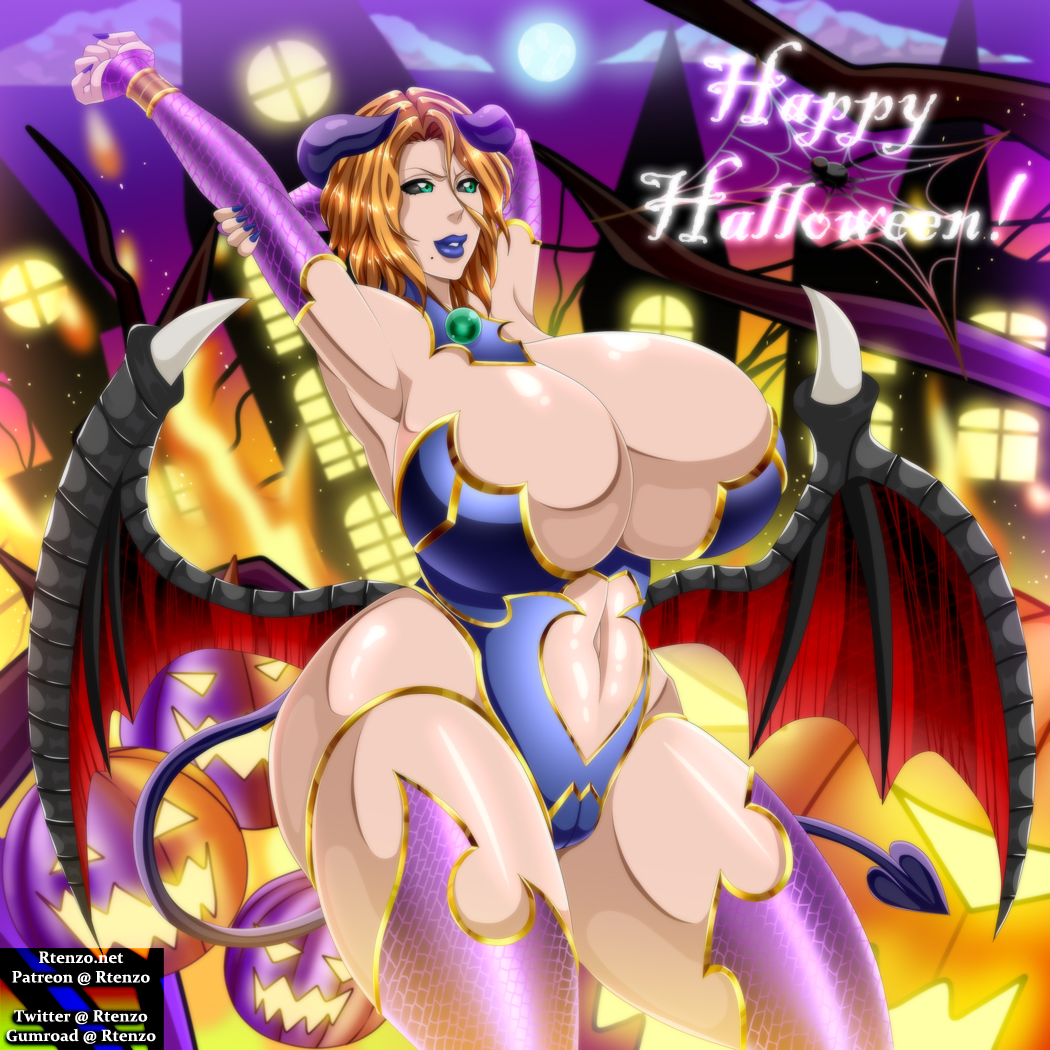 “I love Halloween!” Rangiku declared, looking around in admiration at all the decorations. This part of the neighborhood had really gone all out, which made her happy, not to mention there were plenty of people to admire her costume.

Or at least what they thought was her costume. In reality, it was her true body, as she was a hybrid soul of Succubus and Shinigami. It was a secret she long kept hidden from the Gotei 13. However, it wasn’t as unusual as she first thought considering her friend Ichigo Kurosaki was a hybrid of several races himself. The only thing she could not contain was her insatiable libido, which garnered her a reputation among the male Shinigami as someone ‘of easy virtue’. And while her true form might stick out too much in the Human World on most night, the Halloween season was the big exception, it was a time where she can be her real self. Not to mention an excellent opportunity to have some real fun.

And she had high hopes for her target tonight. With his help, she would get more than enough sexual energy.

Not too far away, Yushiro was also looking around in wonder. It was his first time experiencing Halloween in the Human World, and there were so many costumes, so many people, and so much candy! Truly, one of the greatest holidays on earth!

“Hello, Yushiro,~” a sultry voice from behind him cooed, sending shiver down his spine, and other body parts.

Turning around, Yushiro gulped at the sight of Rangiku, wearing the sexiest outfit he had seen tonight. And there was a predatory gleam in her eyes that made him feel both nervous and excited. “Oh, hello, Rangiku-chan! Are you trick or treating too?”

“Mmm, sort of,” she replied, looking him slowly up and down in his Soul Reaper outfit. “I’m after some…unusual treats, you could say.” She licked her lips while locking eyes with him, and Yushiro’s cock stiffened as he blushed.

“W-well, what are you looking for? Maybe I can help.”

He gaped as her eyes turned green, the sclera black.

“I was hoping you would say that.~”

Grabbing his arm, she pulled him into the closest nearby alley and pushed him against the wall. Then she was kissing him fiercely, her tongue plunging deep into his mouth.

After a moment of shock, Yushiro was eagerly kissing him back, his hands roaming over her body.

“Finally,” Rangiku sighed when the kiss finally ended. “I’ve been wanting to do this all night!”

“…um, Rangiku-chan? What is going on? What did your eyes change like that?” Yushiro certainly didn’t mind the kiss, but he was undeniably curious about what the hell was going on.

Rangiku smirked. “Tell you what, stud: you do a good enough job satisfying me tonight, and I’ll tell you all my secrets.”

Yushiro blinked before starting to grin. “You mean…”

Then he scooped her up in his arms and Shunpo-ed away, arriving an instant later on the balcony of a hotel room.

Rangiku stared for a moment before smirking. “Did you already have this planned out?”

“Well, I was hopeful at least, especially when I saw how sexy some of the costumes were; yours is by far the best one though.”

Laughing in delight, Rangiku took a few steps back, striking a pose with her hands on her hips. “I love a man with a plan, but enough talking: let’s have some fun!~”

She started a slow striptease, or what looked like a striptease. Since her ‘costume’ was actually a part of her, she was actually just making it disappear. Gratified to see the desire flare up in Yushiro’s eyes, Rangiku soon stood naked in front of him.

Then it was his turn to disrobe, and Rangiku licked her lips, rubbing her thighs together as more and more of his body was revealed. She let out a low whistle when his enormous dick came to light, making him blush but also smile proudly. “Mmm, seeing that never gets old; I always know I’m in for a great night with you!”

Dropping to all fours, she crawled back over to him, watching as his cock swelled even more. Reaching him, Rangiku wrapped her tits around it and began licking and kissing it all over.

“That feels so good,” Yushiro moaned, running his fingers through her hair. “Don’t stop, Rangiku-chan; get me as hard as you can, and I’ll fuck you like you’ve never been fucked before!”

“That’s a tall order, but hey, I’m looking forward to you trying,” Rangiku giggled, moaning as he began to play with her nipples. Taking a break from the licking, she started taking his whole dick into her mouth, inch by inch, feeling her jaw stretch more and more. Already, she could feel the sexual energy flow into her body.

“Oh hell yes! Take it all the way! No one has ever gotten this far! not even nee-chan!” Yushiro growled, his own lust and desire surging through his body. Grabbing as much of her tits as he could, he pushed them together, fondling them with all his strength.

Rangiku moaned around his cock, feeling him shudder. Drawing back her head, she looked up at him. “Fuck me right now!” she demanded, panting. “I’m so fucking hot and ready!”

Effortlessly lifting her to her feet and then into his arms, Yushiro only took a moment to line up his erection before plunging it deep into her tight, wet pussy. “Like this?!”

“FUCK YEAH!” she screamed, wrapping her legs and arms around him, incidentally burying his face in her cleavage. She screamed again when he pushed her against the wall and began slamming his dick into her. “AH! OH! MMM!”

With his face between her massive tits, Yushiro couldn’t make himself be heard; instead, he focused on giving them the same attention Rangiku had given his dick: sucking, licking, and kissing them all over. He could feel her nipples hardening, which spurred him into fucking her harder and faster.

Rangiku clawed at his back as her body got even hotter, especially her pussy. Sweat was trickling down her skin and dripping to the floor; she could feel an orgasm coming…and then it hit!

“FUUUUUUCK! SOOOOOO GOOOOOOOOOD! AAAAHHHHH!!!” It was a pleasure beyond just the physical and emotional; it was spiritual for her, as her succubus nature was finally sated and filled, a feeling of satisfaction she couldn’t get anywhere else.

With a muffled roar, Yushiro came as well, pumping his seed into her pussy. Then, showing off his insane stamina, he pulled out and immediately pushed into her ass!

“AAAAIIIIIIEEEEE! OH MY GOD!!!” Rangiku’s shriek came close to breaking every piece of glass in the room as she immediately came again, throwing her head back to scream at the ceiling.

“Happy Halloween, Rangiku-chan!” Yushiro told her with a huge grin, not slowing down in the least. “You just got a trick and a treat at the same time! How does it feel?!” For some reason, this was feeling better than any sex he’d ever had. He felt like he can go on for days!

“AHHH! DON’T STOP! MORE MORE MORE!” Rangiku panted, an equally large smile on her face. “I LOVE GETTING FUCKED BY YOU! I CAN’T GET ENOUGH!” Sexual energy was pouring out of her, charging up both her and Yushiro. With this much power, they could keep fucking for longer than ever!

Best Halloween ever, they both thought happily, as the empowered fucking continued.

Oh wow, this entire thing was pretty awesome. The concept for the story and the picture. Sheers, mates. Good job.

Thanks, I’m glad you liked the story. It was a little different than my normal ones.

This was a very nice Halloween one shot and a excellent picture. I really love the design and feel.

So Rangiku is a Succubus here, huh? Somehow that fits her well here, especially her black sclera eyes. XD And Yushiro was today’s willing volunteer. Plus since it’s Halloween, there was no reason for either of them to hold back, in Human World or otherwise. Not to mention this story certainly fits the tone for what it was going for.

All that and this shows that the best way to deal with a Succubus is to give her exactly what she wants, an empowering no holds barred pounding. Good thing Yushiro could keep up with her or he would’ve been in trouble. XD

Well, I thoroughly enjoyed this. Nice work, and Happy Halloween! 😀

Happy Halloween to you as well, and thanks for the kind words about the story; I’m glad you enjoyed it.

This was a great holiday one shot. Can you do one where Ichigo gets Yoruichi, Harribel, and Jackie for Thanksgiving? Or him getting a night with Unohana and Isane for Christmas?

You sir have great ideas, and taste and now my utmost respect.