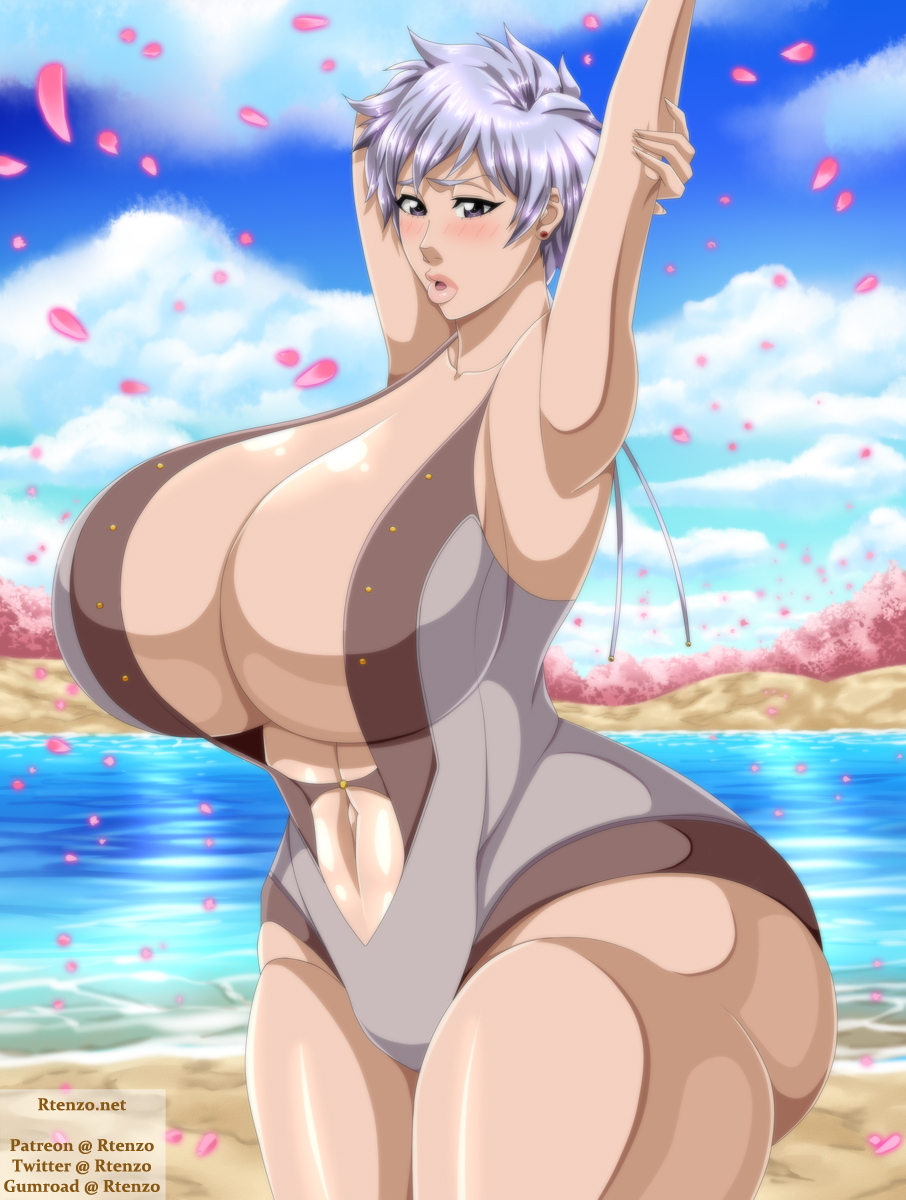 She was not happy about that, not at all. To make things even worse, Hanataro had been left in charge of everything while Unohana-sama treated Captain Hitsugaya’s injuries personally today. Honestly, Isane was expecting complete chaos when she went back to work; nothing against Hanataro, but he didn’t really have the personality to hold things together. Oh well, that was a worry for another day.

“Hey baby, how about you bring those fat tits over here?”

“Damn girl, I got the cock that fine ass needs!”

“I would love to have your thick thighs squeezing me, what do you say to a good time?”

Nearby, another pair of sexy ladies were watching Isane stroll past; they were not pouting, no matter what anyone said. “I still can’t believe how much attention she gets,” Hikifune grumbled, still salty about how little business her kissing booth had gotten during the fundraiser, all because of Isane’s enormous tits and ass stealing all the customers! She even got to enjoy an amazingly huge cock that the royal guard captain had been thinking about ever since.

“I know.” Rangiku hefted her own tits and stared down at them forlornly. “I was hoping she would stay small, like she was that one day. Guess that was too much to hope for…” Rangiku looked at her own tits disappointingly.

Hikifune rolled her eyes. “If you’re truly that desperate, why not just pay a visit to your resident mad scientist? The not-so-crazy-and-sadistic one,” she added, thinking of Mayuri.

“You mean Urahara? You really think he would help me?”

Hikifune nodded. “Yes! My predecessor will set you up with a pair of boobs that will dwarf Isane’s; that pervert has no limits, unlike your Fourth Division captain.”

Rangiku considered that, a thoughtful look on her face. “Hmmmmm…..”

Meanwhile, Isane was continuing her walk, and her mood was made worse by what she saw next: Harribel and Mila Rose were at it again, having claimed two more victims to satisfy their lust.

Ichigo and Renji, flat on their backs with their legs being held up by the two Amazons, groaned and moaned, pain and pleasure intermingling. Thus far, they seemed to be holding out much better than Yushiro and Hitsugaya had, which isn’t surprising. The two latter individuals were far stronger than the two former after all.

Isane sighed wistfully. “That looks like soooo much fun,” she commented softly, feeling her pussy dampen, but she walked on; she wasn’t in the mood to share.

The longer she walked, the more Isane considered turning back around and begging to join in. Just as she was on the verge of doing so, she at last saw a familiar face. “Ishida-san!” she called out, breaking into a run and smiling brightly.

At the sound of his name, Ishida Uryu turned around; seeing Isane bounce and jiggle towards him, he immediately blushed bright red, trying to hide it by adjusting his glasses. “A-ah, hello, Isane-san,” he replied, flushing darker at his stammer.

Coming to a halt in front of him, Isane giggled lightly. “No need to be so shy,” she purred, leaning in closer, her breasts almost touching his chest. “How are you doing, Ishida-san? It’s been a while since we last saw each other.” She lightly touched his shoulder and gave him a flirtatious smile.

Ishida visibly gulped before rallying himself enough to reply, “I’ve been, uh, well, Isane-san. And how are you? You seem…different.” His eyes darted down to her breasts before bouncing back up to her face.

‘This is my chance!‘ Putting on a saddened expression, Isane sighed. “Actually, I’m not doing so well…but I think you can help me. Mind if we go someplace more…private?” She licked her lips, slowly, and wondered if Ishida was going to pass out from all the blood rushing to his face.

It took a moment for Ishida to respond; seemingly incapable of speech, he simply gestured for Isane to lead the way. Smirking, she did so, making sure to put an extra sway into her hips to give him a good show.

Reaching a private spot on the beach after a couple of minutes of walking, Isane turned around, not all displeased to find Ishida staring at her ass. When his eyes snapped back up to her face, she merely smiled; lifting her hands, she began playing with her tits, moaning softly as her nipples hardened.

Ishida stared, wide-eyed behind his glasses and face completely crimson. They threatened to pop out of his skull when Isane pulled down her swimsuit, completely exposing her magnificent breasts. Giggling at his reaction, she did an impromptu striptease, until she was completely naked. “Now, lets see what you have for me,” she said in a sultry voice, pulling down his shorts.

“…” Isane stared, her left eye twitching. Ishida was…TINY. The smallest penis she’d seen thus far, smaller than all of her customers from the kissing booth!

But, she had already started, so she might as well finish it. Wrapping her tits around his dick, Isane prepared to give him a paizuri. ‘Maybe he really knows how to use it, despite its size,‘ she told herself hopefully.

“Oh my!” Ishida gasped, sensations unlike any he had ever experienced before slamming into him as Isane lavished his cock with sensual attention. “That feels…magnificent! I love it!”

Isane, in contrast, was not nearly as happy. Her tits had completely swallowed up Ishida’s dick, making her hunt for it. Finally finding it, she craned her neck down uncomfortably lower than she was used to and began sucking on it as hard as she could. ‘Geeze, Its so thin! I feel like I’m drinking from a straw!‘ she thought glumly, easily sucking the entire length of it into her mouth.

Arching his back, Ishida dug his fingers into the sand. “Yes, Isane! Please, whatever you’re doing, please don’t stop!” This was amazing! No wonder so many people are obsessed with sex!

To Isane’s dismay, it became clear that Ishida wasn’t going to get any bigger or harder. She only had one hope left; bouncing to her feet, she straddled his body and sank down, her pussy swallowing up his penis.

‘…I can’t feel anything! NOOOOOO!‘ she wailed internally, bouncing up and down as hard and as fast she could, trying in vain to feel something, anything!

Ishida was in heaven. His cock was being squeezed and massaged by Isane’s hot, tight pussy, and her huge tits were jigging right in front of him! Grabbing them with both hands, he stared at her face. It was a mask of concentration, and his heart warmed. She was clearly putting her all into this. Well, he would do the same!

Isane felt a spark of hope when Ishida began fucking her back, but it quickly went out; no matter how hard they both tried, she wasn’t getting anything from this. The strong hands groping her tits felt nice, but they weren’t nearly enough to satisfy her.

She had gambled on Ishida, and lost big time.

It seemed to work; once Ishida was done and had slumped back down on the sand, he gave her a weary but very contented smile. “That was…” He shook his head. “Words fail me, but…thank you, Isane. I can only hope that I have helped you as much as you have helped me.”

“Aww, you’re so sweet,” Isane told him with a smile, neatly sidestepping a real response and mentally shaking her fists at the sky.

and here i was hoping that uryu could been the small until simulated type due to his own shy nature around women that he would try to self control himself but explode when pushed to far. not to outrageous degrees but certainly significant size changes. he would certainly sound like the type who would prioritize his partners pleasure over his own.

lol That would have been a neat twist! However, I wanted to try something different for this chapter since everyone is packin a monster dong, I wanted to explore how Isane would react to a small one

She’s in heat, totally frustrated, the dudes with the biggest possible packages were either on the injured or disabled list or taken by the same two Arrancar women who put them there in the first place [I still love them though], and everyone else hitting on her aren’t even worth her time or energy.

Of course it doesn’t help that Hikifune and Rangiku were chatting about her, Rangiku more so. Sounds like someone’s still jealous. Haha.

Which brings us to Uryu. Now this was just sad. Isane was really hoping for a big or at least an average dick, but it wasn’t the case this time. In fact, it was the polar opposite…! Well that sucked! I really hope someone actually satisfies her later.

But I have to say, this picture is a really great picture! The overall design and color scheme are nicely done. Not only that, she’s thick in all the right places!

Not bad with the story, and excellent picture!

Thank you Hiryu, happy you like the artwork and that you enjoyed the story. 😀🌟

Congratulation Isane, you managed to find the only named character who doesn’t have a cock large enough to drag on the ground. It’s like losing the lottery when you had the winning numbers in advance.

lol that’s a funny way to look at it

Happy you enjoy it I think? sorry you didn’t like the sex, I think the overall is suppose to be 6.5 if you’re doing averages. Hopefully you like what I put out next time