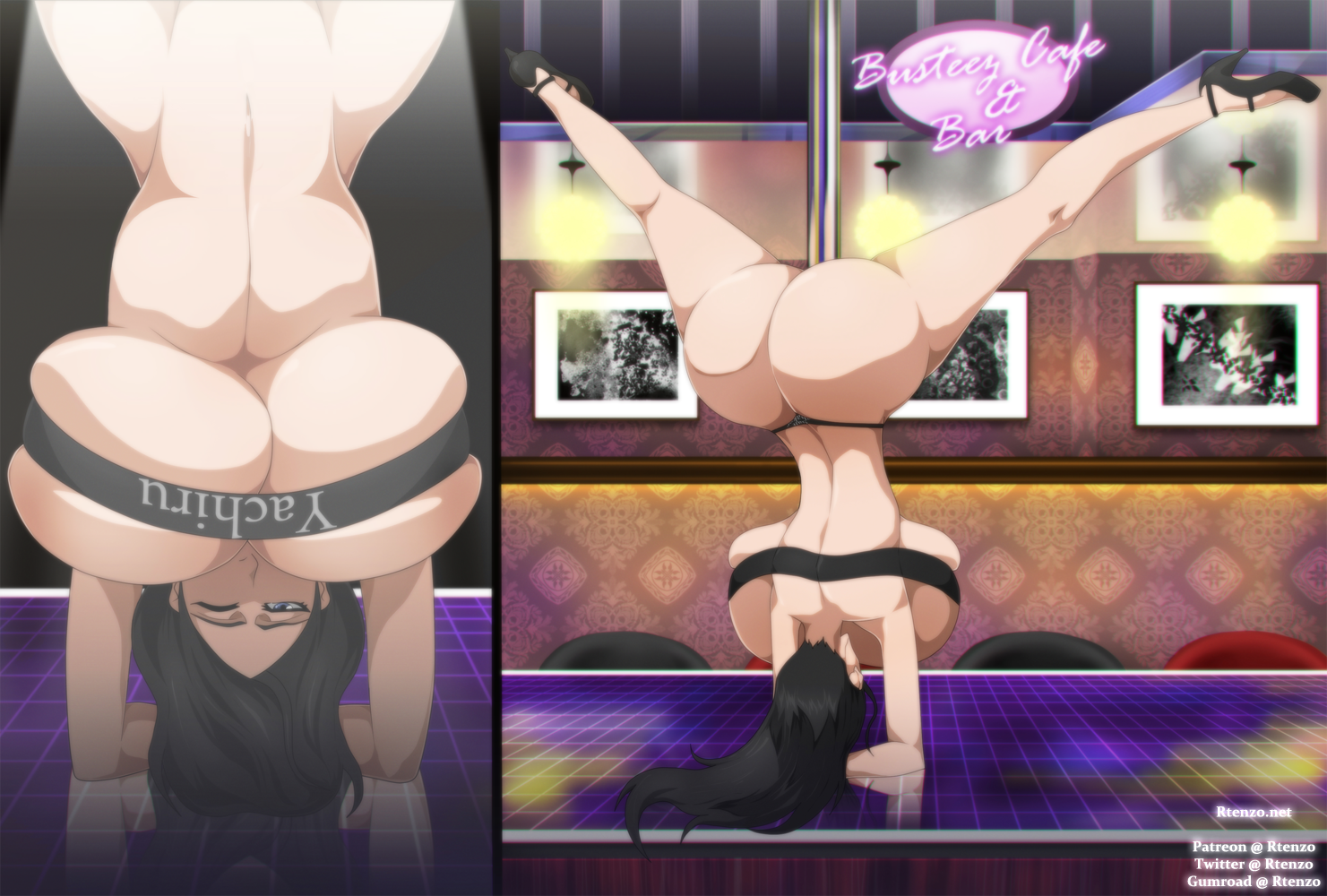 “Damn,” the man said, impressed, his eyes fixed on the stage. Or rather, on the very beautiful and incredibly voluptuous woman dancing on it. “How the hell can she dance like that, with such huge tits and ass?”

His friend snorted, reaching for another drink. “Dance? Hell, I’m impressed she can even walk! Can you imagine trying to keep your balance with those mounds?”

“Maybe they balance each other out?” the first man suggested, half-serious. “I mean, she’s got huge breasts in front of her and that enormous ass behind her, so they should weight about the same.”

Their conversation was delayed when the dancer, Yachiru if the name on her ‘top’ was accurate, came shimmying up to their side of the stage. Both men watched with growing arousal as she bent, twirled, and moved in front of them, her breasts and butt jiggling and shaking with even the smallest of movements.

Then their jaws dropped as she planted her forearms on the ground and lifted the rest of her body straight into the air. The noise of the crowd was deafening as she spread her legs in a split. Her tiny thong barely kept her crotch covered, and her top must have been magic, since it managed to stay in place as well.

Her breasts hung down, partially obscuring her face, but the two men were still able to see it when she dropped them a sultry wink. Then, in an impressive display of strength, she pushed herself fully into the air and landed neatly on her feet to continue her show.

“…how much does a private room and a private dance cost?” the first man asked in a dazed voice.

Draining his drink, his friend gave him a determined look. “Let’s find out… after she’s finished.”

“Oh fuck yeah!” the man roared, pounding Unohana from behind, her huge ass bouncing and jiggling from both his thrusting hip and from him spanking her with one hand. “You like that?! You like me fucking this big fat whore ass of yours?!”

Unohana didn’t reply; not because she didn’t have anything to say, but because her mouth was full of his friend’s rock-hard cock. He pumped it rapidly into her mouth; it was so long it pushed into her throat, and so big that it stretched her jaw to its limit. She was barely thinking at this point; all Unohana was focused on was moving with the two cocks and getting herself and her partners off. It had only been two hours, after all, and they had paid for four.

She was going to make sure they all left the private room completely satisfied. And as Unohana moaned around the dick in her mouth as another orgasm slammed into her, she decided that she would keep in touch with these two.

They really knew what they were doing.

I need a drink.