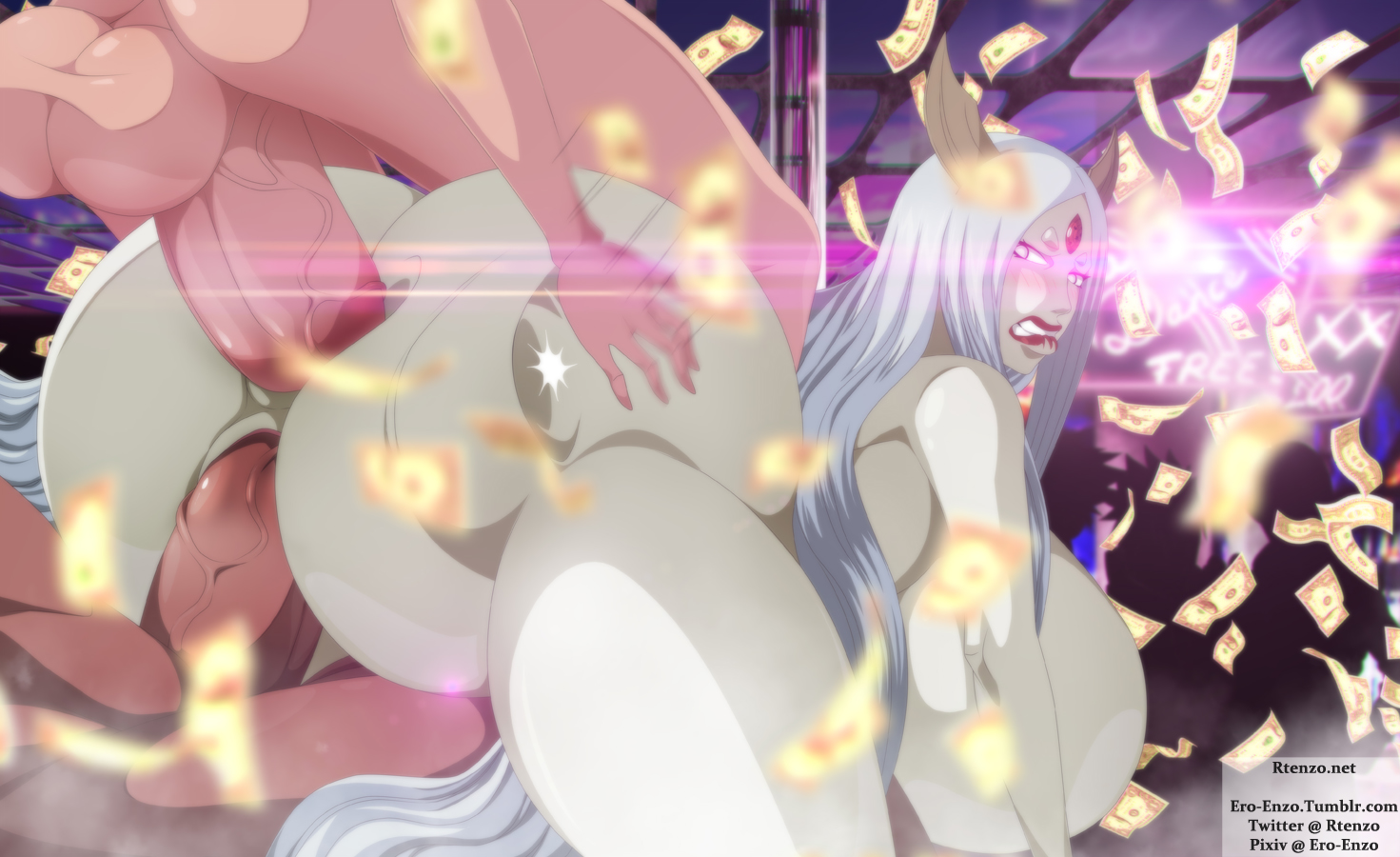 Kaguya frowned (she was not pouting, no matter what anyone said) as she waited for her cue. She had been told that the live sex show was a tradition for all the new girls; after going through it once, it was purely voluntary.

None of that bothered Kaguya, but the smirks on the other women’s faces had made her suspicious. There was something they weren’t telling her…
“And now, put your hands together for our newest slut: Kaguya!”

And there was the voice of the announcer over the loudspeaker. Kaguya strutted out onto the stage completely naked, her ass and tits bouncing with each step as the crowd went wild. From what she had gathered, her horns, third eye, and unusual skin color made her that more exotic and attractive to people.

Of course, having a huge butt and enormous breasts didn’t hurt either.

Two men were waiting for her, wearing nothing but huge grins. Kaguya swallowed when she saw their dicks; if they weren’t the biggest ones she had ever seen, they were close. And soon they would be fucking her.

“All right, everyone knows what happens now: START THE MUSIC!”

The heavy bass started thumping from the loudspeakers as the darker skinned man lay down on the floor, cock sticking straight up like spike. Putting an extra sway in her step, Kaguya strutted over to him, swung her leg over, and then slowly impaled herself on his dick, biting her lower lip as her hot, wet pussy wrapped around it. Gods, it was filling her up and felt so good…

Then she was falling forward as he seized her breasts and pulled on them, bending her at the waist and thrusting her ass high into the air. The crowd, already raucous, broke into even louder cheers and cat-calls at the sight, money raining down on the stage. They knew what was coming next.

She squealed long and loud at the sudden spank, looking back with wide eyes. No one said anything about being spanked! And the worst part was, a large part of her liked it and wanted more of it.
“C’mon slut, move this fat ass,” the man ordered, raising his hand again. “Unless you like this.”

SMACK! The hard spank landed on her right ass cheek, the soft globe rippling and jiggling with kinetic energy. The crowd’s roar rose to a fever pitch, and so much money was coming down it seemed like it was raining.

Kaguya bit her lower lip to keep quiet, but a loud moan still slipped out. The man under her laughed. “Hey, she tightened up her pussy when you spanked her! Do it again! Punish the naughty whore!”

Looking back, she saw that the second man was getting ready to do just that. Getting fucked in her ass and pussy while getting spanked, all in front of a huge crowd?

She had never been hornier in her life.