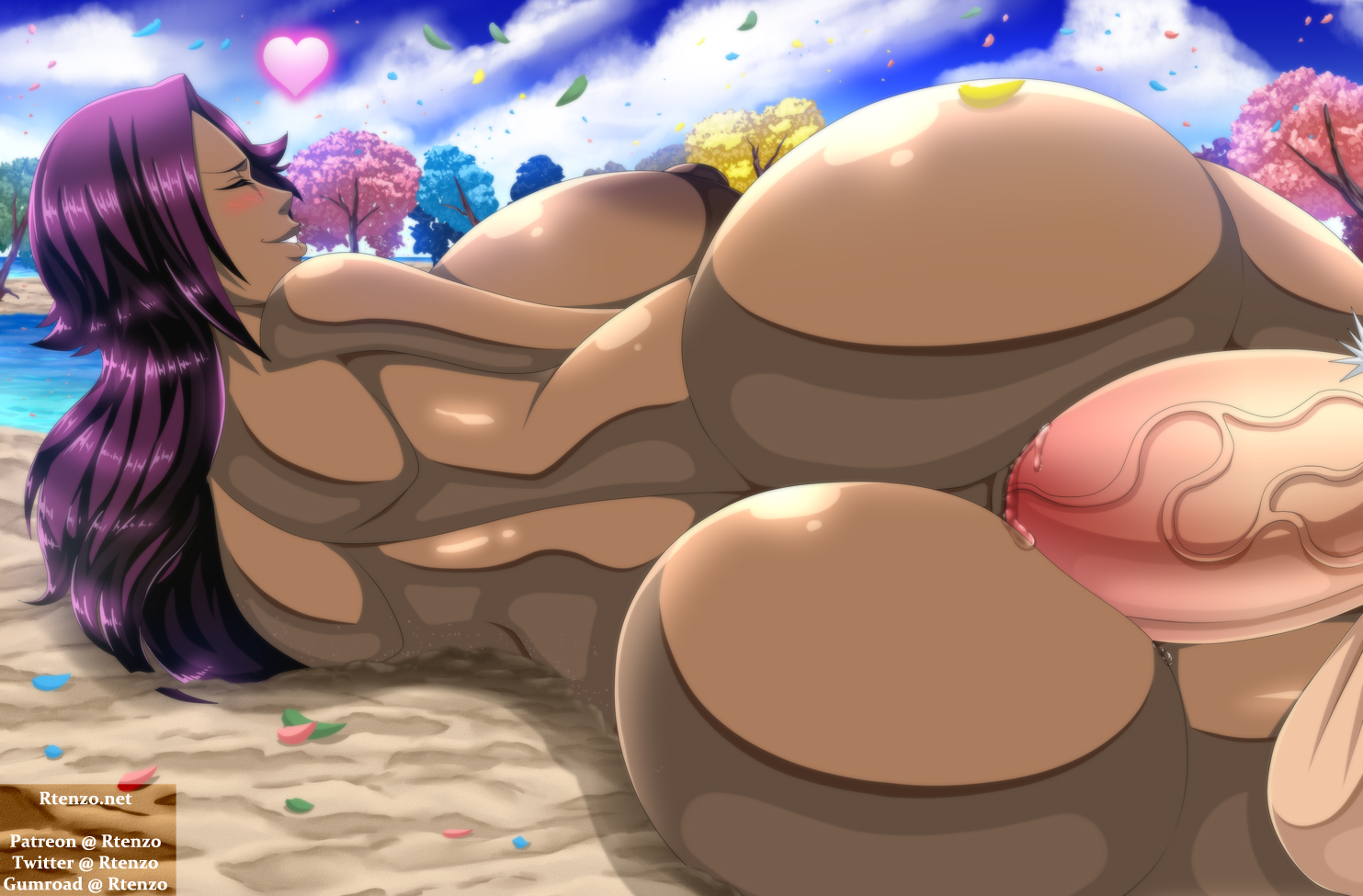 “Someone is looking pretty pleased with themselves.~”

The teasing voice cut through Hitsugaya’s haze of pleasure as he ambled along the beach. Looking up, he smirked at the sight of Yoruichi in a tiny black bikini, reclining on the sand.

“I suppose I am, and you would know all about being pleased with yourself, Yoruichi-san,” Hitsugaya teased back, feeling his cock stir at the sight of Yoruichi’s very sexy body. No matter how many times he saw all the ladies around them, the sights never got old.

“Oooh! You’re definitely feeling good if you’re willing to reply like that!” Yoruichi gave him a bright smile as she sat up to give him her full attention. “And you have that ‘good sex’ look about you. So,” she leered at him, leaning forward to emphasize her breasts, “Who was the lucky lady this time?”

Fighting back a small blush, Hitsugaya replied, “Hinamori. We were…catching up and reconnecting.”

“Is that what they’re calling it nowadays?” Yoruichi asked ‘innocently,’ giggling when he lost the battle against the blush and gave her a mild glare. “Ah, there’s the famous Captain Hitsugaya scowl! But in all seriousness…”

The smile Yoruichi gave Hitsugaya this time was warm and sincere. “I’m glad for both of you. Almost no one escaped the wars untouched, but the two of you had more personal trauma; I’m glad you’re both working through it.”

Hitsugaya stayed silent for a moment, hiding his surprise. It was always a bit unexpected when Yoruichi dropped the teasing and gave genuine compliments. Unexpected, but far from unwelcome.

“But you know…” Naturally, the moment didn’t last long, as evidenced by the gleam in Yoruichi’s golden eyes. “I’m feeling pretty stressed myself lately.” A small but genuine scowl crossed her pretty face. “My dear little brother caused a bit of a mess not too long ago, and even more embarrassment for me and our family.”

Stifling a snort of amusement, Hitsugaya nodded, trying to keep a straight face. “I suppose I can help you out.”

“Great! I knew you wouldn’t let me down!” Yoruichi told him cheerfully, before stripping out of her bikini and appearing next to him in less time than it took to blink.

‘Goddess of Flash in more ways than one,’ was Hitsugaya’s irreverent thought, even as he gasped softly when Yoruichi pulled down his trunks and wrapped her tits around his cock.

“Mmm, and your dick never lets me down,~” Yoruichi whispered sensually, her tongue darting out to lick the head of it. Rubbing her boobs up and down the hard length of his shaft, her pussy getting hot and wet as it rapidly hardened and lengthened.

“I do…my best…” Hitsugaya gasped out, locking his knees to keep from falling down. Yoruichi’s mouth and breasts felt incredible, and he knew her pussy would be even better. It wasn’t long before he was more than ready.

Leaning back and licking her lips at the sight of his erection, Yoruichi laid down on her side, her shapely ass pointed enticingly at Hitsugaya. “Ready when you are,~” she whispered sensually, her half-lidded eyes fixed on his eager blue ones.

Hitsugaya wasted no time; kneeling behind Yoruichi, he slowly pushed his dick into her pussy. As expected, it was hot, wet, and tight, though not as tight as he could remember it being. All the fuckings she had received from him and other massive cocks had loosened her vagina up considerably.

Which wasn’t to say it didn’t feel great; Hitsugaya groaned with pleasure as her pussy squeezed his cock. Her long, muscular legs helped as well. He could feel the power in them as their bodies rubbed together.

“Mmmmm!~” Yoruichi moaned, closing her eyes with a smile on her face and arching her back as she was penetrated. “Oooh, this never gets old!” she told him happily, her nipples hardening.

“Good to hear. Now just lay back and enjoy,” Hitsugaya told her, taking a firm grip of her thighs and pulling back his hips.

Yoruichi squealed in delight when his cock slammed back into her; she squeezed her thighs together as Hitsugaya pounded her again and again, rapidly settling into a fast rhythm of thrusts. “Ahhh! I can just feel the stress melting away…but don’t you dare stop!”

“Wouldn’t dream of it!” Hitsugaya assured her, thoroughly enjoying her body and blissful expression on her face. Seeing her eyes close again, he got a mischievous look on his face. He pulled his cock all the way out of her pussy, and then-

“AAAIIIIEEE!” Yoruichi screamed in surprised pleasure when Hitsugaya’s dick abruptly plowed into her ass! “You brat! You tricked me!~” Obviously, she wasn’t upset, though she still put on a good glare over her shoulder at the white-haired captain. She bit her lip, moaning, when he reached up to grab her tits.

“Are you saying I should stop-mmm!” Hitsugaya started to tease her, only to blinked when she managed to twist around and up to kiss him.

“Don’t you dare,” Yoruichi whispered when the kiss ended, eyes smoldering. “In fact, I want you to show me why you’re considered a prodigy of a captain.”

Smirking back, Hitsugaya nodded. “I hope you’re ready then.”

Momo watched, wide-eyed, as Shiro-chan and Yoruichi-sama fucked each other. Right now, Shiro-chan was really pounding Yoruichi’s ass, and if her screams of pleasure were any indication, she was loving it.

Panting, knowing she should look away, but unable to, Momo whimpered as she rubbed her pussy. ‘Watching Shiro-chan fuck another woman…it’s so HOT!‘

Visions of her involved in the action made her face turn bright red…and her pussy even hotter and wetter.

Nothing better than a monster cock as a stress reliever, I hope we more of Toshiro x Yoruichi like we do with Yushiro x Isane cause your interracial pics are hot

Thank you man. I don’t get asked to draw Toshiro very often but I would not mind pairing him with her

Will we see Yoruichi with a monster thicc ass to match Toshiro’s massive member?

Excellent site of Yoruichi’s back side. Also enjoying the rainbow of cherry blossom trees in the setting.

This was quite enjoyable! Yoruichi is just too sexy for words to describe her and you drew her perfectly! Her expression when she takes it up her ass, the size of her ass is spot on! Not small but not too large just fat and perfect ! Her tits are perfect and it’s nice to see Hitsugaya get some more action is nice, he deserves it. I kinda wish is was ichigo but that’s fine. The story is also quite good on how these two react and how they help each other relive some stress by pounding the flash goddess seneless.
8/10

Short but to the point. I really liked how this chapter went from beginning to end.

Not just with the sex of course, which was very well balanced, but also the overall good chemistry between Toshiro and Yoruichi. Though Momo looking on elsewhere at the end of the story pretty much said it all. Haha.

And the best part is undoubtedly the picture itself! Especially with Yoruichi having her hair down. I hope she’s like this more often.

Overall, I really enjoyed this. Can’t wait for more. 😀

Yea the writer did great, Thank you for the feedback Hiryu!