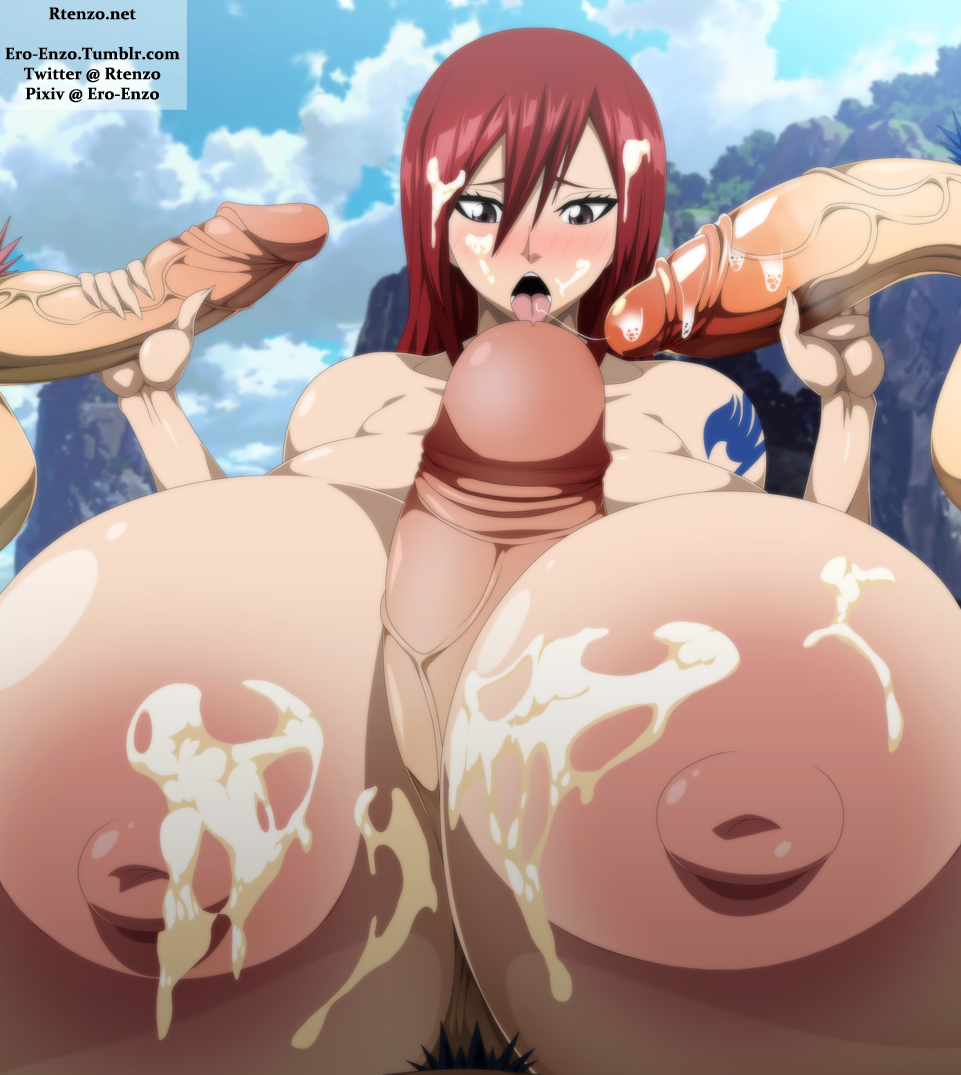 So how did we get here?

Ezra wasn’t supposed to be doing this out in the open, for almost everyone to see.

While everyone at the Beach was having fun. Jellal and Ezra were by the sand relaxing. Ezra getting a good tan and Jellal just enjoying the view. It was gonna get boring soon, so Erza suggested they go somewhere private.

They walked over to some rocks where nobody can see them. Erza immediately told him, “take off your shorts now.” Jellal said to her, “Wait? You want do it here… in the open” she replied, “Well we’re not going back to the hotel and wait until later to do it.”

Jellal wasn’t gonna do it until Erza said, “Besides? You think I wouldn’t notice how hard you are for looking at my tits?” She points to his bugle and Jellal realize he can’t turn back down. They threw their clothes on the side and began making out naked. She rubbed his cock while he groped her huge knockers. Just before she was about to suck him off…

They turned around and saw Natsu and Gray looking that them. Erza tried to cover herself immediately, Jellal replied, “What the hell! I thought you guy were with your girls!” Gray replied, “Well we were until we looked at you guys leaving. You think we didn’t notice?” Natsu replied with a wide grin, “Yeah and plus… they gave us the okay to join you”

Both looked confused and shocked when Natsu said that. He told them how they got immediately hard when, not only did they see Erza’s massive tits, they thought Jellal was gonna fuck her. When Lucy and Juvia saw how hard they were by looking, the girls wanted them to have fun but not to take it to the extreme. “So…”, Gray took off his shorts and showed off his massive cock. “Are we gonna this or stand around?”

Erza only wanted to do it with Jellal. She looked at him first but when she saw Gray’s monster of a cock, her nipples became hard. She wanted to know how it felt getting fucked by that size. “Alright, Let’s have some fun” she said.

Natsu took his shorts off and began putting his cock up her ass. Gray wanted to do her but wanted to feel her massive tits, so he puts his cock between them. “Perfect it”, he said. Jellal begins to look jealous but that changed when she sucked him. Natsu was gonna begin fucking her ass but then he suddenly remembered what Lucy told him, “Fuck Erza like crazy and I’ll put you on the roller coasters 50 times as punishment”

He didn’t wanted to risk it so he let Erza give him a hand job. All three moaned in pleasure, getting fucked by Erza was the best. Jellal felt his cock getting harder and bigger every time she sucked it good. Gray and her tits were in perfect sync. His cock was getting bigger and bigger. Erza then started to suck his giant cock. Natsu felt his dick getting a good hand job. He then noticed how fast she was going, he was gonna be the first one to cum until, “Crap!” Gray couldn’t take it anymore and immediately came over her tits and face.

Jellal, then came over her face and as well and so did Natsu as well. Erza kept going, hoping to get more while she was covered. “Don’t stop guys, I still want more!” She said sucking Grays like a lollipop. Jellal wanted to fuck her so badly, he lifts her and then shoved his cock in her pussy. Erza screamed but keep sucking Gray off good. Natsu wanted some of the action, “Move over ice brain” as he pushed Gray away. “I wanna have some fun too”, he immediately put is cock between her tits. “You’ll pay for that lazy pyro”, Gray said as he let Erza Suck his balls good

That lead to where we are now.

Jellal went over to her, “You okay?” He said while looking at her. Erza was out of it until she heard his voice, “yeah, I’m fine. I just can’t move after that” He sat next to her and began to cuddle her as they watched the sun set over the ocean.