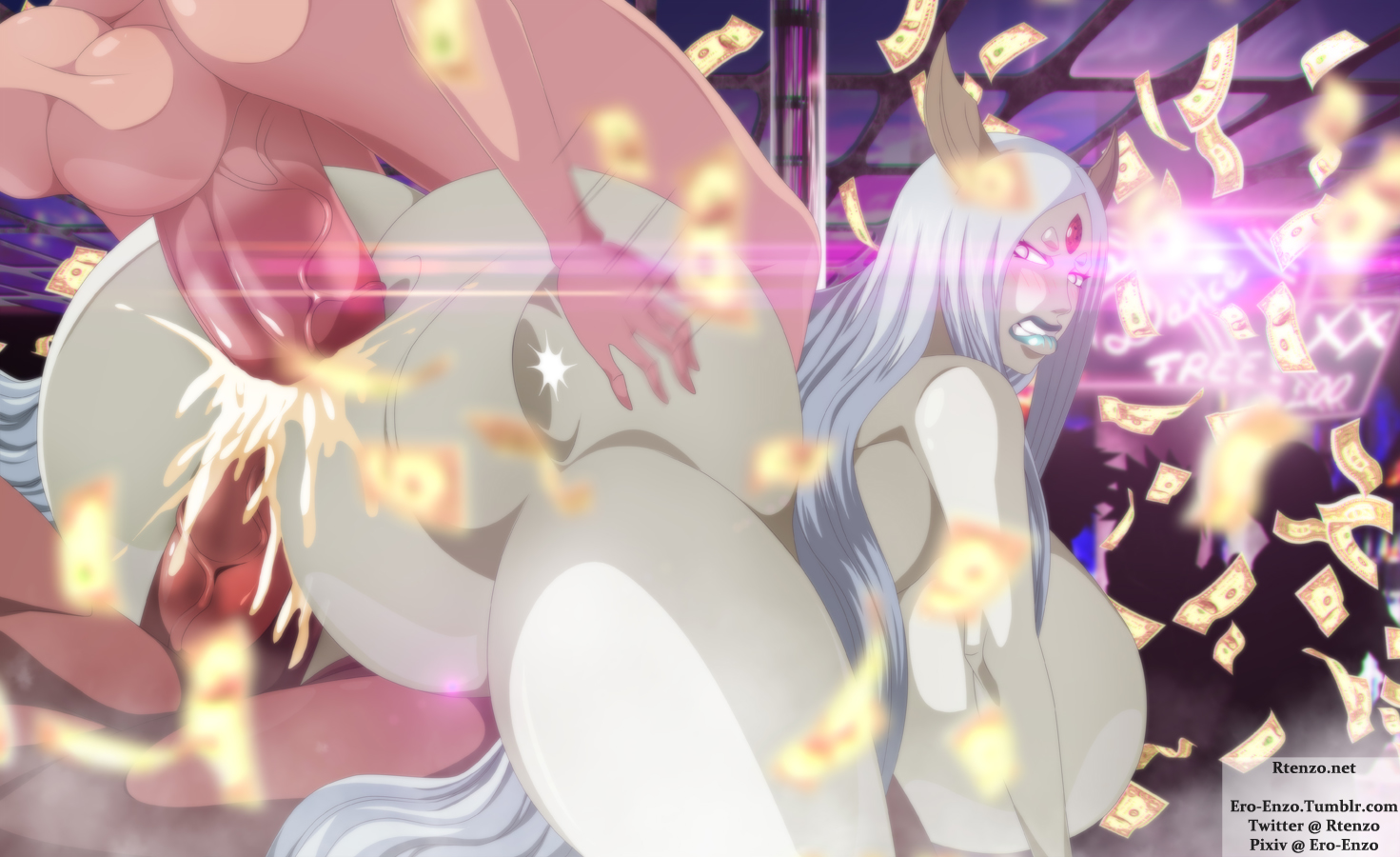 The music pulsed loudly from the speakers, nearly drowning out the cheers of the crowd as Kaguya worked her hips up and down between the two young men she was currently sandwiched between on the stage.  Bills of low denominations fluttered about like butterflies.  The white haired goddess tried not to feel insulted, the Land of Waves wasn’t as highly prosperous as Konoha, and this Busteez had only just opened.

“Shannaroo!!!  Look at her go folks!  Kaguya’s already drained six guys dry, will these latest challengers be able to take her down, or will they too take the walk of shame!!!???” came Sakura’s voice over the speakers.

Inari was the only one she didn’t know, the other was a man she’d danced for many times before in Konoha, his name was Darui, the Raikage’s right hand man.  What he was doing here she didn’t know or care, and she didn’t have time to ask before the music began making the walls shake again.  Inari was young, but hung like a donkey; Kaguya couldn’t stop herself from moaning as she felt him sliding deep inside her asshole.  She rolled her hips faster as Inari slapped his hand down on her ass, making it jiggle erotically.

Chewing her lower lip, Kaguya stifled another orgasm; she would not lose, not here, not to these peasants, no matter how good it felt!  “Hmmmmmmmmmh!! is that all you boys have?!” she asked, “Come on, where are the MEN here?” she called out.

“Oh yeah, take this!!!!” Inari replied his hips moving even faster now, making a slap slap slap sound against her ass as Kaguya bit down on her lower lip harder.

“Hoooahhh!!! Hear that folks, Kaguya throwing down a gauntlet!” Sakura’s voice blared over the speaker.  “What will our competitors show us against our snow white beauty?” she asked, Kaguya couldn’t help but think Hanabi was better at this.  She could really work the crowd into a frenzy.

“MMMMMMMMMMMMH!!!!” Kaguya moaned, “YEAH! THAT’S IT!!! LIKE THAT!!!, POUND MY HOLES MOOOORE!!!” she screamed as her tits bounced in the face of the young man beneath her.  Before tonight’s show, Sakura had helped her tweak the jutsu that had left her tits nearly as big as her entire body.  The pink haired girl had redistributed some of the expansion to her ass and shrunk her breasts down to a somewhat more manageable size.  She was grateful for it, while she loved being ogled and desired by men and women alike, the stares then weren’t adoration.

“Ohhh, is this it folks, is our Kaguya gonna finally be satisfied by these latest two studs?” Sakura asked.

“Shannaroo!!!!!  And there it is!!!  We have our winner’s folks!!!” Sakura called, the crowd erupted in cheers as more money fell like snow.  “The victors will both receive a weekend V.I.P. pass to the Nami no Kuni Busteez, let’s hear it for Kaguya and all our competitors.”

“Holy crap, you okay Kaguya?” Sakura asked.  Kaguya knew why, she could feel her ass and cunt gaping open as her head rested on the girls breasts.

“What, Naruto’s not the only one who can do it.  Though one is the best I can manage on a good day.” the clone said before vanishing in a puff of smoke once Kaguya was solidly on her feet.  Inari and Darui walked out into the cheering crowd as some of the male employees began sweeping up the money that cluttered the floor.  As the main attraction, Kaguya would get half; the rest would be divided evenly with the other dancers currently working the smaller stages.

The real Sakura came down from the booth after setting up an automatic playlist.  She wore only a hot pink thong and clear pink platform heels.  Her fat tits bouncing with every step as she came over.  She wrapped an arm around the snow skinned woman’s waist and Kaguya leaned on her a bit.

“Come on, let’s get you a shower and something to drink.” she said.  Kaguya nodded, “You did great” Sakura said, “but I would have held out against two more sets easy.” she added proudly.

“Oh really, I recall Ino telling me you barely went a minute between Naruto and the Raikage.” Kaguya said with a smirk, and then giggled as she saw the vein throbbing on the girl broad forehead.

“Ino-butaaaa…” Sakura fumed.  “Well, I’d already went my round with Sasuke and…” she began, but stopped when Kaguya gave her a doubtful expression.

“Fine!” Sakura said, pulling away and running back to the DJ booth.  “Hang on folks we’re not done yet, who’s up for a bonus round!!??  Inari, Darui, if you can take me down I’ll double your V.I.P. statuses!”

There’s a good transition for when Sakura’s image of this is done.

You got the idea! lol