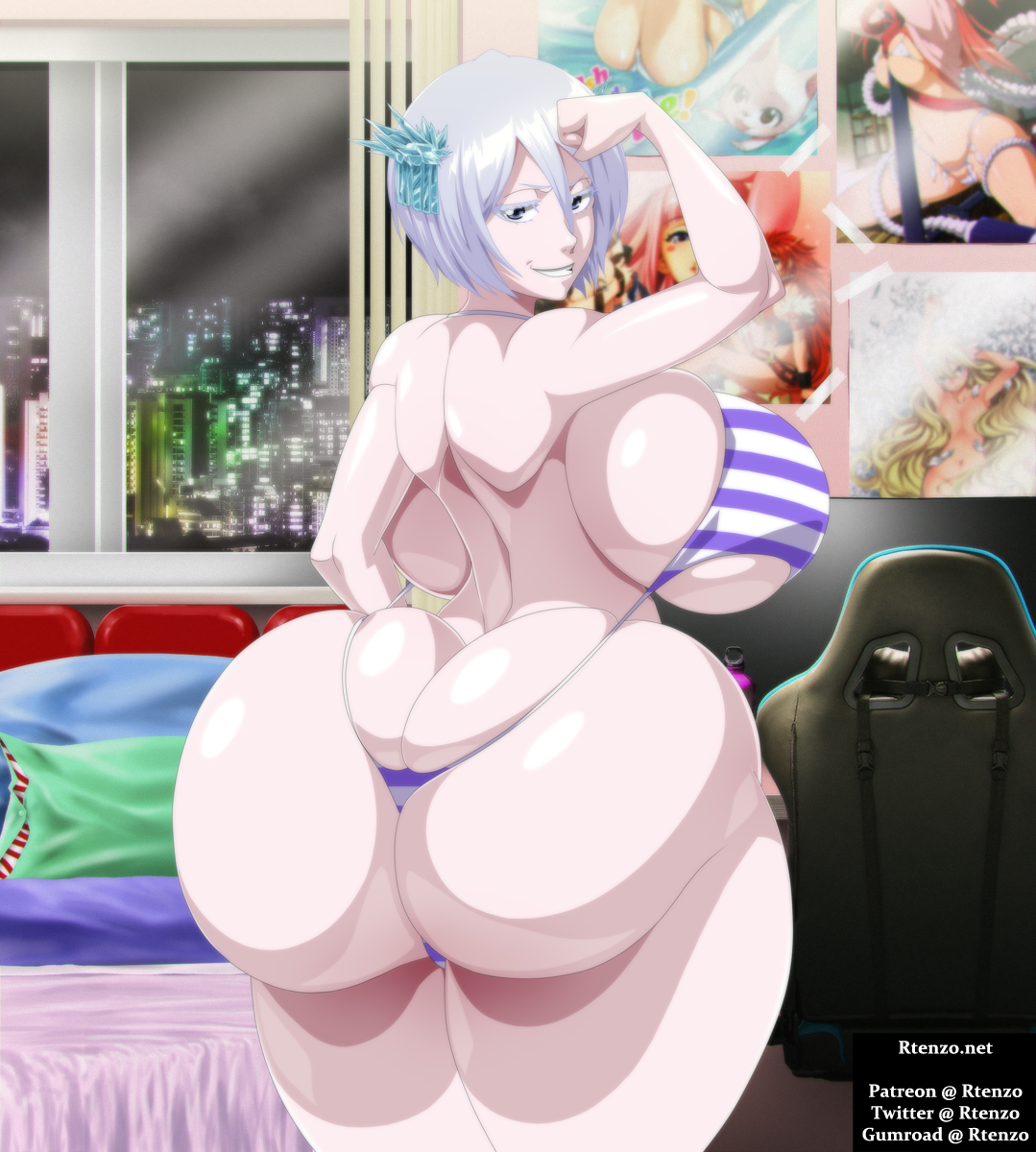 “Why did you want to meet me in my room, Auntie-chan?” Kazui asked curiously from his seat at his desk. “Oh, and Mom wanted me to ask if you were feeling better; she was a little worried about you.”

Rukia, about to launch into her explanation, froze. “You…you told your parents about what we did?!?!?!?!” ‘And about what you did to me!??!‘ she mentally screamed.

Tilting his head briefly to one side, Kazui nodded. “Uh huh. Like I said, Mom was worried about you, though she didn’t say why, and Dad was laughing really hard.” He shrugged, still not sure why his Dad had thought it was so hilarious.

Then Kazui blinked as he looked at Rukia. “Auntie-chan? Are you okay? You have a really weird expression on your face, and your left eye is twitching a lot.”

Taking a deep, deep breath, Rukia managed to calm herself. She was going to have to have a long, serious talk with Orihime and Ichigo later, especially Ichigo; if she could prevent news of her humiliation from spreading the rest of their friends, she would do everything in her power to do so.

“I’m fine, Kazui-chan. I was just remembering something,” Rukia replied, managing a smile that turned into a smirk as she recalled her plans for tonight. “And I asked you to meet me here so we could have a rematch.”

Kazui’s eyes lit up. “Oh! That would be fun! Last time felt really good, and I know you enjoyed it a lot too.” He smiled at Rukia, who smiled back through gritted teeth.

“It was certainly…something,” Rukia agreed, firmly suppressing a blush. “But I wanted to show you something different this time.” Untying her robes, she let them drop to the floor, showing off the skimpy purple and white bikini she was wearing under them.

Then, after taking a moment to center herself, she whispered, “….Bankai.”

For a moment, there was absolute silence.

Then Kazui’s eyes went wide as a huge wave of Reiatsu rolled over him, bringing with it the suppressing cold. No, not just cold; this was absolute zero, power that reduces everything immediately into ice.

As the fog of cold dissipated, Kazui’s watched in awe. Rukia’s hair has now turned snow white, and she stood straighter, an air of confidence and majesty about her. It was as if she had become a queen, queen of ice and snow, where all bowed before her. It demanded worship and praise…

Rukia then smirked over her shoulder at him, showing off her big round ass in the tiny bikini as she gave it a little wiggle. Kazui’s sense of awe faded and he grinned back; he could feel his cock start to grow as his arousal spiked.

Now overflowing with power, Rukia was feeling a lot more confident. Turning back around, she strutted towards Kazui, her breasts bouncing in her bikini top, almost popping out. She leaned over and kissed him hard, tits pressing against his chest as she stripped him of his clothes.

Kazui yelped lightly; Rukia was cold! But he quickly found it was a perfect complement to the rising heat of his body and relaxed, kissing her back. Cupping her big butt, he squeezed it hard before peeling the bikini bottom off of her.

“Mmmm,” Rukia moaned, feeling her breasts swell and her nipples harden. Her pussy was already dripping wet, and she could feel Kazui’s dick growing. Breaking off the kiss, she slid down his body, wrapping her mammaries around his cock. Without hesitation, she starting sucking him off, knowing that this time, their fucking would be different.

“Ahhhh!” Kazui gasped, closing his eyes as he grabbed hold of Rukia’s tits, his fingers sinking deep into them. Her mouth was somehow hot and cold at the same time, sending shiver down his erection and down his spine. “Auntie-chan, that feels great!”

Grinning around the cock in her mouth, Rukia licked and sucked with abandon, rubbing her tits up and down the length of Kazui’s growing dick, her saliva running down it. When she judged it was hard enough, and just as big as it was last time they fucked, she jumped to her feet.

Kazui was briefly disappointed when the paizuri stopped. Only briefly, because Rukia immediately straddled him before slamming her pussy down onto his cock, taking it all at once. “OHHHHH!” he shouted in excitement, burying his face between Rukia’s breasts. Wrapping his arms around her, he pulled her even closer as he started to bounce her up and down, pumping his cock in and out of her.

‘Yes! It’s working! It’s still really intense, but I can handle it!‘ Rukia thought ecstatically, running her fingers through Kazui’s hair as they bounced and writhed against each other. She moaned loudly, feeling an orgasm rapidly building.

Pulling his head back just enough, Kazui playfully bit and sucked on Rukia’s nipples, making her squeal in delight. He was so happy she was having such a great time; he felt wonderful too! Shifting into a higher gear, he grabbed Rukia by the thighs, really pumping her.

“AH! MMM! OOH! YESSS!!” Rukia screamed as she came, throwing back her head in wild abandon, her snow white strands of hair whipping wildly around. This felt even better than last time, because this time, she wasn’t being fucked out of her mind and could really remember it and enjoy it!

Kazui came at the same time, yelling into Rukia’s boobs as he did. They sat there for a moment, bodies quivering as they slowly relaxed.

And realized they both wanted more.
Their eyes met and they both smiled; Rukia lifted her body just enough for Kazui to reposition his cock. The pair groaned in unison as his cock slowly slid into her ass.

“Can I try something that will make this even better? It’s something Urahara-san taught me.”

Now Rukia’s interest was definitely peaked. What had that eccentric, perverted genius taught Kazui? “Sure, go ahead.”

Rukia is such a favorite of mine here on the site. I’m glad there’s been stories/pics of her back to back. And she is absolutely KILLING IT in that bikini with her Bankai.

Gotta love Kazui/ You never know what he’ll do next. Rukia goes sub zero? Kazui proudly brings out bankai and proceeds to ruin Rukia’s ass. Ichigo taking this in stride and laughing about it was even better.

Greatest follow up so far
Great job with the work👌

Talk about a quick follow up. Kazui and Rukia Round 2! This time with Bankai being used.

Nice to see Rukia taking control for much of this chapter while in Bankai mode, well until the end when Kazui took over with his own Bankai use. Nice job, Urahara. XD Not only that, looks like Orihime and Ichigo are in deep shit. Ichigo more so. LMAO! XD

The sex itself was surprisingly better than the last chapter too. Very well done. But the best thing here is the picture itself. Very nice. Overall, very nice work.

Looking forward to seeing what’s next. 😀

Ya I think this one turned out more enjoyable. This piece was especially fun to do, I love drawing Rukia in general

Happy you like it, especially the Rukia bankai details and how it made her body more thicc lol

What a gorgeus sight, Rukia is truly top tier and this picture successfully captures it, the story is amazing and it’s only the second chapter with Kazui I think, (still wish this was ichigo and rukia fucking each other’s brains out but it’s kinda close enough to ichiruki haha) knocked it out of the park once again dudes, keep it up !!

Rukia is one of my fav characters to draw so theres extra energy puit into this pic! Happy you enjoyed the story and pic man, thanks for commenting