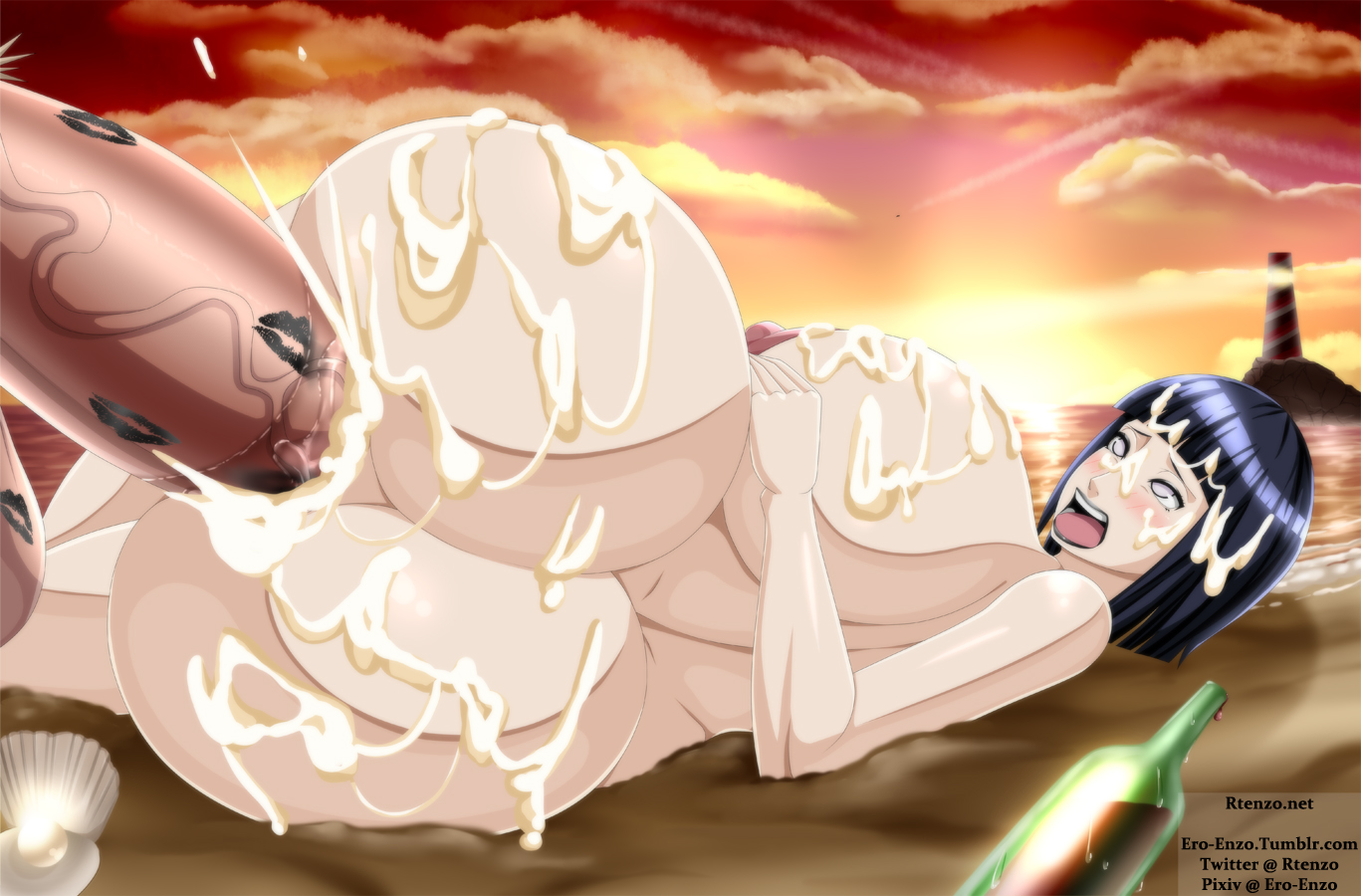 “The Great Naruto Bridge, eh?” A reflected aloud as he and Hinata stood at the entrance of said bridge. “Already making a legend out of yourself before you even took the chunin exams.” Hinata gave a warm smile while observing the monument made in her husband’s honor. Reminiscing about Naruto’s past accomplishments always made her feel good, knowing the hardships he had to go through to reach where he was now.

The retired Raikage had business in the Land of Waves and wanted to see how the Busteez Franchise was doing out there compared to Konoha. A decided to bring Hinata with him as his “personal attendant” for the two days he was visiting there, costing him two of his three remaining VIP tickets. Her current attire consisted of a skimpy, black crop top tied together by red strings, a matching black mini skirt, and golden high heels. While her top did well to cover her nipples, the rest of her well-rounded breast meat and her stomach was on full display. The sultry mini skirt miraculously covering her panty-less pussy was about as thick as the sashes used to tie a kimono, which in turned left most of her tasty buttcheeks out in the open. Lastly, Hinata chose to put on black makeup for the occasion. Combined with her new haircut, she almost looked like a goth.

A told Hinata to wear something “fitting of a depraved nympho” and gave her the choice to decide her outfit. However, he warned her that if it wasn’t to his liking he’d have her walking around in nothing for the whole trip. Luckily Hinata remembered an old costume she wore for a failed attempt at a Busteez movie. She was greeted with an impressed chuckle from A when they met up at the train station, earning his approval.

“Haha, yeah. I remember Naruto like it was yesterday.” A turned around to find the source of the youthful, masculine voice responding to his earlier statement. A young man with tanned skinned walked up in between the Raikage and his temporary mistress, addressing himself as Inari. “Gato and his thugs terrorized everyone back then. But Naruto and his team put a stop to that! Seeing him fight finally made me grow out of blaming everything around me for the way things were and start making changes myself if I wanted things to be different.”

“An interesting story young man.” A replied sincerely to the inspiring tale. He could almost feel Hinata blushing next to him. Inari chuckled and wished the two a good day before heading off in the opposite direction. “I wonder how the kid would react to knowing his hero’s wife was out being a skanky cumdump for another man.” A wrapped his arm over Hinata’s waist and stealthily slipped his hand into her skirt.

“Hieeek!” Hinata squealed like a pig as A rubbed her clit between his middle and ring fingers. “Why d-does it always feel so GOOOOOD!!?” Her voice raised along with the carnal sensations she was experiencing. It felt like tiny sparks of electricity zapped her soaking wet cunt each time A rolled her sensitive clitoris in his fingers. Hinata would’ve fallen to the ground had she not grabbed on to A’s arm with both hands.

“Why don’t we go for a walk, princess?” A suggested deviously as he saw the dick-hungry look on Hinata’s face. “There’s a certain place I wanted to check out. If you can make it over there without almost falling over like you just did, I’ll treat you to a new trick I’ve been saving.”

To say that Hinata was struggling was a complete understatement. As she and A walked down a vacant forest trail, he continued toying with her pussy. “HYAHH, w-wait!!” She cried, halting in place and leaning on his arm for the third time since they made it through the Great Naruto Bridge. A growled with satisfaction as he could feel her warm, pillow-soft tits sandwiching his arm even through the fabric of her top.

“WHAT?!!” Hinata roared out, flabbergasted by the mind-shattering heat building between her legs. No amount of penetrative sex had ever given her the pleasure she was feeling right now! As both of her erogenous zones were being stimulated at the same time, Hinata’s plump, creamy thighs clasped around A’s hand to ensure he never ceased the thorough sexual massage. “OHHH MY GODDDD JUST FUCK ME ALREADYYYY!!” She dropped to her knees and cried fountains out of her rolled-back eyes. This divine, unreal orgasm hit a place in Hinata’s mind and shattered it upon impact. Her saturated cunt was a squirting mess for a solid minute!

“Lovely.” A commented after Hinata’s violent pussy spasms ended, patting her on the head. “Now what was it that you asked of me? I think if you request it in a more…fitting manner, you might get it.”

“Fufufufu…” Hinata chuckled like a deranged madwoman while turning around on her knees. She rose up on weak, trembling legs with the hungriest smile A had ever seen on any woman’s face. “A-sama…” Hinata spoke softly to the sexually dominant alpha male above her and licked up his well sculpted abs. The sheer passion in Hinata’s eyes as she reached the center of A’s strong chest was enough to get his dick thrashing around uncontrollably in his pants! Now standing, she pulled her face away and looked him in the eyes. “Ahhhhhh!” Hinata moaned to A with her mouth still open.

“You kinky little…” He said, slightly annoyed by how turned on Hinata could make him as much as he wouldn’t admit it. The gothic-looking slut of a mother groaned happily as A held the back of her head and covered her mouth with his own. Their tongues wriggled around each other obsessively, trying to taste as much of the other that they could. Audible lip smacking filled the empty forest as they made out. The spit cultivated from this tongue-twisting game dripped down their chins when Hinata ended the sensual french kissing. A felt her hand digging into the waistband of his pants until her delicate fingers cupped his testicles.

“I want you to empty these giant balls in my ass and make me clean them up after.” Hinata requested, deeply drunk in lust while cradling A’s humid nutsack in her hand.

“Heh, fine. Don’t blame me if you can’t get your holes to stop gaping after these next two days.” He warned. Hinata grinned devilishly back at him in response.

A relaxed his naked body on the towel he laid out on the sand, arms crossed over his head as Hinata serviced his engorged prick with her breasts. It turns out the area he wanted to visit was a nude beach suggested to him some time ago by Mei Terumi, the former Mizukage. Him and Hinata arrived there by a small boat he had reserved ahead of time. In it was the beach towel and a bottle of sake. Hinata was surprised by the fact that he wasn’t going for any public humiliation this time as the area they stopped at was secluded. It was almost romantic in its own way, but she knew there would be no true love making from him on that beach.

“OOOMM, SHO PHAT AND TASTY!” Hinata slobbered on the top five inches of A’s dick while she jacked off the rest with her busty titties. Her tongue licked underneath his tender cockhead’s ridges, earning her pleasured, toe-curling groans from A. “Dushh it feel guud, A-shawma?” She inquired before popping the veiny beast out her mouth.

“Indeed it does, but I’d feel even better if those bitch-tits of yours sandwiched my cock more tightly.” He commented and grabbed both of her doughy boobs. “Keep that mouth open wide.” A squeezed both of Hinata’s dick warmers together around his member and thrusted upwards, fucking her throat with ease.

“WAIT!” She exclaimed. “Not in my mouth. At least…not my upper one.” Hinata leaned back and spread her moist cunt lips out to A, inviting him in. “You teased my clit so much that it hasn’t calmed down since I dropped to my knees in the forest. So please…dig into my womb your massive cockhead and shoot the first load inside as deep as you can!”

“HARDER, HARDER!! YESSSS, FUCKING BREAK MEEEE!!” Hinata howled as A destroyed her huge ass. Two hours of nonstop sex had passed since she asked him to bust the first of many nuts that day into her pussy. A came four times in total, twice in her pussy and twice in her asshole.

“I warned you that none your holes would stop gaping after these two days. I intend to keep my word!!” He responded before pulling Hinata deeper into his thrusts, making her squeal in utter ecstasy. This was going to be a long, blissful two days, but an even longer boat ride.

As she sat on the train back to Konoha, Hinata couldn’t help but remark to herself how her whole body felt sore everywhere in the best way possible. A was almost fucking her every second for the last two days. In the shower, in hidden alleys, even when she passed out! He ravaged her with Suzuka Sexcraft techniques he was saving and sexual positions she had never even knew were possible. It was an amazing release, suffice to say.

“Train 69, we are now in Konoha.” The train driver said over the loudspeaker.

“Well, I’ve used enough of my time on you for now.” A said to her as the train stopped. “But don’t forget, I still have one last ticket. And next time, I’ll truly teach you a lesson you’ll NEVER forget!”