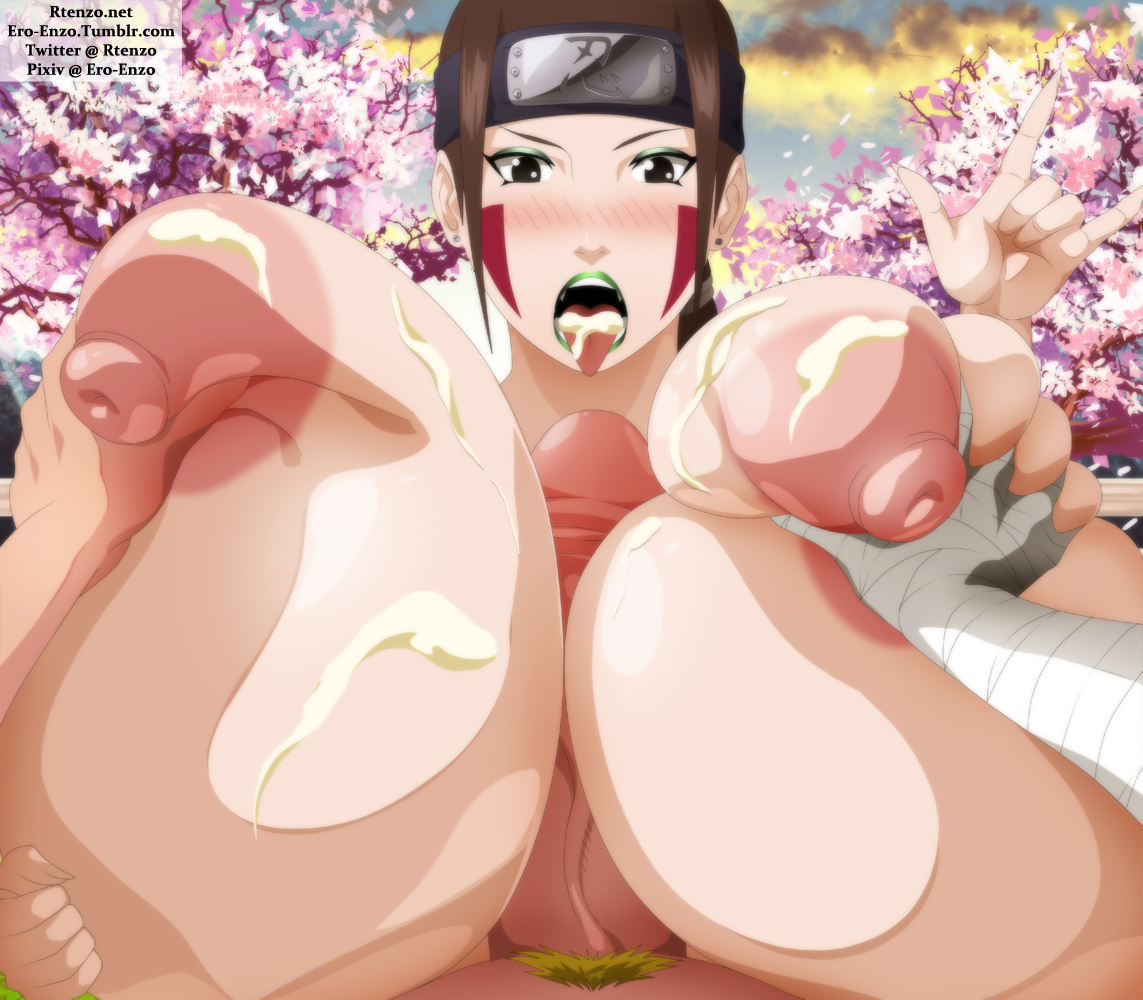 “Ohhhooo, that feels great dattebayo…” he groaned softly, rather enjoying the feel of an inexperienced mouth sliding up and down his length.

“MMMMPH… MMMMPH… MMMMPH… Shank ‘ou ‘ord sheventh…” Hana slurred around his cock, her green painted lips moving with less effort now as she began getting used to his girth.

“You’re welcome, don’t neglect my balls though…” he said with another groan, then watched as Hana lifted her head free and knelt lower, brushing her tongue against his balls hesitantly at first, then more confidently, slobbering all over them as he nodded to her. “I was surprised to hear you’d applied to work here, and then more so when you said you wanted to go straight into private bookings.”

“If I had a ryo for… Wait, you don’t actually go into heat do you?” he asked with his trademark narrowed eye expression, then instantly regretted it when she lightly bit him on purpose.

“No, of course not!” she answered, her voice slightly nervous for some odd reason, “Don’t be silly…” Then, her voice thick with arousal, she said, “But this smell… AHHH! I’m so wet right now… AHHHMMMMPH!! MMMMPH!!! MMMMPH!!! MMMMPH!!!” She opened her mouth wide, ropes of drool hanging from her lips as she took his length between them again.

“So,” he asked, “How many partners have you had?” It was a standard question for all the new girls; this was after all an interview.

“Phree…” she slurred around his cock, her words making bubbles in her saliva as she drooled heavily around his thickness. She then held up a hand with three fingers extended.

“And, how big of a cock do you prefer?” he asked next.

“MMMMMAHHHH!!!” Hana gasped, pulling her mouth off his cock again, panting softly, “You mean there’s bigger than this?” she asked as she stroked his length with one hand, her drool making for a perfect lube.

He chuckled, “The Raikage and Bee maybe, but I don’t know if anyone else is bigger.”

Hana smiled and licked his cock from base to tip again, slobbering all over him before engulfing his length again and speaking, “Dis ish guud den…” she slurred as she began bobbing her head up and down once more, moaning in arousal.

Naruto went through a few more questions; what wasn’t she willing to do, how many partners at once, things of that nature. When he asked about her partner limit she lifted her mouth free again, “MMMMHH!! do you mean how many guys could I get at once?”

“I believe the record was when Hinata-chan took five men at once, that got her something of a nickname ‘Queen of Lust’.” he answered, though his wife hated being called that, not wanting to be known for dominating the Seven Deadly Sins.

Naruto nodded and leaned his head back, enjoying the feel of her warm, wet, mouth as he looked around the newly refurbished V.I.P. room. The walls were painted with a perfect outdoor mural showing the cherry trees in full bloom. The rug was a grass green that went well with the walls, even the air smelled of cherry blossoms thanks to a special filter placed over the air purifier. He figured the room would make a perfect setting for Hana’s ‘interview’. Normally, Kakashi would be doing this, but lately he’d been less and less interested in directly working with the girls and more focused on the scheduling and other logistic work for the club.

She’d already gotten his attention with how she’d learned to do the body altering trick, likely picked it up from Sakura who was teaching it to all the girls. She’d also earned his direct interest thanks to a minor incident when she came to the club to inquire about a job. She’d spoken with one of the bartenders, Naruto couldn’t recall the name, and he’d rudely told her that the club didn’t do bestiality shows when she gave her name. That had gotten the unfortunate man hurled against the wall behind the bar, shattering several expensive bottles of high end liquor.

No doubt he deserved the cuts and bruises, but Hana insisted that she’d pay for the alcohol out of her first few weeks’ salary. As he watched her working hard to take his entire length again, Naruto smiled and decided to take it out of the Bartenders pay for his rudeness, that is, after he came off workman’s comp.

“Mmmmmh, that’s it…” he groaned as he felt his first climax building up, “Go faster…” he told her. Hana moaned and nodded, bobbing her head up and down again and again, her lips making such delicious slurping sounds as the moved back and forth along his length.

“Mmmmmmh, sheventh-shama, pwease, let’sh have shex now, muh pusshy… ahhhnnn, muh pusshy is on phire…” she begged, her hands resting on his knees as she looked up at him. He suppressed a chuckle at the sight of her squatting in front of him like a dog begging for a treat.

She then stood and Naruto completely expected her to kneel down on all fours in front of him, her ass in the air. So he was more than a little surprised when she quickly straddled his lap, rubbing her hot, sopping wet pussy along the length of his still fully erect cock.

“I like this position best.” she told him, her left hand resting on his shoulder while she used her right to guide his length inside her with a wet squishing sound. Naruto groaned at the feel of her pussy, so tight, yet, soft, hot, and so very wet, even his length slipped inside her with ease.

“OOOOHHHH YES!!!! FUCK ME LORD SEVENTH!!!! AHHHH!!!! SO BIIIGGGG!!! FUCK MY BITCH PUSSY!!!!” Hana moaned, panting for every breath as her tongue hung from her lips. She then began rolling her hips faster, so fast Naruto had to grab her hips just to keep them both steady and in the chair. “HAAAHH!!!! AHHHHHH!!!! HAAAA!!! AAAAWWWWOOOOOOOOOOOOOOOOOO!!!!!!” Hana howled as her pussy gushed around him.

“Haah…haah…haah…” she panted softly as Naruto held her for a few moments, “So, do I… Get, the job?” she asked.

“One last question,” Naruto, covered in sweat, asked with heavy breath, “Are you okay with incest?”

Naruto winced as Hana sat up straight on his lap, his cock still inside her as her whole body tensed, clenching his cock painfully, “What?!?” she asked in shock, her eyes wide.

“Kiba is a bit of a regular, and there’s a chance you might get booked with him since we often don’t list client names on the duty sheet.” he explained.

“I, uh… I mean…” Hana stammered, her face turning redder by the second, if it got any redder, the crimson tattooes on her cheeks might vanish completely. She shifted on top of him nervously, making his cock stir around inside her again and drawing another moan from her lips.

Naruto laughed, “Just kidding, every girl has the right to refuse servicing a client for any reason.”

She gave him a dour look and punched his shoulder, “Lord Seventh!! How cruel!”

“You’re hired.” Naruto told her with a smile.