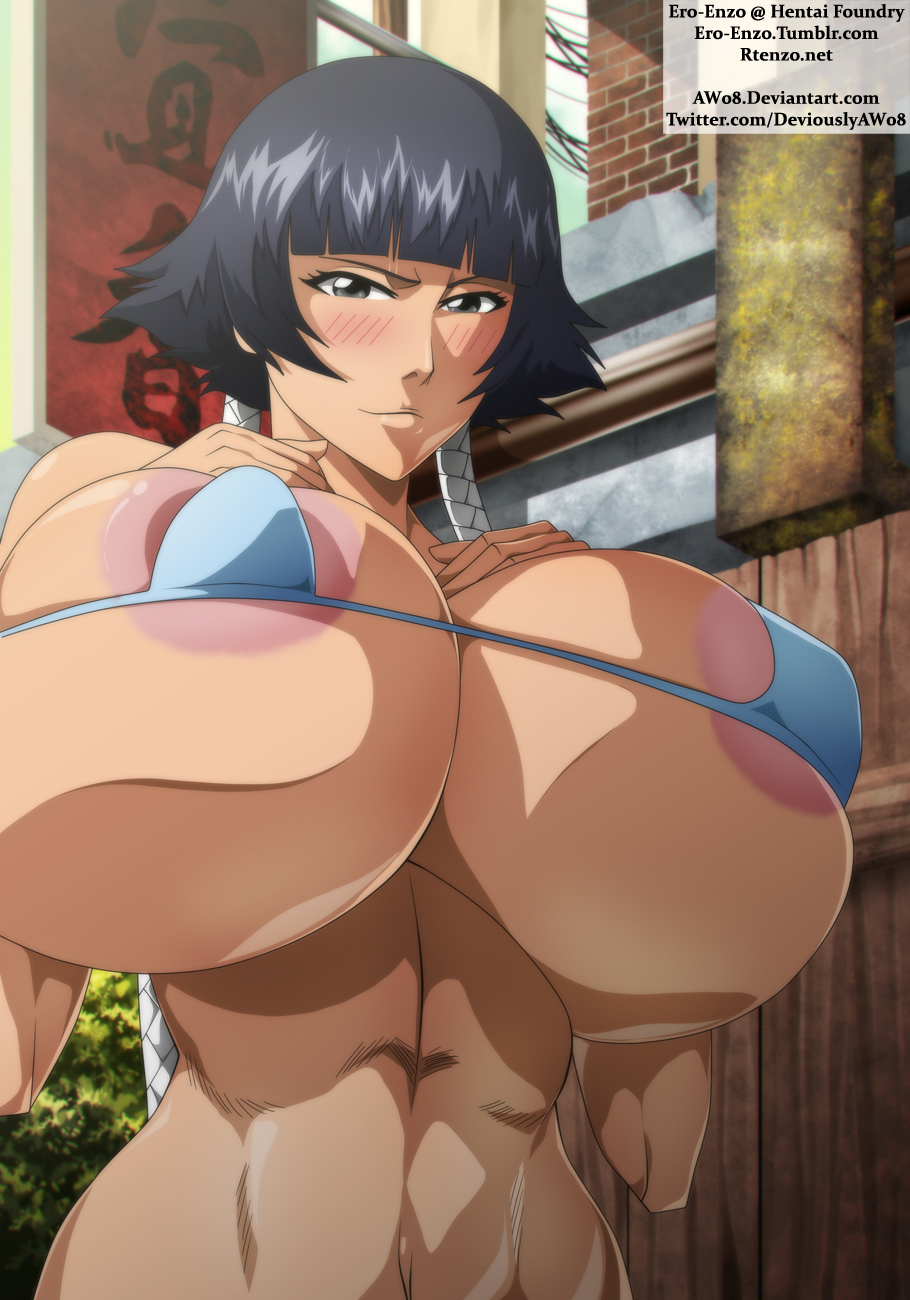 Today had been very draining for Yushiro. Another one of his sister’s mischievous schemes ended in him getting milked dry. He couldn’t exactly complain, though. Although he didn’t seem to be a pervert at first glance, he’d been wanting to do something like that with Sui-Feng for a long time. He drifted off into sleep with a smile on his face, dreams filled with recollections of his fun at the beach. Meanwhile, in the streets outside of the Shihoin manor, Sui-Feng approached the window with a very skimpy bikini on. Her nipples were barely covered by the top, and her giant rear wasn’t covered in the slightest by that pitifully small bikini bottom. Her face was one of lust, obviously having a very clear idea of what she wanted to do with the sleeping prince.

This made the young man jut up from his sleep and look around fearfully. His suspicion was calmed once he felt two soft mounds rubbing against his cock from both sides. Looking down, he saw that the breasts trapping his dick belonged to Sui-Feng, who was glaring at him with powerful desire in her eyes. Is this really the same girl from yesterday?

“Isn’t it obvious?” Sui-Feng circled his tip with her tongue before retracting it so she could speak. “I want some alone time with you, after Yoruichi-sama didn’t let me finish!”

“Really? So soon? You looked pretty banged up…” One glance at her would tell you that she doesn’t care in the slightest how banged up she gets. In fact, she seems to be aiming to get banged up, with how she cupped his balls while lathering his tip with saliva, moving her tongue down to the base and back up. Yushiro gripped the sheets of the bed and closed his eyes as to focus his breathing and not lose so quickly. She was really talented in this area, he didn’t even consider using her mouth yesterday.

Her only response to this was gurgles and moans, spit dripping down her chin and his dick. The bed was starting to get soaked underneath them. Sui-Feng’s hands grabbed the cock and stroked it the best she could, of course being too wide to get a hand around. Whatever wasn’t violating her poor throat was getting a handjob along with some nice paizuri to ensure that not one inch of him remains unsatisfied. Not only did this feel great for her, but her loyalty to the Shihoin family meant a good deal of her pleasure came from the idea of pleasuring their young master like this. His moaning and groaning turned her on immensely, the idea of fucking Yoruichi’s younger brother, the thought of being the barer of his children and carrying on the family…

“MMMGHFF!!!” While she was thinking, Yushiro had gone ahead and made the decision to slam it all in. A sharp pain shot through her entire body as his cock speared her gut and pushed aside anything that was in his way to fuck her thoroughly. The dark-skinned stallion had moved her breasts out of the way so that she could take it all in her mouth, but he still toyed with her nipples and squished those big jugs playfully. “Oh, shit!~ I won’t be able to..!”

Sliding his dripping wet shaft out from between her lips, he dropped it on her face as he waited for her mind to stop being scrambled so they could continue. Yushiro’s meat became softer for a moment, but it quickly stiffened up after a minute or so of using Sui-Feng’s cum-covered face as a stool. He grabbed her arms and brought her up beside him on the bed, the place where he usually slept, but this time the bed was being used for something a bit naughtier. “Are you okay? Did I go too hard again?”

“Unh… N-No… You’re nowhere near done, are you? Come on, stud.~” Sui-Feng moved her arms to wrap around him and pull him closer until his prick was stuffed between her thighs and his face was muffled by her titties. She immediately seemed to get her energy back, wanting to service him until he’s fully satisfied. Yushiro seemed to plan just that, rolling onto his back and pulling her up. She sat on his cock and rubbed her leaking pussy lips against it. The boy gnawed on his lower lip while he stared up at those huge breasts hanging above him. This woman was so blessed when it came to her body. She was made for serving him.

Yushiro was surprised by how much she could take, but then again, at the beach he did kind of shove it all in himself. Maybe he should apologize, but right now it seemed she had no issues. The opposite, in fact. Her face was nothing like her at all. None of the sternness she showed her platoon, none of the bashfulness she showed him and his sister. She was only in this for pleasure, and she was receiving a ton of that. More than she knew what to do with. She continued to shake her ass on his manhood in an attempt to pleasure him. Not that she needed to try, just her tightness was enough to grant him bliss.

Once Sui-Feng was low enough on his rod, he grabbed her sides and pushed her down even more. A sharp pain shot through the girl’s body, but she endured. The ecstasy of being used for Yushiro-sama’s release was way more powerful anyway. Being stretched open the other day had made this time much easier on her, but that didn’t stop the fact that he was far too big to be doing this. It’s as if she were made to serve him and his clan. The two fucked and fucked for hours, the room being filled with moans, love juices and steam before long.

Outside, Yoruichi would find herself returning from a trip to the Human World with bags full of human goodies. She was stopped in her tracks and almost dropped her things upon hearing an ear-piercing “FUCK ME!~” coming from the manor. That voice was unmistakable. What the hell does Sui-Feng think she’s doing spending time alone with Yushiro-chan? She just huffed and sat on the steps to the door, waiting for them to be done.

…She would end up waiting a long time.