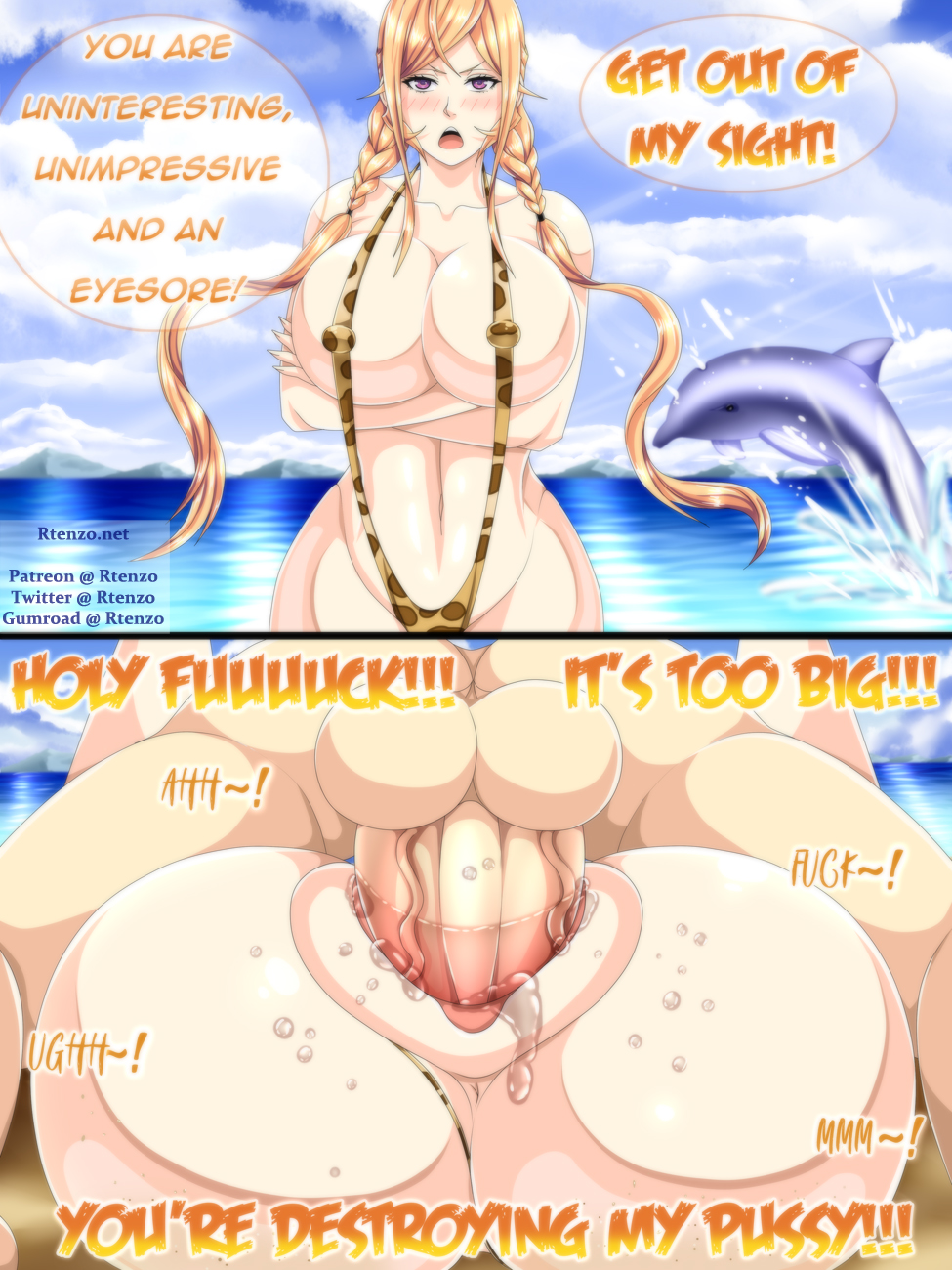 Erina stomped down the beach; the scowl on her pretty face and the glare in her purple eyes were enough to deter all but the most hormone addled admirers. Those that didn’t get the hint were quickly sent packing by her harsh words.

Thankfully, the beach was almost deserted. Erina didn’t know why there were so few people, but she didn’t care; her mood was bad enough as it was.

“That damn exhibitionist!” she growled, kicking at the sand and trying to ignore how her breasts and ass jiggled wildly for several seconds. “I should have known better than to let someone who wears a bikini top every day pick out my swimsuit!”

Naturally, Erina had kicked up a huge fuss when Ikumi had presented her with the bikini she had ‘graciously’ decided to buy for her. But she had been outnumbered, with Ikumi, Alice, and even Megumi had all conspired and worked together to ‘convince’ her to wear it.

So here Erina was, unable to enjoy the beautiful weather and gorgeous beach because she was too busy fuming over her humiliating bathing suit. At least she had gotten away from the rest of the group, though her mood hadn’t improved.

Fortunately, a distraction chose that moment to make himself known.

“Yo, Erina! Love the bathing suit! Let me guess, Ikumi picked it out for you?”

Stiffening, Erina slowly turned around, glaring at Soma’s stupidly smiling face, feeling her face turning red from mingled embarrassment and anger at being seen dressed like this. It was that combination of feelings, plus her lingering feelings of frustrations with Soma in particular, that lead to what she said to him, the words dripping with disdain.

“You are uninteresting, unimpressive, and an eyesore! GET OUT OF MY SIGHT!”

Soma stopped, blinked, and stared at Erina, his jaw hanging open slightly. Knowing she had gone too far, yet too proud and stubborn to take it back, Erina started back at him, jaw set.

Then Soma nodded, suddenly gaining a look of understanding. “Ahh, I see. It’s been one of those days for you; well, don’t worry, I know how to take your mind off of it!”

Erian narrowed her eyes. “What are you blabbering on about nowMPH!?” She squeaked in shock when Soma shot forward to kiss her, wrapping his arms around her body. She could feel her barely covered tits pressing against his bare chest; her ears burned, she was blushing so hard.

Then she squealed into Soma’s mouth when he gave her ass a hard squeeze, his strong, calloused fingers digging into soft mounds. She tried to take a step back, but her legs tangled with his; with a loud “OOMPH,” she fell backwards onto the sand, Soma on top of her.

“Great idea!” Soma enthused, quickly kicking off his swimming trunks. As skimpy as Erina’s bikini was, it had already slipped, exposing both her bare boobs and her pussy. Grabbing hold of her legs, Soma bent them back, until her feet were almost touching Erina’s ears. Already at full erection, he quickly thrust his cock all the way into her.

“HOLY FUUUUCK!!! IT’S TOO BIG!!!” she screamed at the top of her lungs, arching her back and inadvertently pushing her tits into Soma’s face. Then he began to pump it in and out, and sweat promptly broke out over her body. “AHH! UGHH! FUCK~! MMM~!” Her pussy was being spread open and fucked hard; biting her lower lip, she eventually screamed again. “YOU’RE DESTROYING MY PUSSY!!!”

Soma chuckled as he kissed and licked her tits. Erina could be very dramatic at times, and judging from the way her arms had come up and wrapped around his body to claw at his back, she wasn’t hating it in the least, despite what she might be saying. Sucking one of her nipples into his mouth, Soma bit down on it playfully.

“AAH! YOU IDIOT! FUCK!!!” Erina started to yell at him, only to rapidly change her tune when Soma adjusted his hips and started fucking her at a different angle, his dick rubbing against her clitoris. “YES! MORE LIKE THAT!!! KEEP POUNDING ME!!!” she demanded, writhing in the sand and clawing more vigorously at his back.

Soma winced; his ears were very close to her mouth, so they were now ringing from her screams. And her fingernails were very sharp. He wouldn’t be surprised if his back had started bleeding. Still, the pain was very much worth it; he could feel her pussy heating up even more and tightening around his cock in the best possible way. It wouldn’t be long now…

“YES! YES!! YESSSSS!!!” Erina howled, moving with Soma’s dick as he pumped even harder and faster, their hips slapping together in an almost continuous sound. Then she came, screaming like a banshee and writhing wildly on the beach. Sand was getting everywhere, but right now, Erina couldn’t care less.

Despite that, he still smirked at her as he released her legs, letting them fall back onto the sand. “Feeling better?” he teased.

“…shut up,” Erina muttered, looking away with a renewed blush. Then she looked back at him, a tiny smile on her face. “And yes, I am. You’re still an idiot, but…thank you.”

“You’re welcome-WHOA!” Now it was Soma’s turn to find himself on his back, with Erina looming over him with a wicked smile.

“Don’t think you’re going to get off the hook that easily,” she purred, licking her lips. “You’ve got me all hot and bothered now; one fucking isn’t going to cut it, so I hope you’re ready!”

Lowering herself onto his still hard cock, Erina moaned as it pushed into her ass. Grabbing Soma’s hands, she put them on her tits. “C’mon! Grope me, screw me more!”

“…so is this a punishment or a reward?”

Eventually, Erina’s gonna learn to start taking advantage of the fact that mouthing off generally ends with her full of cock

Soma has somethin better to occupy her mouth with 👀

Thank you Combo! 9.5 is still good lol Erina lost this won but maybe she’ll win the next battle

I’m almost 80% sure that I already commented on this one! In case I didn’t, here’s the short version:

Short but oh so well chapter. Erina’s demeanor just because of her bikini is perhaps a bit too over the top but over all, I like her characterization. Her snapping at Soma like that lead to a really short and hot beachside romp. Little bit too short but it was described rather well and I like how candid Erina became after round 1 ended.

Thank you very much for the double Shokugeki no Soma treatment today, especially after the third chapter of Shokugeki no Sanji. Nice coincidence!
7,5/10

Mandela effect again? You living in an alternate timeline! I really like the art style of the author that does Shokugeki no Soma, Its a shame the manga felt rushed to completion tho

Naah XD. Sometimes I simply forget if I wrote a comment on Patreon already or not and since I couldn’t find it, I simply wrote it again. The artwork is easily a 9/10 by the way and the story alone a 7/10.

I was hoping for a story with this picture. Thanks a lot!

Love to see my favorite couple of Erina and Soma having some fun in the beach and the redhead helping the Totsuki princess feel better and with extra pleasure with the sexy bikini. Good teamwork from Ikumi, best girl Alice and Megumi. Looks like Ikumi influence is already seeing its effect on the blue haired girl. Maybe with Soma, Erina can handle better Mana and Alice teasing. Thanks for the amazing art Rtenzo and the good story of S22132

Thank you for the feedback Shadow! we really appreciate it. I’m happy you’re enjoying the Soma storyline. Expect more to come (eventually lol)

Nice to know that more would come. Hope to see Rindo or Hisako (Erina´s assistant) with a bit a bust up as well as her boss she will look sexy with that kind of bikini. And they had a meeting with Alice or Ikumi, they would a bit of change there.

I would love to see a love triangle develop, Erina and Ikumi have both fallen in love with souma and although Erina with her usual tsundere attitude denies it but they both deep down love souma for himself, his big dick, and his cooking which gives them an idea. This my arc idea, they tell souma to use his special cooking to make his dick as big as he can possibly make it because they plan on competing. All three of them will spend a week at a private beach owned by Erina’s family(which Erina rubs in and makes ikumi angry) and they will compete by deciding whoever makes souma cum the most by the end of the week will end up with him and all souma is allowed to wear during this time is leopard print speedo picked out by ikumi(which ikumi rubs in and makes Erina angry) showcasing his new more Ginormous size.

Who would win between Erina and Ikumi?

They would have someone keep track of the score, either it be souma or an outside party but both girls would lose track of the score and by the time the competition is over they both realize that they’re tied which makes them argue who was first and souma tired of they’re constant fighting and that deep down he cares about them both decides he’ll take them both which makes them even angrier but he quickly shuts up. Souma has always been confident but the constant sex over the past few days has made him dominant little by little, not to mention the nonstop fucking which makes great practice has made him better little by little at sex as well, and with his newer more permanent humongous size which was caused by an experimental new recipe that managed to work the way he wanted it to and all these things allow souma to subjugate them thanks to an hours on end threesome which in turn afterwards ends their rivalry and by the time the three of them return to totsuki academy the three of them have obviously changed on the inside, although Erina and Ikumi may seem the same around other people when they’re around Souma they become flustered, nervous, they stutter a bit, and they begin to shake a little which obviously confuses people who see this happen and souma might seem the same but he has become a literal fuck machine and they all still fool around with other people but this doesn’t worry Souma at all because he knows he ‘trained’ the girls so their loyalty, obedience, and love are only for him.