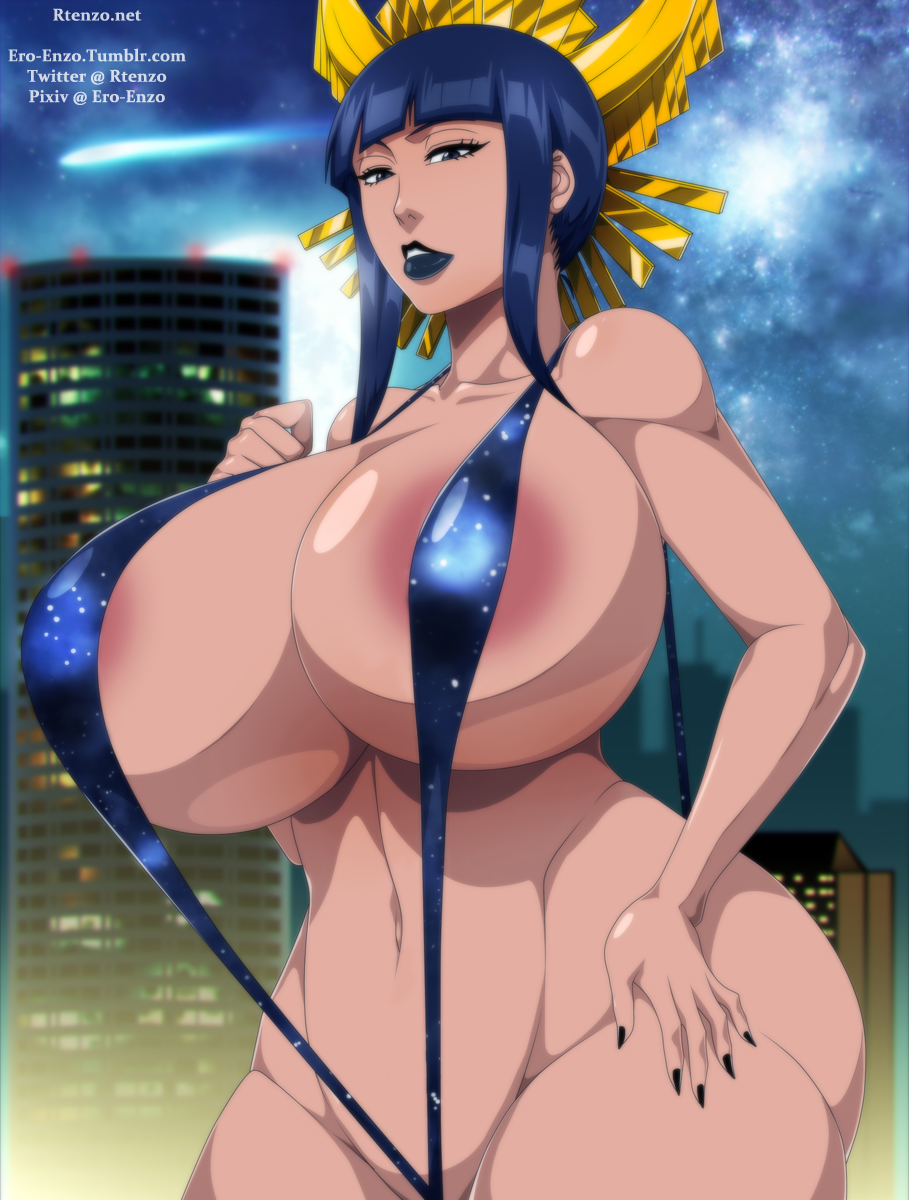 Senjumaru Shutara waited semi-patiently, occasionally glancing out the hotel window at admittedly impressive view. However, most of her attention was on the elevator; she was waiting for someone in particular, and her horniness wasn’t making it easy.

The elevator dinged softly, and her eyes darted towards it, her lips turning upwards into a smile as her target stepped out, slowing his steps when he saw her. Locking onto his swim trunks, Shutara licked her lips, knowing what they concealed.

“Shutara-san, hello,” Yushiro greeted her politely, a glint of curiosity in his golden eyes. “You called me here?”

Shutara struck her best sexy pose, pleased to see the affects on Yushiro: his eyes widened slightly, and a tent formed in his shorts. Good progress, but this was just the beginning.

“You know exactly what I want,” she replied confidently, stalking slowly towards him. To Yushiro’s credit, he stood firm, looking up at her with a single raised eyebrow. “I want you to fuck me, in my room, right now.”

Snorting gently, Shutara waved a dismissive hand. “Please. No matter how big you are, I’m a member of the Zero Squad, the Soul King’s personal guard. I’ll be just fine; you should more concerned about yourself.”

“F-FUCK! OH FUCK! I DON’T KNOW HOW MUCH MORE I CAN TAKE!” Despite her very loud protests, Shutara never stopped bouncing on Yushiro’s massive dick nor did she attempt to stop him from groping her bouncing boobs.

Though that may have been caused by the overload of pleasure she was experiencing. Eyes rolling up into her head, Shutara was barely able to stay conscious. ‘How could this feel so good?!’ This was much more than she was expecting-

“OH GODDDDDDDD!!” she screamed as another orgasm ripped through her. Yushiro giggled as he tweaked her nipples, making her twitch.

“I don’t think you’re handling it as well as you thought,” he pointed out, wincing slightly as Shutara shrieked again. “But hey, maybe that’s a good thing!” he added brightly, pumping his hips faster as he neared his own orgasm. “It’s even better than you expected, right?”

“AAAAAAHHHHHHHH!” was Shutara’s eloquent response, her biggest orgasm yet slamming into her as Yushiro’s dick convulsed, pumping loads of semen into her pussy. She was only vaguely aware of him pulling out of her; it was all she could do to stay upright and conscious.

She did become very awake when Yushiro shoved his cock into her mouth! “ACK?!” she spluttered, jaw forced very wide.

“Clean that off and get me hard again,” he ordered casually, burying one hand in her hair and using it as leverage. His other hand continued playing with her boobs, loving how hard her nipples were compared to the softness of her tits. “And see how much you can take; maybe you can beat the record!”

“AH! HMPH! NNNN! OH!” Shutara gagged and spluttered as best she could. Yushiro’s dick was huge, both very long and very thick. It pinned down her tongue as it slowly pushed deeper and deeper down her throat. She flailed her arms weakly, certain she couldn’t take any more.

“That’s all? Huh, that’s kind of disappointing…maybe you’re out of practice? I mean, you are in the Royal Court all the time. Don’t worry, I’m sure you’ll get better with experience!” Yushiro encouraged her, his cock back at full hardness as he pulled out.

Shutara coughed, her jaw finally back in place. “Don’t…don’t patronize me,” she growled, sitting up, only to squeal as Yushiro took a hold of her and spun her around, pushing her onto her knees and bending her over. “What are you-”

Her eyes bugged out and her jaw dropped as Yushiro slammed his dick into her ass, with no warning! For a frozen moment, she stayed that way, until she found her voice again.

“Damn, it’s so tight!” Yushiro grunted, fighting for every inch. He suddenly wondered, had Shutara ever gotten fucked in the butt? Surely he wasn’t her first time….

Shutara wailed and shrieked, arching her back and pushing back into his cock. It was too much, way too much!

But it felt sooooo amazing at the same time!

The first orgasm hit her out of nowhere, and she screamed, a loud, piercing sound that made Yushiro glad the rooms were soundproofed. Then it was one after the other, like machine-gun fire. Shutara writhed and wiggled like a wildcat, Yushiro’s balls slamming against her pussy, driving her to even greater orgasmic heights.

She must have passed out, because the next thing she knew, she was lying on her stomach, boobs squashed underneath her. It was all she could do to roll her eyes up at Yushiro when he stood up.

“Well, that was pretty fun!” he said cheerfully, looking disgustingly fresh and rested. “Not as good as some other ladies I’ve fucked, but that’s all right; I’m sure you’ll do better next time….um, if you still want to try again, that is. Bye now!”

With a cheerful wave, Yushiro was gone, leaving Shutara with the shattered remnants of her pride…

…and memories of the best sex she’d ever had.

…as soon as she could move again.

Wow, since the last chapter after witnessing Isane act, a new woman (Shutara) wanted a piece of that. And after this chapter, does that mean all the mention ladies from chapter 3 want Yushiro’s huge D?

Yo I’m loving these short bleach stories yushiro was always that werid character we only got to see a little if but can tell he a hyper goofball. I can’t wait to see which girl he gets with next because we hardly get to see the girls from squad 0 nice story S22132 and Rtenzo damn this pic looks sweet as hell

Yeah, we didn’t see much of Yushiro or the Zero Squad, so it’s interesting using them in stories.

Thanks, I’m glad you enjoyed it.

@s22132 Your a boss S22132 ! Loving how my favorite dude Yushiro is hitting with all these ladies ! Especially loving how this is all one continuous storyline. Please keep up the good work !
@Rtenzo Thank You for bringing back Shutara into artwork after so long! Been missing her and even have her in my list of ideas for future requests for ya. You and whoever requested her is a Boss !

Thanks very much, and I’ll do my best.

Hey maybe have Hikifune go at it with Byakuya and get the noble to loosen up.

So Senjumaru Shutara was the latest to try the famous Shihoin dick, only to not last as long as any of the others, but she really did try. That was a disappointing but admirable performance on her part.

At the same time, I can see that Yushiro is starting to get rather overconfident and borderline egotistical about his magnum dong and what he can do with it. He may want to watch his back for anyone else who takes him on with it. XD

Can’t wait to see what’s next, and more importantly, WHO. 😉 Haha. Great work. 🙂

Yep, she tried, but was overconfident.

Pretty good Idk much about the girl but she is hot as hell and she gave it a good try but didn’t last long. Decent update 8/10