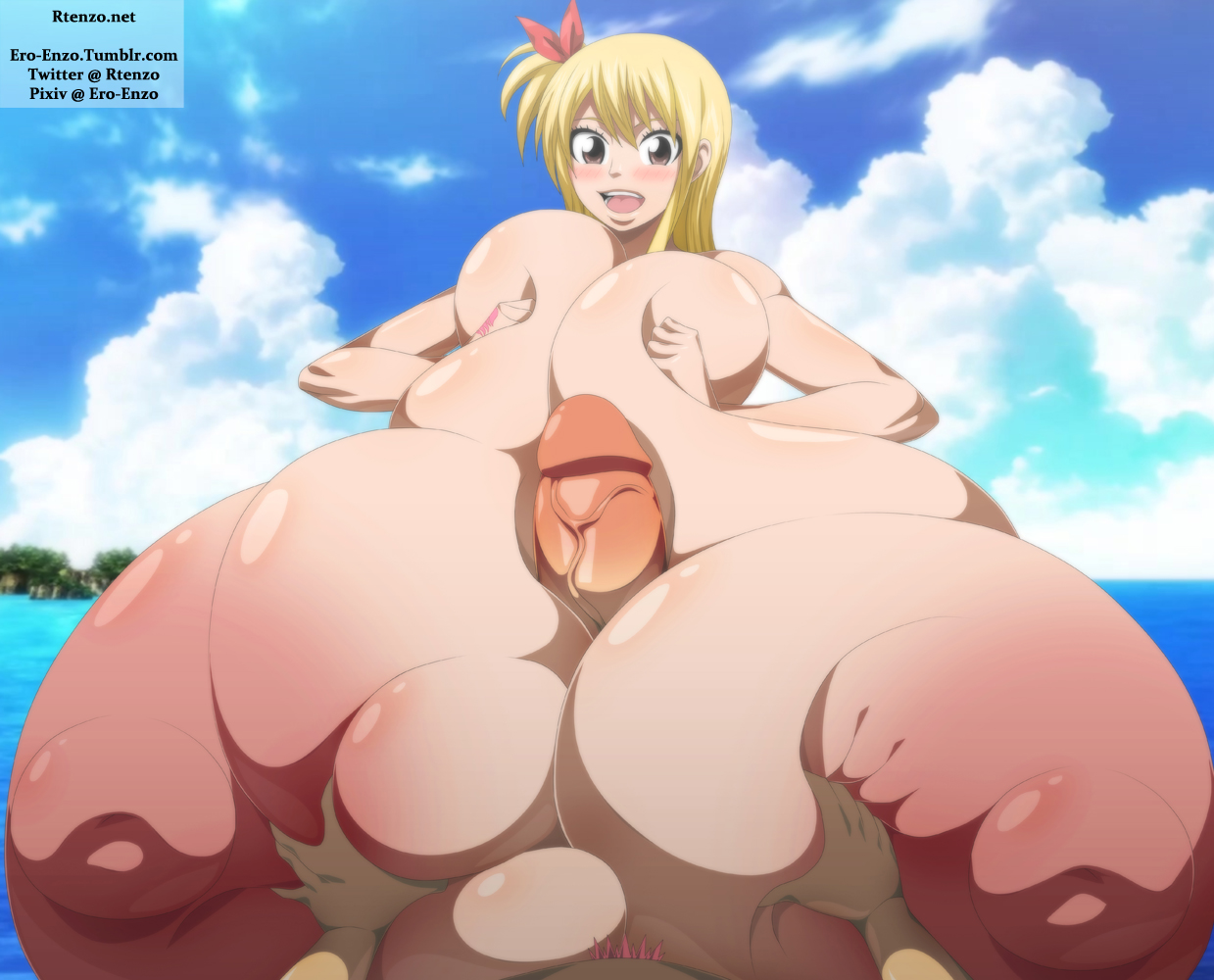 “Oooh, you’re getting so big and hard, Natsu!” Lucy panted, pushing her huge tits up and down the length of her pink-haired partner’s cock. “Are you going to be ready to fuck me soon?” She really hoped so; her pussy was so hot and dripping, it was almost painful. She need a hard drilling, and she needed it as soon as possible.

Natsu chuckled, his voice roughened by lust, as he dug his fingers into Lucy’s soft tits. “Definitely, though I think I’ll start with your ass this time.” His chuckles turned into full-blown laughter at the glare she gave him. “Relax, I’m just kidding; I’ll pound you good and hard in your pussy real soon.” And then he would fuck her ass, it was too amazing to pass up. And she made the best noises when he spanked her.

Her expression brightening, Lucy beamed at him with a wide smile. Something like that, she decided, deserved a reward. Opening her mouth as wide as she could, she bent down, pressing against her own humongous tits to reach Natsu’s cock. She was just within licking distance when-

Whipping their heads around in unison, Lucy and Natsu beheld a group of their closest friends, all staring, and in some cases, laughing at them. Poor Wendy’s face was buried in her hands; what little Lucy could see of her face was bright pink, bordering on red.

At the front of the group, and the one who had spoken, was Gray. Arms folded across his bare chest, he regarded them with mingled exasperation and embarrassment. “Seriously, this is the third time this week! Don’t the two of you have any self-control?”

Natsu didn’t tolerate Gray’s shit talking at the best of times, and the icy bastard interrupting just when things were getting really good was far from the best time. “You’re one to talk, exhibitionist,” he sneered.

“What? AH CRAP, AGAIN!?” Gray did his best to cover himself, while Wendy, who briefly peeked between her fingers, promptly covered her eyes again with a loud squeak as her face turned crimson.

“An exhibitionist with a nymphomaniac girlfriend,” Lucy snarked, adding fuel to the fire. Everyone turned to look at Juvia, then winced. Juvia was clearly very turned on by what they had walked up on; she was rubbing her thighs together and whimpering, her nipples straining against her bikini top.

“I give it five minutes or less before she drags Gray off and bangs his brains out,” Lucy went on confidently. Looking for the next potential source of trouble, her eyes narrowed on Erza, who looked like she was about to speak. “And don’t you start either, Erza. I saw you and Jellal a couple of nights back, out on the pier.”

Erza very abruptly lost any desire to try and lecture her friend, her blush rivalling her hair for a moment.

The sight of the mighty Erza tongue-tied emboldened Natsu, who gave their group of friends a lazy, confident look over. “Anyone else want their potentially embarrassing secrets leaked, or are you guys going to let us get back to it?”

Fairy Tail mages were famous for their determination and courage, but no one there felt like poking that potential hornet’s nest, especially when they were still on vacation. In less then a minute, the group had gone their separate ways, most of them moving at a good power walk speed.

“And that takes care of that,” Natsu said with satisfaction, proud that he hadn’t softened at all. Of course, Lucy was incredibly sexy, so that probably had a lot to do with it.

And speaking of Lucy…

“So, where were we?” the pink-haired dragon slayer asked slyly, grabbing hold of Lucy’s nipples and gently turning them.

“MMmmmm…” the busty blonde moaned in pleasure, giving Natsu a sultry look. “I think I remember; just don’t forget your promise,” she told him, head bending low to get her mouth on his dick.

“Oh, you don’t have to worry about that,” Natsu groaned, not expecting a reply with Lucy’s talented mouth so full and working so hard.

Idly wondering what the others were up to now, Natsu pushed the question aside. Right now, he didn’t really care; all he wanted was an uninterrupted afternoon full of sexual debauchery. He would find out all the gossip and rumors later.

For now, there was a big ass just waiting for him to pound it like a nail, and a hot pussy that needed his cock in a bad way. He hoped Lucy was ready, because he wasn’t going to hold back.