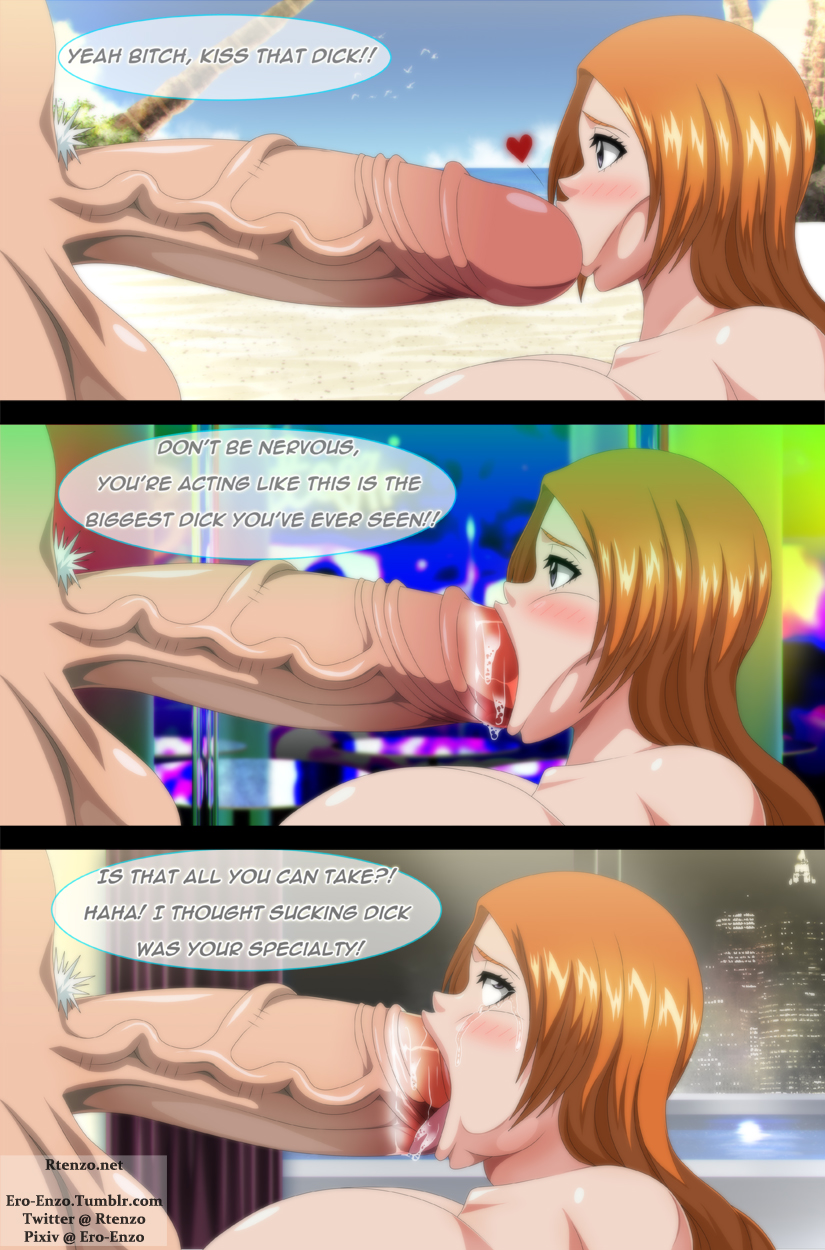 “Yeah bitch, kiss that dick!!” Hitsugaya ordered, grinning madly as Orihime tentatively pressed her lips to the head of his cock. The blush on her face made her look even prettier, and the captain groaned as she began peppering his dick with kisses.

Then she pulled back with a giggle. “Wow, Hitsugaya-san, you’re really good at this! You sounded so natural!”

“Ah…thank you, Inoue-san,” Hitsugaya replied, deciding to take the compliment as it was intended. “I have to admit, this is more fun than I thought it would be. Normally, I would never talk to a woman like that, but-”

“But it’s fun to cut loose and act out every once in while,” Orhime finished knowingly, smiling brightly. “I understand, Hitsugaya-san, and you don’t have to worry about hurting my feelings; I know that you’re just playing.”

Hitsugaya sighed in relief, a weight coming off his shoulders. That had been a concern of his, and he was glad that Orihime was happy to play along. “Well then, let’s keep going. After all,” he smirked, “we have a show to put on at the club, and we wouldn’t want to disappoint the audience.”

“Don’t be nervous,” Hitsugaya ordered over the roar of the crowd. “You’re acting like this is the biggest dick you’ve ever seen!! And I know a slut like you has sucked some massive cocks!”

Orihime whimpered, visibly struggling to get more of his dick down her throat. As the crowd yelled out encouragements and catcalls, she managed to get another inch in her mouth, drool spilling out of her mouth. It dripped onto her tits and down Hitsugaya’s cock, and the crowd loved it.

The crowd was going nuts, throwing money on the stage as they screamed for more. Hitsugaya was the only one who saw Orihime give him a quick wink before taking a deep breath. He groaned happily as she somehow pushed her lips further down his hot pole.

At the hotel room…

The show had gone great, with both of them pocketing quite a bit of cash thanks to the wildly enthusiastic crowd. Now, alone in Hitsugaya’s hotel room, both of them found that they weren’t willing to call it a night just yet.

This kind of roleplay was a lot more fun than either of them had anticipated!

“Is that all you can take?!” Hitsugaya demanded as Orihime’s eyes started to roll up into her head, cheeks bulging and tongue lolling out of her mouth. “Haha! I thought sucking dick was your specialty!”

Actually, Orihime was doing a very good job; the things she was doing with her tongue were amazing, and Hitsguaya could feel that he was on the verge of shooting his load. But of course, his character couldn’t admit that, so he sighed loudly, grabbing onto her head. “Fine, you worthless bitch: if that’s the best you can do, then take this!”

“Let me show you to how to really fuck someone!” Hitsugaya roared, thrusting his cock into her tight pussy with a single mighty shove. He smirked in satisfaction when Orihime arched her back, shrieking at the top of her lungs as she came. “Hold on tight, whore: we’re just getting started!”

Pounding her as hard as he could, grabbing her jiggling tits with both hands to grope and pull on them, Hitsugaya was having more fun then he could have ever imagined. As Orihime screamed with pleasure once again, he hoped his time with her never ends.

Especially if they were as pleasurable as this!