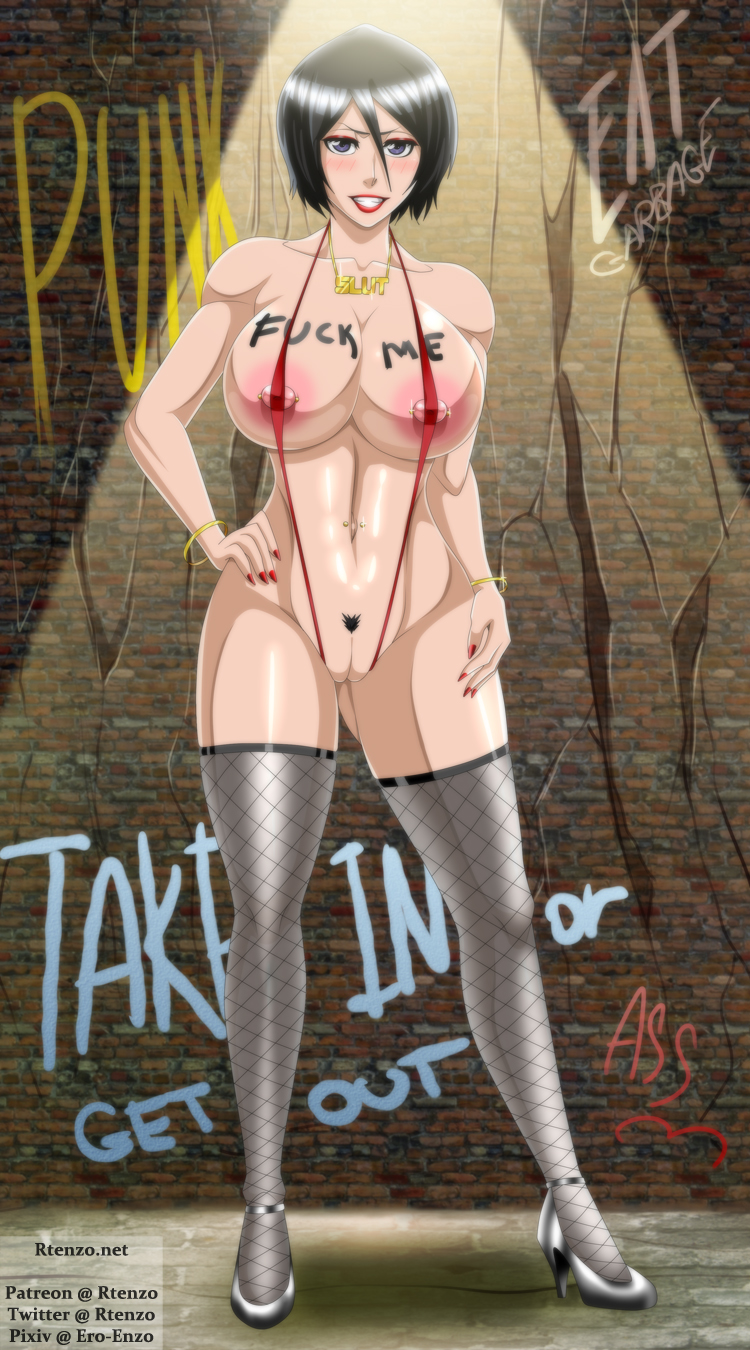 Rukia threw her cards down in disappointment when Orihime revealed her winning hand…again. “ARGH! How are you so good at poker?!” she demanded, half glaring, half pouting at the giggling orangette.

“I don’t know, but I’m glad that I am! And you lasted a long time, Rukia-chan,” Orihime reminded her as she gathered up her winnings.

“Only because I started wagering dares when I ran out of money,” Rukia grumbled. “Speaking of which…what are you going to make me do?” She paused and started to turn pale. “Orihime…I don’t like that look on your face…”

(Half an hour later…)

‘Did Orihime always have a mind this perverse and devious, or did it develop over time?‘ Rukia wondered to herself as she carefully sneaked down the streets and back alleyways of London.

Considering her attire only consisted of: two red strings that barely covered half her nipples and left her pussy bare; ‘FUCK ME’ written on her chest; a gold necklace reading SLUT; gold bracelets around each wrist; piercings in her nipples and bellybutton; fishnet stockings; and high heels, she had good reason to avoid being seen.

The dare Orihime had set up for Rukia was straightforward: Rukia had to get back to her hotel room. She could either try to sneak back, or (Orihime added with a wink) she could have some fun with her situation.

And while that was tempting, Rukia wanted to fuck on her own terms, not because of some dare, nor did she want to end up with some fat ugly bastard of a pervert.

‘So far, so good,‘ she thought to herself, peering around the corner of the alley. From what she could see, she was halfway to the hotel from where Orihime had dropped her off. At this rate, and with some more luck, Rukia would be back in her hotel room before she knew it-

“Eh? Is that you? That stuck-up bastard Kuchiki’s sister? Rukia, right?”

The voice was like a mountain speaking, and Rukia froze briefly, mentally berating herself. Had she really been concentrating so hard that Kenpachi Zaraki had managed to sneak up on her?!

Taking a deep breath, Rukia slowly turned around. To her total lack of surprise, she saw that Kenpachi was wearing only shorts and an unbuttoned shirt, leaving his feet and chest bare. And showing off his very impressive muscles…

Shaking her head, Rukia put on her best smile and tried to fight down her blush; thankfully, Kenpachi hadn’t said anything about her…clothing yet. “Yes, my name is Rukia, Captain Kenpachi. If I may ask, what are you doing here in London of all places?”

“Eh,” a massive hand was waved through the air in a dismissive gesture. “I heard the Western Branch has to fight against dragons.” For an instant, a bloodthirsty smile appeared on Kenpachi’s rugged face. “I’ve never fought against anything like that before, so I was looking for one. No luck yet though. And speaking of being out here at night…”

He looked her up and down, and Rukia felt her blush deepen. “What the hell are you up to?” he asked bluntly.

“Ah, I see. Well, good luck to ya.” And Kenpach started to simply…walk away?! Rukia stared after him in disbelief, and her mouth got ahead of her brain.

Chuckling, the captain of the Eleventh Division stopped and turned his head slightly, just enough that Rukia could see the gleam in his sole uncovered eye. “Don’t get me wrong, you look damn tempting. But I ain’t gonna fuck someone that I might break by accident; I might be a monster, but I ain’t that kind of a monster.”

While unexpectedly thoughtful of Kenpachi, Rukia still bristled at the idea that she was fragile. “I’m tougher than I look, sir,” she growled, before suddenly grinning as an idea occurred to her. “And besides, it would be a win-win situation for you!”

“Eh?” His interest perked, Kenpachi turned fully around, giving Rukia his full, intense attention. “What do you mean by that, girl?”

Abruptly reminded of the fact that Kenpachi was two feet taller and over a hundred pounds heavier than she was, Rukia swallowed, but forged ahead. “Either we fuck and have a good time just having sex, or my husband, brother, and friends find out and fight you-EEP!”

Kenpachi was suddenly right next to her, in the next best thing to a Shunpo. His bloodthirsty smile was back in full force, but he still had enough self-control to growl, “You sure about this, girl?”

For a moment, Rukia considered backing down…before deciding ‘To hell with it!‘ and jumping into Kenpachi’s arms to kiss him.

Grunting slightly in surprise, it didn’t take Kenpachi long to kiss her back; his hands grabbed Rukia’s ass, supporting her and groping her body at the same time. She could feel the power in his body as it pressed against hers. It made Rukia shiver, even more so when she felt his erection rubbing against her.

One of his hands left her ass long enough to literally tear his clothes off his body. “Brace yourself!” Kenpachi growled before thrusting his cock into her pussy.

Rukia’s eyes went very wide as her pussy was filled up; if Kenpachi’s cock wasn’t the largest she had ever taken, it was definitely up there. “OH FUCK!” she yelled, leaning forward to claw at his back, pressing her breasts against the hard muscles of his chest.

“Having second thoughts?” Kenpachi teased, easily readjusting his hold on Rukia’s smaller body and pumping her up and down on his cock. He didn’t mind her scratching his back with her sharp nails; hell, it added to the whole experience!

“N-Not a chance!” Rukia fired back, leaning her head back to glare into his grinning face. To prove it, she began to move with him, helping him fuck her hard. “Is that all you have?!” she challenged him, her face getting redder as her body, especially her pussy, got hotter.

His grin widening to show off a few more jagged teeth, Kenpachi didn’t answer with words; instead, he simply grabbed Rukia around the waist and began to really slam her down onto his cock!

“AH! OH! UGH! ARGH!” Rukia screeched and yelled with each thrust; her tits flopped wildly as she bounced, at least until Kenpachi seized them both in his mouth, sucking on them both at the same time. “OH MY GOD!”

It wasn’t just Kenpachi’s size that was impressive, Rukia quickly realized; it was the power behind his fucking. He was easily manhandling her, the entire weight of her body like nothing to him. His balls were slamming into her ass hard, almost enough to bruise, and his cock was pushing so deep and hard into her pussy. Sweat coated her body and began dripping off it.

And as Kenpachi roared and filled her pussy with his seed, Rukia screamed as well; maybe this really hadn’t been such a good idea.

“Damn, that was pretty good!” Kenpachi praised her, lifting his head from her tits and slowly pulling his dick out. “I guess you are stronger than you look!”

Despite how worn out and sore she felt, Rukia smiled with pride.

Said smile quickly died as Kenpachi enthusiastically went on. “So let’s keep going! I can’t wait to feel that tight little ass of yours wrapped around my dick!”

Rukia gaped at him, mouth open, which proved to be her undoing. Quick as a whip, Kenpachi spun her around, hands still around her waist, but now her ass was pointing towards him. Feeling his still hard erection pressing against her ass, she sucked in a deep breath to tell him to wait-

Coming half awake, Orihime sat up and looked sleepily around the room. “That’s funny…I thought I heard Rukia-chan screaming. Hmm…must have been my imagination; I’m sure she’s fine.

And she promptly went back to sleep.

It’s been a while since rukia made an appearance! Hope to see more of her and orihime!

Definitely, I hope you’ll like whatever else she is in. I plan to post more of her this month 👍

I very much want to see just how dirty Orihime is in this!

Good chapter as usual. Nice explanation given, with how Rukia got into this kind of situation with such a slutty outfit. It really makes Orihime a whole lot more naughtier than I would have imagined. And Zaraki is just such an underused male, his more rough, no time for fun, side is really entertaining and unique. It kinda reminds me of A from the Naruto stories here. Don’t really know what to think of how it came to the sex scene though. Rukia mentioned that Ken could either fuck her or fight against her husband (Renji), brother (Byakuya) and friends (Ichigo, etc.). Wouldn’t Zaraki be the first to go for the second option? Either way, nice sex and the ending part was hilarious.

Great chapter. Glad to have other men get in on the sex-action (sextion?) as well and not just the obvious bunch.
8/10

Wow! Not something I expected from either Orihime OR Rukia. But this made me learn three things in this chapter.

First, Orihime is kinda evil when she feels like it. Especially when she plays games and does dares like this. Haha.

Second, Rukia really should have thought this through a little more. More so when she went with have to have fun with her position. I love you to death, Rukia, but next time pick your moves a bit more carefully. That said, she was pretty damn hot here!

And finally, Kenpachi. What else is there to say about him? He was a real monster in the original story, and he’s a monster here too. Including how he effortlessly manhandled Rukia like a wild animal! Too bad she’ll be feeling this for a while. XD

Before I forget, the picture of Rukia is stunning! Probably one of the best she’s had here.

Thank you for your thoughts Hiryu. I’m happy you like the various elements of the story in this one. The writer did a great job with this one, it was nice to see Zaraki 👍

Orihime is a perv lol Or maybe she wanted to give Rukia a hard time? many possible reasons