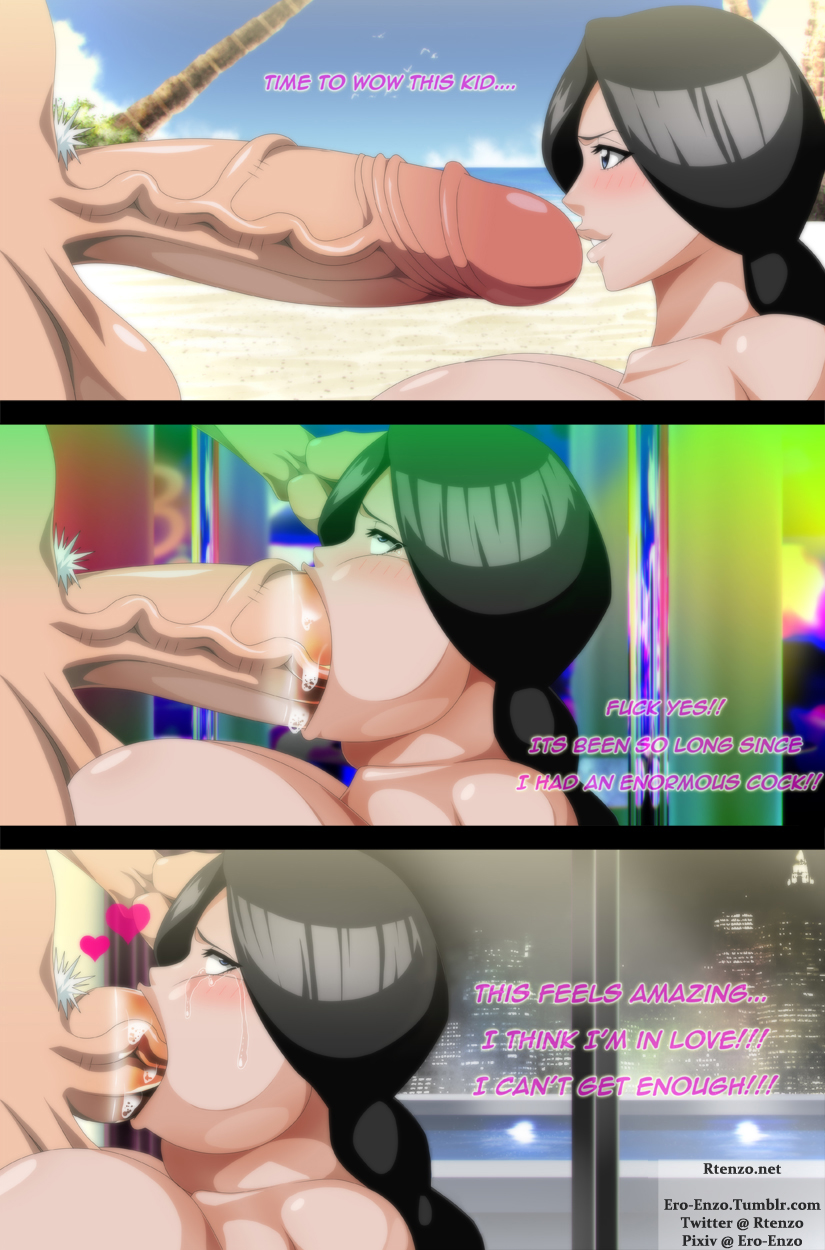 Unohana couldn’t stop herself from giggling at Hitsugaya’s sardonic commentary on his current situation. Even the half-hearted glare he sent her way didn’t stop her. “Look on the bright side, Hitsugaya-san.” At his skeptical look, she smiled. “For one, you’re in much better shape than poor Yushiro-san.”

That gave Hitsugaya pause, then he chuckled slightly. “…good point. I may be in crutches but hes in a full body cast.”

Unohana nodded. “It is also a beautiful sunny day on a lovely beach…”

“Also true, though this sand is hell to walk through with crutches,” Hitsugaya grumbled, belied by the small but growing smile on his face.

“And, last but not least, you get me all to yourself,” Unohana finished with a serene grin and slow stretch, drawing plenty of attention to her voluptuous body, barely contained and covered by an extremely skimpy bikini.

That finally got a laugh out of Hitsugaya, to Unohana’s satisfaction. “That’s better; they say laughter is the best medicine after all. Though…” she gave him a side-long look, choosing her words with care. “I know a much better medicine that helps with health and recovery…”

Hitsugaya picked up on her meaning quickly, and after an initial stiffening, he looked around furtively before leading her to a more secluded area. “I could definitely use something to help me relax,” he told her, his erection stirring as Unohana quickly and easily stripped out of her clothes. “I don’t think I’m going to be able to do much though…”

“Don’t worry about it,” Unohana assured him as she slowly pulled down his swimming trunks, licking her lips when his cock sprang into view. “Just relax and leave everything to me…”

‘Time to wow this kid…‘ she thought with a small blush, getting on her knees in front of him. She started out slow, licking and kissing the very tip of his dick, delighting in his moan of pleasure, and the way his dick swelled even more.

“Just what the doctor ordered,” Hitsugaya joked, closing his eyes as Unohana started to take more and more of his cock into her mouth. “I’m feeling better already…”

Had her mouth not been busy, Unohana would have seconded that emotion.

“DAMN, BOTH OF THEM ARE HUGE!”

“FORGET THAT, HER TITS AND ASS ARE ENORMOUS!”

These and similar comments rained down on the pair, not that either Hitsugaya or Unohana paid them any attention. Hitsugaya was grunting and panting, one hand buried in her hair as he pumped Unohana’s head back and forth. The other hand was hanging onto his crutch, keeping him upright.

And despite the lingering pain in his legs, he was feeling great; Unohana’s mouth and tongue were working wonders on his cock, and her tits were nestling his balls, her nipples pressing against his thighs.

Yeah, he could definitely get used to this.

She wanted…no, she needed MORE!

Eyes rolling back into her head, jaw stretched to its limit, and a huge dick jammed into her mouth, Unohana couldn’t have been happier.

‘This feels amazing…I think I’m in love!!!‘ she thought through her deep haze of pleasure, her tongue working as much as it could even as Hitsugaya’s cock inched ever deeper down her throat. ‘I can’t get enough!!!‘ Unohana moaned, the sound vibrating in her throat and reverberating through Hitsugaya’s dick.

It was almost enough to make him blow his load, but with a final wordless shout of effort, he thrust his hips forward while simultaneously pulling on her head. Her nose was buried in the white hair of his crotch and her tits were jammed hard against his legs, her rock hard nipples digging almost painfully into his skin.

It took a few minutes for the two of them to move, but they eventually separated, Hitsugaya panting and Unohana still in a daze, absently wiping her mouth. Then Hitsugaya suddenly started chuckling, causing Unohana to come back to herself with an inquisitive look at him.

He spread his arms, showing his lack of a crutch; it lay discarded on the floor. “I feel completely fine…hell, even better than that,” he declared, before smirking. “I guess your sexual healing did the trick.”

Startled into a giggle, Unohana then gave him a predatory look. “My methods may be effective, but I think I should give you a very thorough physical examination…just to be safe.” The whole time, she was slinking towards him.

“The doctor is always right,” Hitsugaya agreed with a snicker, meeting her halfway.

Needless to say, neither of them got much sleep that night.

I think I need a BJ from Unohana now… Preventative medicine!

Will we ever get Yushiro fucking Masaki?

Will we ever see Masaki at all?

Never thought Hitsugaya would be in far better shape than Yushiro, but I guess it’s better to be walking around on crutches than being confined to being on a bed in a full body cast like he said. Least we know who got the worst end of it. LOL.

Seriously, I liked how it was handled, as well as how they were written and utilized from beginning to end.

Not only that, I really liked how it was a gradual effect rather than being just a simple one and done situation for them. But at least Toshiro’s next to fully healed! Though the good doctor just wanted to be totally sure.

Based on what the manga has shown, Hitsugaya is way stronger, so he’s able to endure more damage. And ya, Unohana’s BJs are super effective, shes the best healer afterall!

Thank you for the feedback Hiryu~