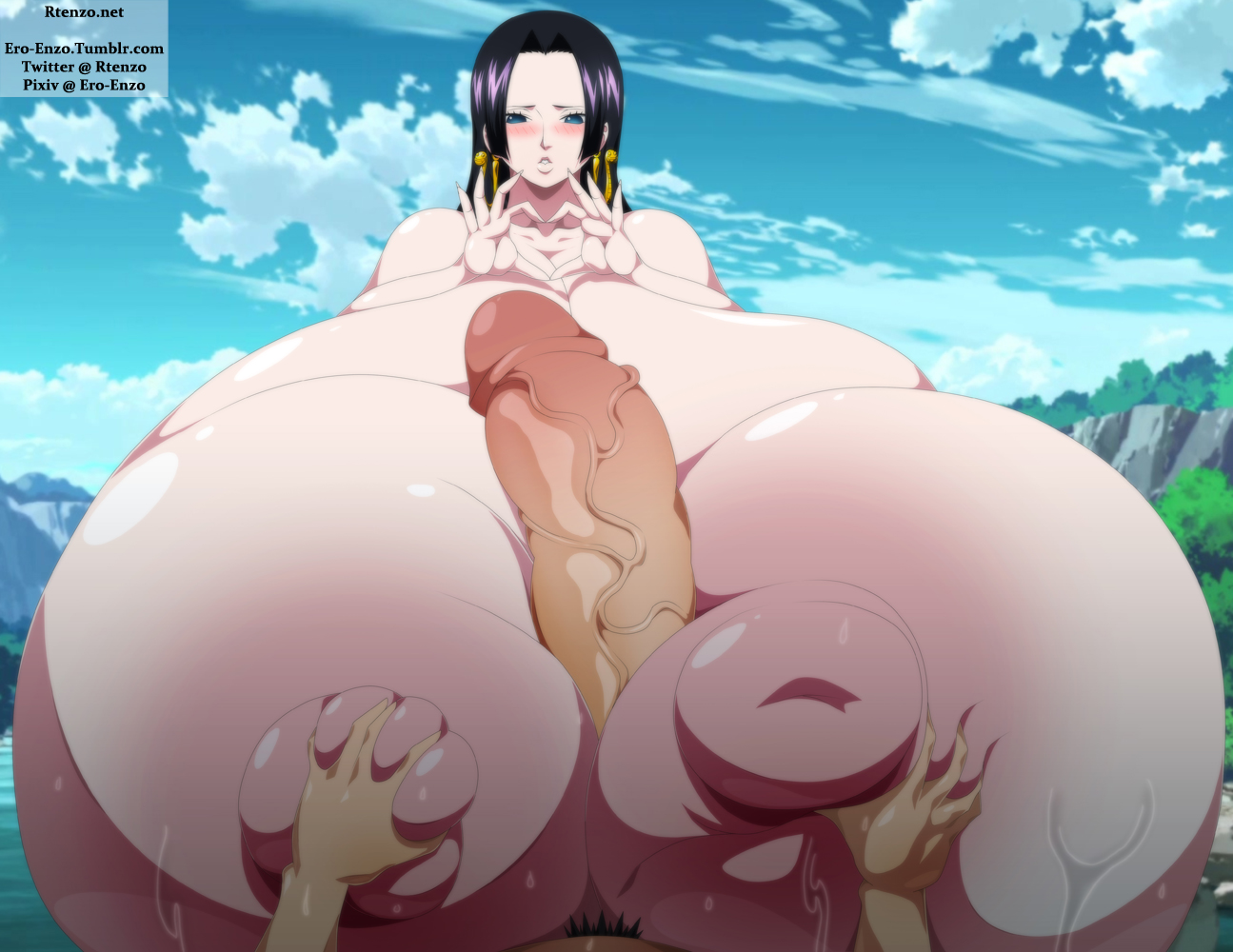 “HMM! MMMMMMH! AAAAAAAH!“ the moans and pants of Boa Hancock and the love of her life, Monkey D. Luffy, echoed through the thick jungle of the remote island, on which the future Pirate King is currently training under the guidance of Silvers Rayleigh.

As she got her pussy thoroughly pounded by the up and coming rookie pirate and going abso-lutely crazy on her future husbands steamy cock, the Pirate Empress had a small moment of sanity, where she reminded herself of the promise she made the two women who came up with this plan.

When a letter from the World Government arrived, with which she was ordered to help out the navy in a conflict between the Big Mom Pirates and the Beast Pirates on a small Island, she was quick to dismiss it since they would forgive her anyways because of her beauty.

Fearing a subsequent attack of the marines, Gloriosa and Marguerite came up with the idea of having her captain “train” with Luffy and tell him all about the conflict in the New World. Since he would, no doubt, be worried about her, he would tell her how much she meant to him and tell him to come back safe.

It was a totally bullet and foolproof plan with no downsides whatsoever and Gloriosa even managed to convince Rayleigh, that it would be good for Luffy’s stamina and Haki training as well.

Once Hancock told Luffy that this sort of wrestling will help him to deepen his knowledge about Haki, the young captain was quick and eager to do so.

Leading to both of them laying on the jungle floor, with Luffy’s cock plunging deep into the pussy of the most beautiful woman in the world, with jackhammer-like speed and force.

“YES LUFFY!! Claim me here on the ground as yours. MAKE ME YOUR BITCH!!!“, she screamed at the top of her lungs, scaring away any last one of the mighty beasts that roam the secluded island.

“Shishishi. You like that, don’t you?“, Luffy asked as he pulled his cock out of her pussy, only to slam it even harder into his partners tight ass.

And indeed, the frantic pace, as well as the tightness of her ass and the Haki that covered the young mans cock, almost set his cock ablaze, something that the Super Rookie was also quick to notice.

“WOW!“, he said in between pants, noticing that his time in Gear Second was soon to be over. “Now we’re getting somewhere. Shishishishi.“

“MMMH, LUFFY!!! SHO MUSH CUMMMMM! It’sh filling muh shtomach and comming out muh MOUPHHHHHHHH!” Hancock gurgled, her mouth filled to the brim with the delicious spunk of her lover.

While the young captain tried to regain his breath, the Pirate Empress lifted her body from the cock with a loud and audible ‘PLOP‘ sound.

Before Luffy could ask what she was doing, Hancock moved herself down his body, with her tits engulfing his now semi-flaccid dick. “Luffy-Kun, I know that wasn’t everything you had.“, she purred with a loving look on her face. “Show me how far you can go for your crew and ME.“

With that, she began to plant numerous kisses on the completely covered cock. Luffy sensed that he couldn’t accomplish much with his current size so he moved his thumb up to his mouth and blew with all of his might into it.

His cock began to swell in size and girth, catching the empress, who just wanted to start sucking it, totally by surprise and with one final push emerged from the giant masses of flesh that contained it previously.

Her eyes fixated only on the huge erection between her tits, Hancock quickly formed a heart symbol with her hands in order to appreciate this gigantic dick whose veins pulsated with a steady rhythm, rubbing on and triggering all the enhanced erogenous spots of her boobs.

Not wanting to be outdone by anyone, Luffy moved his still shaking hands towards her nipples to twist and tweak the steel hard nubs, his hands sinking into the fleshy, yet somewhat firm, amounts of flesh, which caused the warlord to moan in arousal, her pussy spraying juices into the lake behind them.

“OOOHH, LUFFY! Give me that giant cock of yours! Gimme that D!!!”

“Give you my D???”, he asked, tilting his head to one side. “I told you already Hancock, I’m not gonna marry you. But I can happily give you more of that, if that is what you want.“

Covering the tip of his cock in Armament Haki, he began pumping it between the woman’s tits up and down, all while she kissed and licked it frantically.

Hancock were sure: this was without a doubt the best day of her entire life! Aside from the one of course, where she fell in love with this man.

(Half an hour later)

After a while, the now shrunken version of Luffy managed to crawl back towards the clearing of the lake where Hancock still layed, quivering in the aftermath of the huge orgasm they both had a few moments ago and covered from head to toe in his delicious spunk.

“That. Was. AMAZING!“, she panted with a huge grin on her face, while lifting herself off from the ground.

The young captain sighed in relief since he was still completely wrecked from the amazing paizuri, Hancock gave him.

Just as she was about to stroke the flaccid cock back to it’s ‘real’ size, the Den Den Mushi in the pocket of her discarded dress made its iconic ringing sound, causing the empress to pick it up since only her crew members could call her, meaning it has to be something urgent.

After her talk with her younger sister Sandersonia, the expression on her face shifted. “I’m sorry, but we have to end it for today. I have to leave in order to help the marines with some stupid conflict in the New World.“, she said annoyed.

“The New World?”, Luffy’s eyes lit up as he jumped up with fresh energy surging through his exhausted body. “Hancock, I need you to come back from there! That training was awesome and I know that it will only help me to become stronger for my nakama, by training with you and old man Rayleigh.“

‘He… he needs me?!‘ Hancock thought to herself, her face becoming comedically red by the misinterpreted compliment.

“Y- Yeah, sure Luffy-Kun.“, she stammered as she turned away, so that she doesn’t need to look at his immaculate appearance. Now that her arousal has been slightly quelled by the harsh pounding she received, she was quickly becoming her stammering, shy persona around the man who turned her life upside down.

“I promise, that I will come back to help you with your training once again.“

“And I promise, that the next time we will see each other, I will show you just how much stronger I have become. I won’t lose to you anymore!“, he proclaimed loudly with his arms raised above his head and his hands clenched into fists.

After a tearful goodbye from the Luffy and Silvers Rayleigh, the Kuja Pirates set sail to meet a navy vessel that will bring both Boa Hancock and the potential future member of the Kuja Pirates, Marguerite, who was rewarded with a promotion for the brilliant plan she has come up with, into the New World.

Who knows what will happen to them there…

If you do go ahead and continue this and make this a series is it possible for you to make a love triangle between luffy, Hancock, and Robin?

OOOH, you’re in then for a treat! Without spoilering too much, let’s just say that there will come a timeskip, where Luffy trains with Rayleigh to become stronger. This story is basically during these two years. With the cumthrough, I didn’t know that was considered as fetishy but I thougt if there is a world were something like this makes sense, it has to be One Piece.
I appreciate your support!

Amazing Chapter Mr. Akrononym, I can’t wait to see what other stories to bring

Happy to see that you like it 👍. I really hope, that I am able to continue this potential series or writing in general.

Wow i never expected a new writer for this image. Incredible job on your first story on this site, Mr. Akrononym! I like the sex scene and the details of when it took place. Hope to see more stories from you. 😁👍👍

Thanks for the kind words Nameless, I really appreciate it!!
I thought, that there is always place for more One Piece and I hope I can continue this story in the future, but we will see…

If you do go ahead and continue this and make this a series is it possible for you to make a live triangle between luffy, Hancock, and Robin?

Really surprised that it came out so quickly but still happy😊.
I hope you like the story and I look forward to read your thoughts!
Looking forward to write potential future stories.

Well that was a fun little “training” exercise~

Yeah, it was my first story ever and Luffy is a difficult character to write in these kind of situations (for me at least) but, yeah… thanks for your kind words.