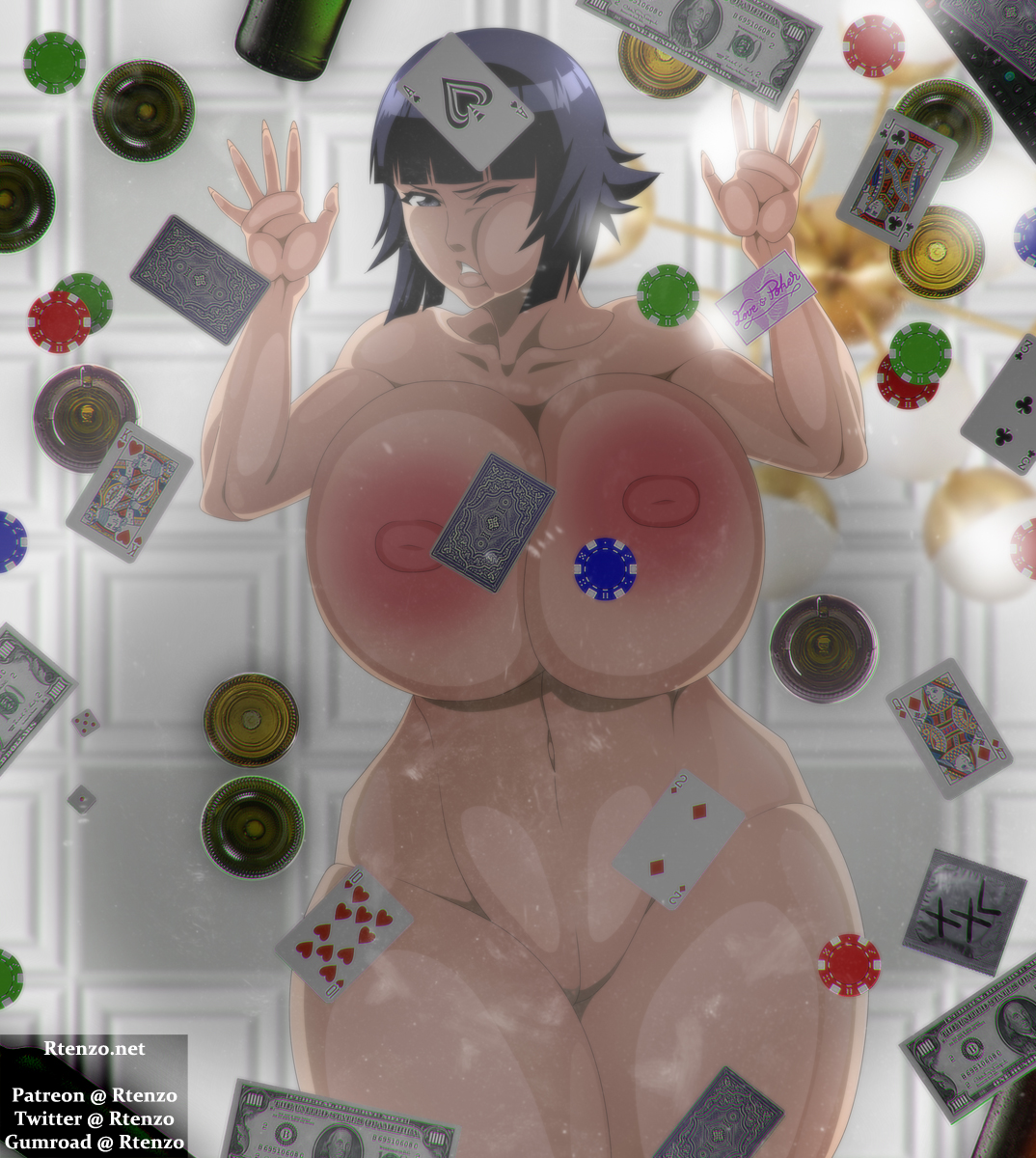 If she was being honest with herself, Sui-Feng would have to admit that poker night…

“Looks like you lose again, Sui-Feng-chan!” Yushiro giggled as he swept his earnings into a pile and pulled them towards himself.

…wasn’t going as well as she thought it would. With many of their friends on vacation in London, she had agreed, mostly out of boredom, to a night of gaming with Yushiro and Hanataro.

And she thought her chances of winning were good. After all, she was the head of the Onmitsukido, a Captain, and had centuries of experience in interrogation and intelligence gathering. Yushiro and Hanataro were much younger and inexperienced; playing poker with them should have been an easy win for her!

Yet here she was, blushing and looking down at her pitiful pile of poker chips. Even Hanataro was doing better than she was!

“Um, Captain Sui-Feng? I can loan you some chips…”

She almost snapped at Hanataro, but one look at his earnest expression killed most of her annoyance. It was clear he was genuine in his attempt to help, so she gave him a small smile. “No, thank you, Hanataro-kun. I’ll sink or swim on my own; I’m a big girl.”

“You really don’t have much left though,” Yushiro pointed out cheerfully, chuckling at the annoyed look she shot at him. “What are you going to do if you lose again?”

Good question, and one that Sui-Feng hadn’t really thought of before now. Therefore, she blurted out the first thing that came to mind. “Then I’ll just bet my clothes instead.”

Hanataro promptly began blushing, while Yushiro immediately sat up straighter, his eyes lighting up. “Oh! Now THAT sounds like a much funner game!” He shoved the deck over to Sui-Feng. “It’s your turn to shuffle and deal! Hurry, hurry!” He was bouncing in his seat with excitement, and Sui-Feng couldn’t help but smile at the sight as she shuffled the cards.

Sui-Feng’s right eyebrow twitched as she watched the last of her chips and all of her clothes being taken by Hanataro, who was looking apologetic, his face bright red in the face of her nudity.

In contrast, Yushiro was staring unabashedly at her; Sui-Feng could almost see the stars in his eyes, and she could certainly feel the lust in his gaze, making her squirm slightly in her chair.

“So, Sui-Feng-chan, what are you going to do now?” When Yushiro smiled like that, he reminded her of a cat, all smug but adorable and knowing it. “Are you going to admit defeat?”

Tempting, but Sui-Feng would be the first to admit that she was incredibly stubborn. Sometimes it was a bad thing, but it had also carried her through several hard times. She shook her head. “No. I might not have any chips or clothes left, but I can still bet my body.” After all, it wasn’t like she hadn’t had sex with both of them before. “If I lose a round, then the winner can fuck me however they want!”

It was like a fire had been lit in Yushiro’s eyes, and even Hanataro lifted his head, eyes wide and a determined expression on his face. The cards were dealt out in a blur, with all three of them concentrating hard, the desire to win emanating from them.

Sui-Feng grunted as her tits and face were pressed against the glass table they were playing on. She could feel some cards and chips pressing against her boobs. “Yushiro-sama, please don’t press down on me so hard,” she said from the corner of her mouth. Almost instantly, the pressure eased, and she could breathe easier.

“Ah! Sorry about that, Sui-Feng-chan! I guess I got a little too excited!” the purple-haired young man apologized, rubbing his rapidly hardening cock against Sui-Feng’s pussy, which was also getting wet in a hurry.

“So I can…mmm…feel,” Sui-Feng replied, interrupting herself with a moan, to her mild embarrassment. ‘No matter how many times Yushiro fucks me, it still feels amazing each time!‘

“I never get tired of fucking you, Sui-Feng-chan!” Yushiro enthused as he pushed his huge cock into her pussy, unknowingly echoing her thoughts about him. “It always feels so great!”

Feeling a rush of affection for Yushiro, Sui-Feng moaned loudly, digging her fingers into the edges of the table. “Mmm! And no one else can fuck me like you do, Yushiro-sama!”

Hanataro sat off to the side, feeling awkward, but also turned on. After all, he was watching a real life sex show just a few feet away from him. It kindled an unfamiliar sensation in his chest: competitiveness. He wanted to be the one to win and fuck Sui-Feng next.

“Fuck, your pussy is so tight! It’s squeezing my dick incredibly hard!”

“C’mon, Yushiro-sama! I know you can do better than that!”

(After the next round…)

“AHHH! D-Damn, Hanataro-kun! Has your dick got even bigger since last time?! It feels like it’s going to split my ass!” Sui-Feng groaned as she slowly lowered herself onto his erection, biting her lower lip.

Hanataro was blushing again as he gripped Sui-Feng’s hips, helping to steady her. “Y-Yes, it has. I’ve gone to see Unohana-sama, and she’s going to help me with it; it’s kind of becoming a problem.”

“Not a problem tonight though!” Yushiro commented from the side, not at all upset about losing the last round to Hanataro. He was watching with eager eyes, his cock rising again.

“Do you want to stop-” Hanataro started to ask, only to be silenced by Sui-Feng kissing him.

“Not a chance!” she growled as she broke the kiss, forcing herself even lower onto his dick. “It may have hurt at first, but now?” She smiled at him, before wrapping her arms around his head and pulling it in between her boobs. “Fuck my ass as hard as you can, Hantaro-kun!”

Obedient as ever, Hanataro complied, while also kissing and sucking on Sui-Feng’s tits.

Yushiro giggled quietly as Sui-Feng once again lost herself in her lust. ‘I wonder if Sui-Feng is even trying to win now, hee hee hee!‘

(Yet another loss from Sui-Feng…)

“That’s it, take my cock as deep as you can!” Yushiro encouraged her, hands on his hips as Sui-Feng slowly gobbled away on his dick. He grinned, surprised and impressed, when she managed to deep throat it all, her eyes very wide and her cheeks looking like a chipmunk’s. “Wow! You’ve gotten even better at this!”

A glimmer of pride appeared in Sui-Feng’s eyes as she began to pump her head back and forth, sucking as hard as she could as her tongue licked the underside of Yoshiro’s cock.

“I love how your huge dick feels between my tits! Faster and harder, Hanataro-kun! I can take it!”

Swallowing, the medic tightened his arms around Sui-Feng’s breasts and moved his hips faster. Seeing Sui-Feng writhe underneath him as he pumped his enormous whale cock through her impressive cleavage, he could feel himself getting even more turned on.

And even more determined to win again.

Sui-Feng sighed happily as she relaxed in the bed, Yushiro and Hanataro on either side of her. At some point (her memory was a little hazy), they had all foregone playing poker entirely, and had simply fucked, with her in the middle, taking on two huge cocks.

Her entire body was sore, especially her tits, ass, and pussy, and she had been completely dominated in poker. But…

‘I may have lost every game, but I can’t say I’m unhappy with how the night turned out!‘

She’s not in this story….

Note to self, don’t play poker with these guys unless you’re ready and able to go all night long. Especially with strip and sexual poker. LOL

That said, this was a fun little chapter from beginning to end. And I’m really surprised Sui-Feng took all that while remaining conscious. Makes me wonder how things would’ve been if she won a game. O_O Of course the picture itself was pretty good too. Like, really good!

Either way, nicely done. Can’t wait for what’s next. 😀

Always appreciative of your thoughts Hiryu, thank you for commenting 🥰

Now, that’s definitely one interesting promise, this chapter presented. I like that not every Bleach character is in London at the exact same time, it makes it more grounded I think. Love the interaction between Yushiro and Sui-Feng, Hanataro is a character that I don’t care about that much but he is still very enjoyable in these stories! The sex was one of the more gimmicky sort, with it being split into several parts, whenever Sui-Feng lost. Could have been better in my mind if each section was expanded a little bit more but it was good nonetheless.

Pretty isolated chapter with not much connections to the other ones but getting more of Sui-Feng is a win!
7/10

Happy you like the premise and how the gambling game went! It is definitely one of the more unique reasons to get them to have sex lol